Here’s why. The strategy is a game changer with global impact.

Geely, China’s largest domestic automaker, disclosed that deliveries plunged 29% in June compared to a year ago, and that they’re down 15% in the first half. And it slashed by another 10% its already lowered forecast for deliveries for the whole year. This type of disclosure is now a regular feature of China’s dramatic auto slowdown.

New-vehicle sales in China dropped 9.4% in June, compared to a year ago, to 2.06 million vehicles, according to the China Association of Automobile Manufacturers (CAAM). It was the 12th month in a row of year-over-year declines. For the first half of 2019, sales were down 12%. If sales continue to decline at this rate, they will drop to 21 million vehicles for the whole year, the lowest since 2014, representing a 15% drop from the peak in 2017 (estimate for 2019 in red): 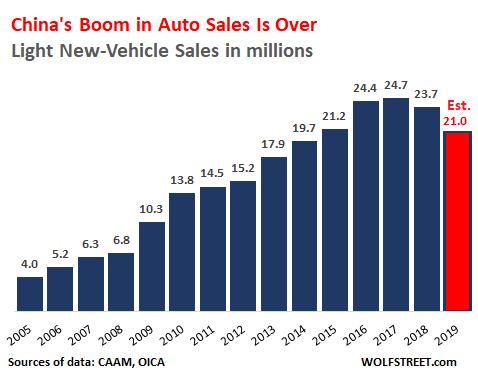 But the boom had been mind-boggling: From 2005 through 2017, sales sextupled, from 4.0 million vehicles to 24.7 million vehicles. In China’s managed, pump-primed, growth-no-matter-what economy – at least that is what it was – there was not a single year of declines in the data going back to 1991. But that changed in 2018 with a 4.1% decline. And now there is this awful 2019. 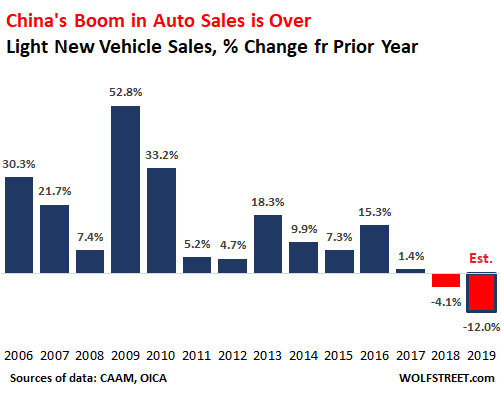 But “New Energy Vehicles” are booming.

In June, BEVs accounted for 6.3% of total new vehicle sales, up from 0% just a few years ago, putting BEVs on track to hit 1 million in sales for the year. Starting to be real numbers!

Where’s the government stimulus everyone is waiting for?

In China, the government runs the show. So if sales fall across an industry the size of China’s auto industry, by far the largest in the world, everyone looks to the government to do something, and come up with some big-fat stimulus package that will put sales back on track, as it had done so miraculously during the Financial Crisis. Everything revolves around incentives. And consumers are well-trained by now to play the game.

Many industry voices, including the China Association of Automobile Manufacturers, have exhorted the government to come up with incentives.

And those well-trained consumers waiting for incentives have been disappointed. There are no new incentives on cars with internal combustion engines (ICE). The government has not relaxed the limits on the issuance of license plates for ICE vehicles. And car buyers have to grapple with new emissions standards that 15 cities and provinces – accounting for 60% of new-vehicle sales in China – are implementing ahead of the government-imposed deadline in 2020.

While the government is spurning incentives for ICE vehicles, it is heaping incentives on New Energy Vehicles. Yang Jian, managing editor of Automotive News China, explains that this is the government strategy going forward, and the industry needs to come to grips with it:

The days are gone when China’s leaders pursue economic growth at any cost. When it comes to describing economic policies, the catchphrase used by government officials these days is “switching from old to new economic drivers.”

Under the new approach, traditional gasoline-powered vehicles, in general, are deemed an “old” economic driver that results in air pollution. While they support economic growth, they need to be improved to reduce emissions, the thinking goes. That’s why the central government is pushing China’s cities and provinces to upgrade vehicle emissions standards, ahead of schedule, regardless of the cost to carmakers and dealers.

By contrast, the electrified vehicle sector is seen as a “new” economic driver capable of boosting economic growth without inflicting damage on the country’s environment. Electrified vehicles have won key support from the top echelon of the Chinese government.

The incentives for NEVs, that were adopted in 2016 for a five-year period to encourage innovation and build the industry, are going to be phased out at the end of 2020. These incentives are under a carbon-credit program with quotas for electrified vehicle sales. To get the carbon credits, an automaker has to reach NEV sales equal to 10% of its annual sales in 2019, and 12% in 2020, after which the credits were supposed to end.

“The proposed changes to the carbon credit program, once implemented, will force automakers to keep ramping up electrified vehicle output beyond 2020,” says Yang Jian.

And the government is unlikely to come to the rescue of overall auto sales “with a heavy dose of incentives,” Yang Jian says, “as long as it can continue to prop up electrified vehicle sales.”

In other words, this is not the era of the Financial Crisis, where the guiding principle was growth-at-all-cost; instead the government will likely let the overall market slow down as long as NEV sales boom. This fits into China’s long-term strategic decision to become the dominant global leader in NEVs and auto-battery systems. And ICE vehicles are left to fend for themselves.

80 comments for “China Auto Sales Spiral Down, But This Time It’s Different: Government Refuses to Bail Them Out with Big-Fat Incentives”