Revisions show the slowdown expected this year hit last year, and now is the rebound. If there’s ever a time for the Fed to not cut already low interest rates, it’s now.

Economic growth in the US for the second quarter once again exceeded consensus expectations, after blowing past them in the first quarter. This morning, the Bureau of Economic Analysis reported that the economy, as measured by “real” (inflation-adjusted) GDP, grew at an annualized rate of 2.1%. It was powered by the hottest consumer spending growth since Q4 2017, and the fifth highest quarterly growth in the past 52 quarters (since Q1 2006).

But the GDP growth rates for 2018 were slashed, particularly for Q4. It is now apparent that the slowdown that was expected this year but didn’t arrive actually took place in Q4 last year, and what we’re seeing this year is a rebound: 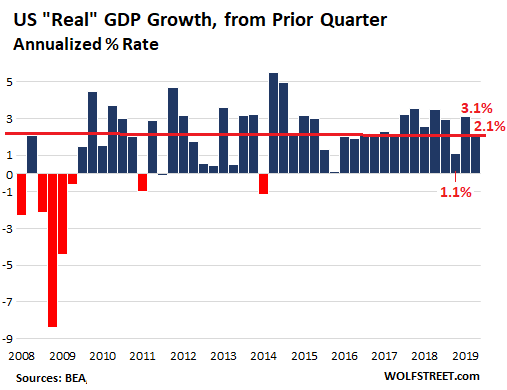 Consumer spending, which accounts for nearly 70% of the economy, grew at an annualized rate of 4.3%, adjusted for inflation, blowing past expectations, after having been lethargic in Q4 last year and Q1 this year. It was the fastest growth rate since Q4 2017 and the fifth fastest since Q1 2006.

By category, consumer spending on durable goods soared at an annualized rate of 12.9%, adjusted for inflation; and for non-durable goods, it jumped 6.0%. This brought the growth rate for spending on all goods combined to 8.3%. Spending on services rose 2.5%. 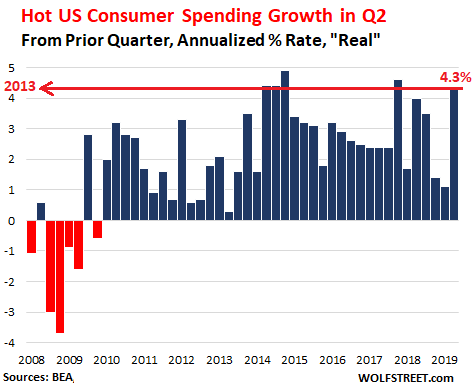 A decided weakness in the data was business investment. Gross private domestic investment fell 5.5%, including at 10.6% drop in investment in structures. And it includes a big drop in private inventories. This confirms the phenomenon we have seen for months now in what I now call the “transportation recession,” where companies, sitting on bloated inventories they acquired to frontrun the tariffs, are cutting back orders to whittle those inventories down, and therefore shipments decline.

In other words, the slowdown that was supposed to hit this year hit in Q4 last year, and the economy already muddled through this episode and is now bouncing back, with GDP growth averaging 2.6% this year so far.

The revisions caused the annual growth rate of 2018 to be revised down to 2.9%, still the highest rate since 2015 (also 2.9%), but below the illusory 3% level that the US hasn’t reached since 2004. The chart shows the revised annual rates of growth adjusted for inflation, with 2019 (green) being the average of Q1 and Q2. This is not a chart of a rate-cut economy: 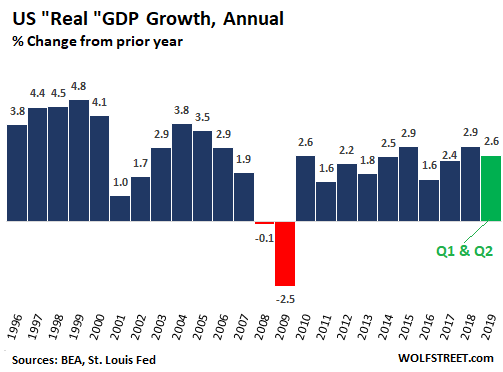 The economy is still powered by very low interest rates, massive government spending growth, and consumers that are working and making money and spending money. Some business investment has taken a wait-and-see approach, but hiring is strong, companies complain about the difficulty of finding qualified workers, and unemployment claims hover at multi-decade lows. If there was ever a time for the Fed to not cut already low interest rates, it’s now. The economy is, as Powell has stated many times recently, “in a good place.”

Despite the trade wars, tariffs, and counter-tariffs, consumers and companies keep plugging, and the world has not come to an end. Read… World Trade in Face of Tariffmageddon, Trade Wars & Manufacturing Slowdown