They’re engaged in a highly competitive and saturated market, dominated by finicky Americans who demand top quality, but who drive their vehicles less.

For the past 12 months, the total ticked up to 3.23 trillion vehicle-miles. And that’s a new record. The Great Recession had caused a multi-year decline in vehicle-miles from the record in 2007. By 2012, driving started to pick up again, and by 2015 new records were getting hammered out (the figure for 2019 is the 12-month total through April): 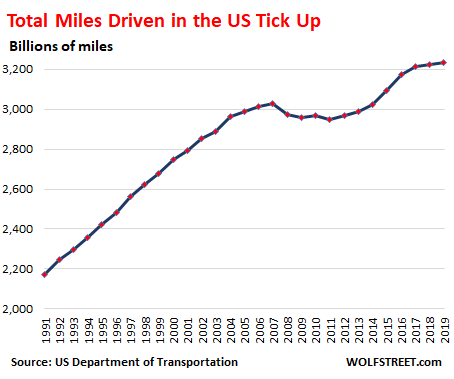 So are people back on the road with their pre-crisis driving patterns, burning up ever more miles as they go through life? Nope. Because there are now 11% more people of driving age than there were in 2007.

In 2007, based on Census Bureau estimates, there were 233.2 million people aged 16 or older in the US (who were not in penal and mental facilities, homes for the aged, etc. and who were not on active duty in the Armed Forces). By now, there are 258.9 million of these potential drivers.

The total miles driven divided by this “civilian noninstitutional population” of 16 years and older gives us an estimate of the miles per potential driver. And this shows an entirely different situation.

And there has only been a tepid recovery since then, which started fading again over the last two years: During the 12-month period through April, the average potential driver drove 12,500 miles — less than 22 years ago in 1997: 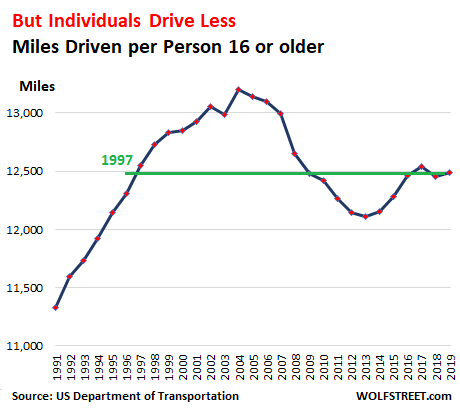 Could the fading recovery of miles driven over the past two years be caused by the growing prevalence of Lyft and Uber? Statistically, no, because the Lyft and Uber vehicles are also counted and are also in this total of miles driven per driver, which adds up, given how much these drivers circle around to pick up their fares, and then drive with their fares.

Could it be that in the big urban areas, people are trying to live closer to where they work so they don’t have to drive, or have to drive less, or can use mass transit? Yes, perhaps marginally, because this is one of the big but very slow changes underfoot in urban areas: More people live in big apartment or condo buildings, many of them brand new, in dense and central locations with hopefully less brutal commutes.

And working remotely, where workers don’t have to come to the office every day, might also be starting to have a tiny bit of an impact. This includes the growing army of gig workers, and it includes people like me who run their global media mogul empires from their homes.

Miles driven per “vehicle in operation.”

On a per-vehicle basis, the story changes again – and more significantly for the auto industry. So step by step. First: The average age of cars and trucks on the road has ticked up to a new record of 11.8 years as of June:

Second, vehicles in operation. New-vehicle sales are languishing at an estimated 16.9 million units in 2019 – where they’d first been in 1999 in a horribly mature market. These vehicles are the new additions to the national fleet. Over the same period, about 11 million vehicles were removed from the fleet, either by being sent to the salvage yard or by being exported to other countries. And the total number of vehicles on the road has risen by the difference, 5.9 million units over the past 12 months, to a record 278.3 million vehicles: 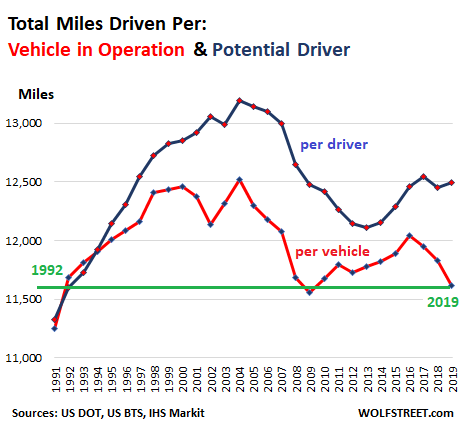 This explains in part why the average age per vehicle keeps ticking up: Yes, quality has been improving, and vehicles last longer; but also, they’re being driven less per year!

Vehicles wear out mostly through usage – by mileage and by driving conditions – rather than by sitting in a garage. If you drive 1,000 miles less per year, over 10 years, there are 10,000 fewer miles on the vehicle, and that may add another six months to a year to the vehicle’s useful life.

And that’s a mega problem for the auto industry. Automakers are engaged in hand-to-hand combat with other automakers, in a highly competitive market, dominated by finicky American consumers who demand top quality, but who drive their vehicles less, and whose vehicles on average continue to get older than ever before. And each new vehicle that rolls off the car carrier onto the dealer’s lot competes with an ever-larger number of often low-mileage used vehicles.

It’s part of Carmageddon, but consumers demand it. Read…  Average Age of Vehicles Sets Record, New-Vehicle Sales Drop to Where They Were 20 Years Ago. What Are Automakers Doing?

87 comments for “Average Miles Driven per Vehicle Drop to 1992 Level: Automakers Not Amused”