Not a rate-cut economy.

The inflation index that the Fed has anointed to be the yardstick for its inflation target – the PCE price index without the volatile food and energy components – rose 0.19% in May from April, according to the Bureau of Economic Analysis this morning. This increase in “core PCE” was near the top of the range since 2010. It followed the 0.25% jump in April, which had been the third largest increase since 2010: 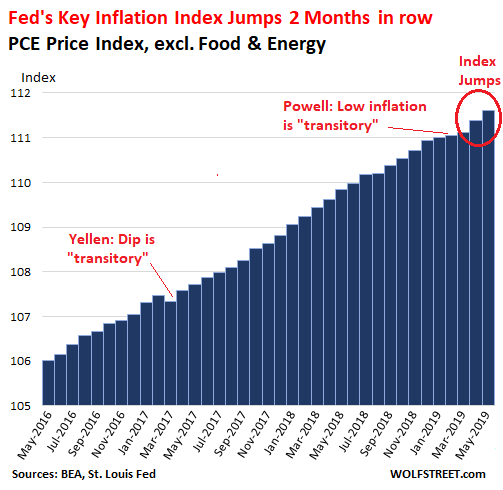 Fed Chair Jerome Powell, at the press conference following the no-rate-hike FOMC meeting last week, gave a clear and succinct summary of the US economy. It was mostly in good shape, he said, in particular where it mattered the most: “All of the underlying fundamentals for the consumer-spending part of the economy, which is 70% of the economy, are quite solid,” he said.

He acknowledged that there were some problems, including the slowdown in manufacturing and the current bust in the vast US oil-and-gas sector, and that the Fed would be watching for further deterioration in the economy, before it would take action. But “low” inflation was another matter.

Sustained “low” consumer-price inflation – as the Fed defines it – worries the Fed, though it’s a godsent for consumers. If inflation, as measured by the core PCE price index, drops in a sustained manner below the Fed’s pain threshold, wherever that may be, the Fed would likely adjust monetary policy no matter what the economy does.

The Fed’s “symmetric” target is a 2% annual increase in the core PCE index, meaning the increase can fluctuate some above or below the target without causing the Fed to act.

Core PCE inflation was in the 2%-range for much of last year. But early this year, the increases softened. So in his opening remarks at the press conference, Powell said that “committee participants expressed concerns about the pace of inflation’s return to 2 percent.”

So that everyone understood, he added: “We are firmly committed to our symmetric 2 percent inflation objective, and we are well aware that inflation weakness that persists even in a healthy economy could precipitate a difficult-to-arrest downward drift in longer-run inflation expectations.”

In other words, a trigger for a rate cut would be a “sustained” period significantly below the 2% target. Inflation data is volatile and jumps up and down. Earlier this year, when core PCE inflation fell significantly below 2%, Powell said that the factors behind this low inflation were “transitory.”

Janet Yellen, when she was still Fed Chair, also used “transitory” to describe the factors that in early and mid-2017 were causing an actual dip in core PCE – which hasn’t happened this year. And a few months later, she was proven right.

After today’s data on the increase in the core PCE index, following the jump in April, the three-month increase – March, April, and May – has now hit 0.50%. Annualized, this amounts to 2.0% core PCE inflation over the past three months, in the bull’s eye of the Fed’s symmetrical target, with the last two months being substantially above the Fed’s target. But note the sharp decline in January, February, and March, and how it has now reversed: 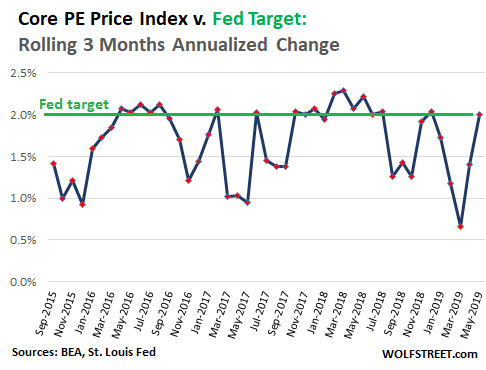 This data is volatile, and is likely to move in either direction. But the “low inflation” scare early this year seems to have dissipated. And this gives the Fed one more reason to be “patient” and observe developments as they unfold before making a move with monetary policy at its meeting at the end of July.

What we’re watching here are the “cyclical” dynamics of inflation, which move on a monthly and yearly basis.

But there are also “structural” factors why inflation has been “low,” by central-bank definitions, for years. Powell mentioned this in the press conference. These factors, in place for over two decades, have to do with the internet, globalization, the search for cheap labor, efficiencies in manufacturing and transportation, and the like.

These factors have led to a sharp split in inflation: Services such as healthcare, rent, and financial services have experienced red-hot inflation; and consumer goods have experienced ice-cold inflation. Here is the data, and what my couch, jeans, car, PC, sheets, and phone are saying about globalization and the internet, and how they impact prices. Read… My Perspective on the Murk of Official Retail-Sales Inflation, with Some Surprising Illustrations

64 comments for “Markets Might Hafta Grapple with “Patient”: Fed Rate Cut in July After This Inflation?”