At first in baby steps, and then in big chunks. Remember the “pivot to QE” mongers at the time? What a hoot.

Practically laughing at the pivot folks, the Bank of England announced today that it sold the entire £19.3 billion in UK government bonds — £12.1 billion of long-dated conventional gilts and £7.2 billion in inflation-protected gilts – that it had purchased between September 28 and October 14 during the UK pension fund crisis that had threatened to send contagion in all directions. And it sold the gilts for £23.1 billion, making a profit of £3.8 billion, or 19.7% in about three months!

The BOE thereby became the first major central bank to actually sell government bonds outright, rather than just patiently letting them mature and run off the balance sheet that way over the years, as other central banks are doing with their QT programs.

What the BOE did was an experiment in how to speed up QT by selling long-dated bonds outright, and it worked just fine. In terms of QT, this is quite a milestone.

The whole story has been kind of a hoot. The BOE had started purchasing those gilts to give leveraged pension funds in the UK some breathing room to deleverage. Those pension funds had for years been using an investment strategy, called liability-driven investment (LDI), which were composed of about £1 trillion in gilts-based derivatives that were apparently designed for perma-ZIRP, and that were blowing up when yields of long-dated gilts rose far faster and far further than their models had anticipated.

The pension funds got margin calls from the same investment banks that had sold them those LDI funds. And when they had to unload their holdings of gilts to prevent or meet those margin calls, thereby becoming forced sellers, the market got frazzled and gilts threatened to go into a “death spiral.”

So the BOE stepped in with a lot of rhetoric about buying huge amounts of gilts, and then ended up only buying puny amounts of them, and then in November, it started selling those bonds that it had bought in September and October, and now it has sold all of them.

“The purchases were made to restore orderly market conditions following dysfunction in the UK gilt market, and in doing so reduce risks from contagion to credit conditions for UK households and businesses,” it said today in the press release.

We talked about this show quite a bit from the beginning to the end, why this wasn’t a pivot to QE in the first place, though the pivot mongers were all over this, spreading the fantasy that this was the first pivot back to QE by a big central bank, and that the Fed would soon follow with its own pivot back to QE. Which hasn’t happened either: Instead, the Fed has unloaded $458 billion so far under its QT program, but by letting maturing bonds roll off the balance sheet without replacement.

What we did learn was the that BOE has successfully demonstrated that selling government bonds outright during QT worked just fine and wasn’t the end of the world, and it has thereby broken a sort of sound barrier of QT.

The green columns reflect the purchases per day of these long-dated gilts during the pension fund crisis; and the red columns represent the sales of those same long-dated gilts.  Note how the pace of the sales started out very gingerly and then picked up pace with each day until the last day when there wasn’t much left over to sell: 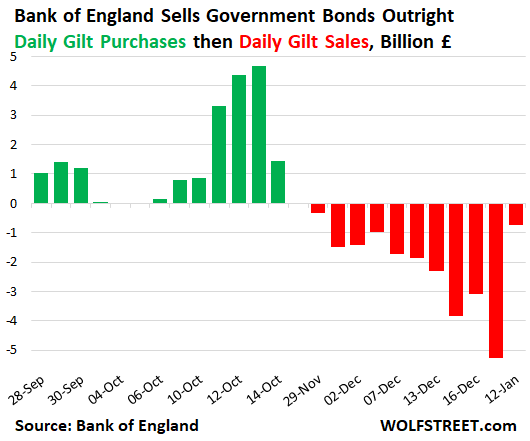 “To ensure the Bank delivered on its commitment that the purchases would be temporary in nature” – and not QE – “the Bank began unwinding these purchases on 29 November,” it repeated for the umpteenth time today.

“The gilts in this portfolio were made available to interested buyers via reverse enquiry windows. This approach helped ensure that the unwind was responsive to market demand and did not trigger renewed dysfunction,” it said. And so the BOE has shown other central banks and the Fed how to sell government bonds outright and into a blistering rally.