Total assets on the Federal Reserve’s balance sheet dropped by $458 billion since the peak in April, to $8.51 trillion, the lowest since October 6, 2021, according to the weekly balance sheet released today, with balances as of January 4.

Compared to a month ago (balance sheet released on December 8), total assets dropped by $75 billion. 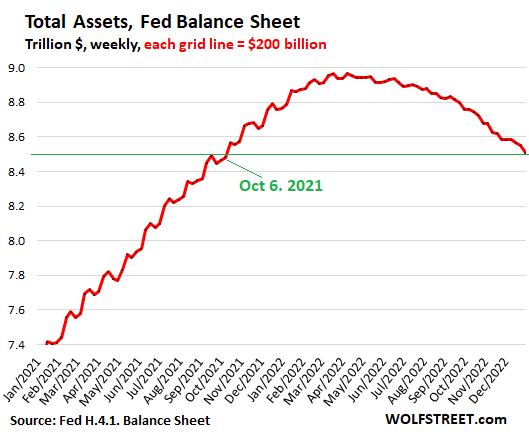 Treasury notes and bonds mature mid-month and at the end of the month, at which point the Fed gets paid face value for them, and they roll off the Fed’s balance sheet.

Since the peak in early June, the Fed’s Treasury holdings fell by $314 billion to $5.48 trillion, the lowest since October 6, 2021. Over the past month, the Fed’s holdings of Treasury securities fell by $57 billion, near the cap of $60 billion.

About half of the $3 billion difference between the cap and the roll-off is due to $1.5 billion of income from inflation protection that is not paid in cash but is added to the principal of Treasury Inflation-Protected Securities (TIPS). 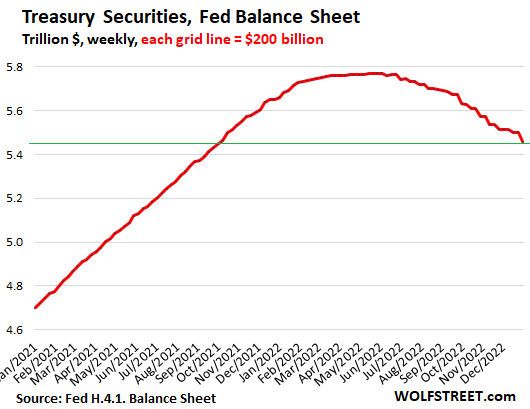 The balance of MBS dropped by $99 billion since the peak, to $2.64 trillion. Over the past month, the balance dropped by $17 billion, below the cap of $35 billion.

The Fed stopped buying MBS entirely in mid-September, after having already cut its purchases to near nothing in the prior months. These inflows are the upward zags in the chart, which ended in September.

There have been some mentions by various Fed governors about the possibility of selling MBS outright to get somewhere near the cap of $35 billion a month – which means that the Fed might have to sell between $10-$20 billion a month in MBS. There was no mention of this in the minutes of the December meeting. So we’ll see if we get more discussions of this cropping up. 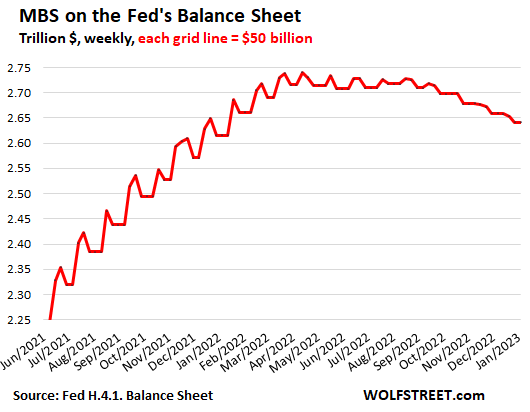 The securities that the Fed bought in the secondary market, at a time when market yields were lower than the coupon interest of the securities, the Fed, like everyone else, had to pay a “premium” over face value. But when the bond matures, the Fed, like everyone else, gets paid face value. In other words, in return for the above-market coupon interest payments, there will be a capital loss in the amount of the premium when the bond matures.

Instead of booking the capital loss when the bond matures, the Fed spreads the write-off over the life of the bond by amortizing the premium in small increments every week. To show the process of this, the Fed accounts for the premiums in a separate account, called “Unamortized Premiums,” which has been steadily declining as the premiums are written off.

Unamortized premiums dropped by $42 billion from the peak in November 2021, to $314 billion: 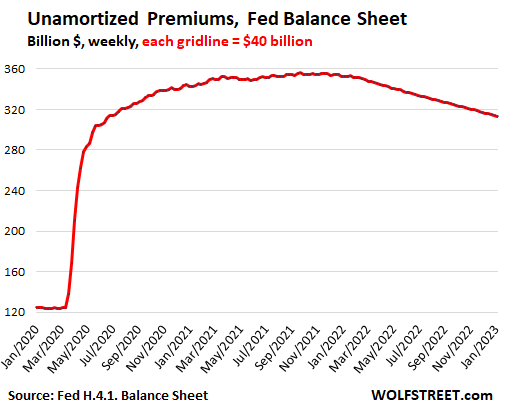 1. Central Bank Liquidity Swaps. The Fed has long had swap lines with a number of other central banks, where the Fed can swap dollars for their local currency, via swaps that mature over a certain time period, such as seven days, at which point the Fed gets its dollars back and the other central bank gets its currency back. There are currently only a minuscule $412 million in swaps outstanding. But you can see why they might be a warning sign: 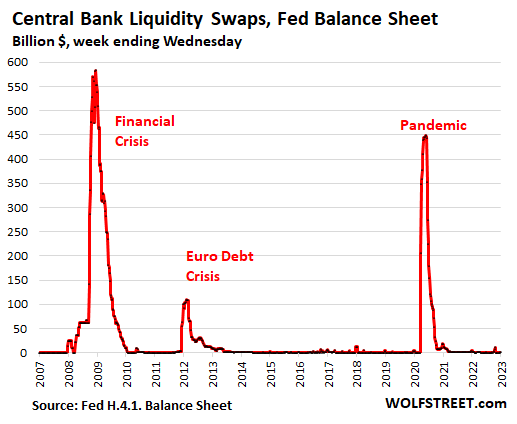 2. “Primary Credit.” The Fed lends money to the banks at the “Discount Window,” for which it charges banks currently 4.5% in interest.

So a few months ago, we started seeing Primary Credit ticking up just a little. Still nothing to worry about. This peaked at $10 billion in late November and has since dropped back to $4 billion. Just keeping an eye on it: 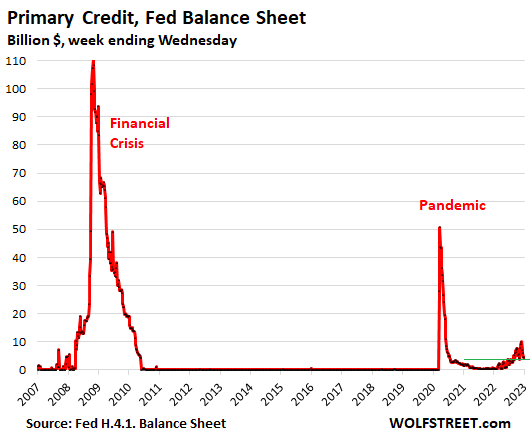 The Fed has revenues from the interest it earns on its $8.5 trillion in securities, and it earns fees from services it provides to the banks. And it has expenses, including the interest it pays the banks on reserves and the interest it pays its counterparties, mostly Treasury money market funds, on overnight Reverse Repos. By raising its rates, the amounts it is paying out in interest started exceeding what it is earning in interest, and it has been racking up losses since September.

The cumulative losses since September reached $20.5 billion on the current balance sheet.

But the Fed is not like any other place. It creates its own money and can never run out of money, and so it can never go bankrupt, and this is just an accounting issue: where do we stick the losses, rather than booking them embarrassingly against capital?

So since September, when the losses started piling up, its Total Capital account has remained unchanged at $41 billion.

Those losses show up instead in the account, “Earnings remittances due to the U.S. Treasury.” I explained all this stuff in detail here.

Meanwhile, here is the Fed’s “Earnings remittances due to the U.S. Treasury” account, showing the cumulative losses since September, which hit $20.5 billion as of the balance sheet today. This is probably the funniest looking account the Fed has on its balance sheet: 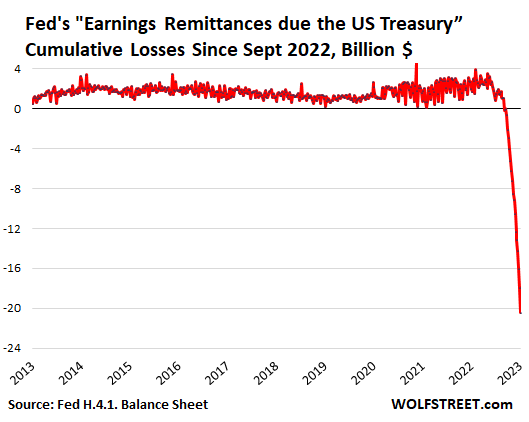 134 comments for “Fed’s Balance Sheet Drops by $458 Billion from Peak: January Update on QT and the Fed’s Losses”