But for Treasury, the gravy train has now ended: Fed released preliminary info on interest income, interest expense, other expenses, profit, and dividends.

The Federal Reserve released unaudited preliminary financial information for 2022 today (audited financial statements will be released in a few months). And we knew what would happen, we discussed this a few times before: In September 2022, the Fed started losing money on a weekly basis. In the four months from September through December 31, the Fed lost $18.8 billion, the Fed reported today.

But its net income for the first eight months of the year amounted to $78 billion, far bigger than the loss of the last four months in the year, and for the year as a whole, it had a net income of $58.4 billion (-46% year-over-year).

In 2022, the Fed hiked all its policy rates by 425 basis points, including the interest rates it pays the banks on their reserve balances  and the interest rate it pays its counterparties of the overnight reverse repurchase operations. And that’s where the losses are coming from.

The problem that has arisen is that the interest it pays on about $5.2 trillion in combined reserves and RRPs started to exceed the interest it receives from its securities that it bought when interest rates were far lower, and which QT has reduced from nearly $9 trillion at the peak in April, to $8.5 trillion now.

The losses don’t matter to the Fed. The Fed creates its own money, and so it cannot become insolvent. And its capital, which is capped by Congress, is not impacted by the losses because the Fed carries the losses as a “deferred asset” on its balance sheet, rather than taking the losses against capital. You can see this on the balance sheet: Since the losses started on a weekly basis, the Fed’s capital has remained unchanged at $41.8 billion.

When the Fed starts making money again in the future – after QT has sufficiently reduced the reserves and RRPs, which reduces interest expenses – its net income will then be taken against that deferred asset until the deferred asset is extinguished.

The losses do matter to the Treasury Department – which is no longer getting the weekly remittances from the Fed.

Every week, the Fed has to remit its estimated income to the Treasury department, and those remittances stopped in September when the Fed started losing money. The remittances won’t get going again until the deferred asset has been fully wiped out by future net income. So it could be years before the Treasury gets any remittances again.

In 2023, given the expected losses and the trend since September, remittances will likely be zero. 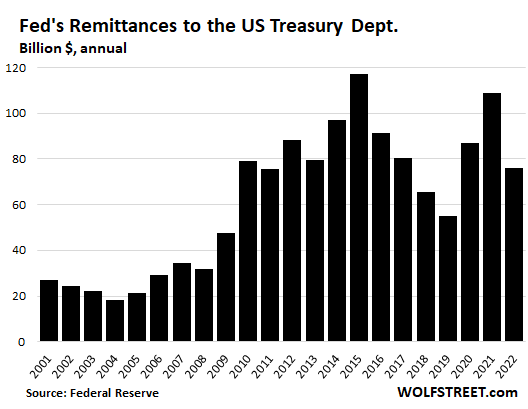 In addition, the Fed made some small amounts – small by Fed standards – including $500 million in fees from services, mostly paid by the banks, and $108 million in net income from its pandemic era emergency programs.

In addition, the Fed had other expenses – bringing its total expenses to $112 billion:

The Fed paid $1.2 billion in statutory dividends in 2022 to the shareholders of the 12 regional Federal Reserve Banks. These 12 FRBs include the New York Fed, the St. Louis Fed, the San Francisco Fed, the Dallas Fed, etc. Their shareholders are the largest financial firms in their districts.

91 comments for “Despite Losses since September, the Fed Still Made a Profit for the Whole Year 2022, Remitted $76 billion to US Treasury Dept.”