Inflation is an enemy of the people, but it’s a friend of government recklessness.

This stuff is now everywhere, propagated by all kinds of newsletters, and by bond fund managers and hedge fund managers that are losing their shirts with these higher interest rates, and the pivot mongers have grabbed a hold of it, and they’re on TV with this stuff, pushing the idea that the Fed must cut interest rates or else the government will go broke or whatever. 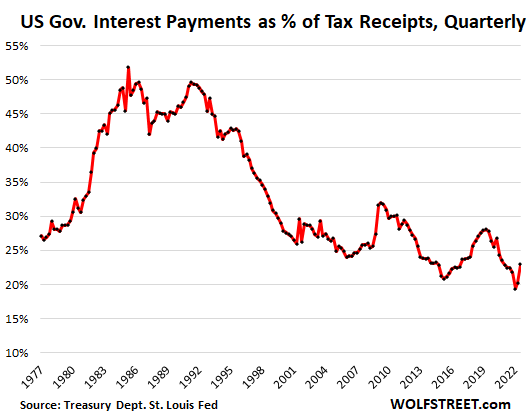 But inflation is an enemy of the people. And when inflation rises beyond certain low-ish levels – the Fed thinks that’s about 2% per its core PCE measure – it will ultimately tangle up the economy, leading to all kinds of long-lasting damage. And that puts the brakes on the government’s wishes to inflate away the results of deficit spending, namely ballooning debts and interest expenses.

This additional $8 trillion in debt, that 34% spike in total debt, quickly added a lot of interest expense for the government.

Fueled by the 34% in additional debt, and now gradually further fueled by the higher interest rates spreading into the overall debt, total interest expense in Q3 spiked by 24% from a year ago and by 43% from two years ago.

And this is the kind of scary chart the pivot mongers are circulating while omitting the huge spike in tax receipts and the historically low burden of this interest expense as a percent of tax receipts that we saw in the chart above: 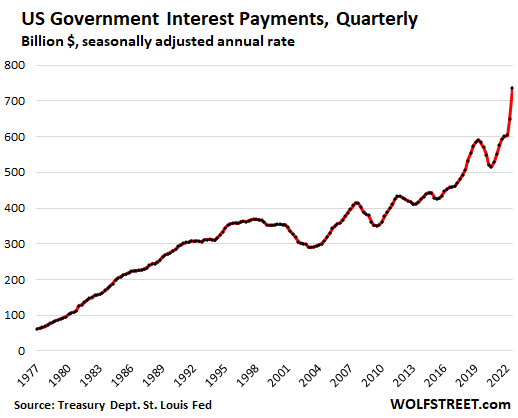 Don’t get me wrong: This amount of deficit spending is nuts, it’s very inflationary and contributed to the spike in inflation we have now. It’s a terrible policy that Congress pursued. And there are a lot of issues with that. But the burden of this interest expense is not one of them – thanks in part to surging inflation.

Tax receipts spiked by 21.5% year-over-year and by 52% from two years ago. This is what pays for the interest expense: 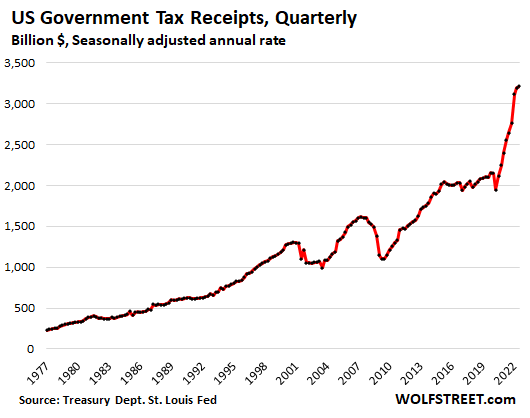 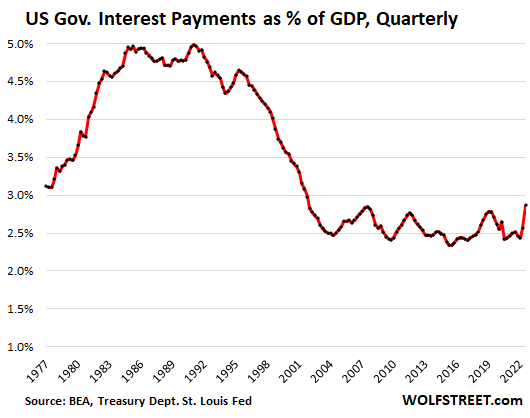 This government love of inflation and deficit spending is precisely why modern central banks are supposed to be “independent” from the government so that they can tamp down on inflation, and let the government struggle with their deficits and debts.

And all this ongoing deficit spending, and the money from the prior stimulus spending that is still sloshing around at state and local governments, at businesses, and at consumers, will provide further fuel for spending, taxes, GDP, and inflation.

The path that government spending has been on for the past three years is clearly wrong-headed. And maybe someday, when interest expense eats up 50% of tax receipts as it did in the 1980s – and not 22.9% as it does today – then just maybe we might see some real discussion and action in Congress about curtailing these ridiculous deficits. But we’re a million miles away from that. And the Fed is doing exactly what it needs to do — hiking interest rates — to curtail inflation and to gently begin nudging Congress to take the deficits a little more seriously.

180 comments for “Can the Government Pay for its Spiking Interest Expenses? Time to Look at Interest Payments against Tax Receipts”