Bank of England Deputy Governor for financial stability Jon Cunliffe, in a letter to UK Parliament on Wednesday, confirmed that the BOE had stepped into the UK government bond market last week to stop a panic that had turned into a self-propagating death spiral, that was threatening to blow up £1 trillion in gilts-based derivatives that pension funds were using to achieve their investment goals.

Panics can be triggered when someone cries “fire” in a crowded theater. In this case, the panic the UK government bond market was triggered by the new government’s ill-conceived series of announcements over a two-week period, culminating with the release of the official plan on Friday September 23, topped off with comments by finance minister Kwasi Kwarteng on Sunday, September 25. They detailed tax cuts for corporations and the wealthy that would have to be funded by large amounts of new debt, just when interest rates were already rising in response to inflation that had hit 10% and had become the number one economic problem that would have to be delt with by pushing up interest rates further.

The bond market rebelled against the new government’s debt-doesn’t-matter policies in this environment by selling bonds and driving up yields. And suddenly debt mattered.

And the whole thing took on a life of its own. The plunging prices of long-dated gilts – their yields spiked – caused investment banks to send out margin calls to defined-benefit pension funds that had used £1 trillion in “liability driven investment” (LDI) funds. These are derivatives based on long-dated gilts. The pension funds then had to sell gilts into the already panicky market, to meet those margin calls, which caused gilt prices to fall further, which caused further margin calls, etc., hence the death spiral.

Cunliffe, in a letter sent to Treasury Select Committee chairman Mel Stride, told UK Parliament that the BOE had first fielded concerns on Friday, September 23, when the mini-budget with the tax-cut announcement was released, and when yields spiked violently.

On the evening of September 27, after the 30-year gilt yield spiked by 67 basis points during the day, following the spikes of prior days, LDIs warned the BOE that the funds might fail, Cunliffe said.

“Measured over a four day period, the increase in 30 year gilt yields was more than twice as large as the largest move since 2000, which occurred during the ‘dash for cash’ in 2020,” he said.

“It was more than three times larger than any other historical move. Gilt market functioning was severely stretched, particularly at the long end of the curve,” he said.

“The Bank was informed by a number of LDI fund managers that, at the prevailing yields, multiple LDI funds were likely to fall into negative net asset value. As a result, it was likely that these funds would have to begin the process of winding up the following morning,” Cunliffe wrote.

“In that eventuality, a large quantity of gilts, held as collateral by banks that had lent to these LDI funds, was likely to be sold on the market, driving a potentially self-reinforcing spiral and threatening severe disruption of core funding markets and consequent widespread financial instability,” he wrote, reported by MarketWatch.

BOE staff worked during the night on Tuesday, September 27, to design an intervention by the BOE that would avert the crisis, in “close communication” with the U.K. Treasury.

Following the announcement of the BOE intervention plans on Wednesday, September 28, at 11 am local time, the 30-year gilt yield plunged by over 100 basis points.

“This would have resulted in even more severely disrupted core gilt market functioning, which in turn may have led to an excessive and sudden tightening of financing conditions for the real economy,” said Cunliffe.

The risks of leverage from LDI funds had been considered by the BOE before the panic, he said, but the repricing ahead of the BOE’s intervention “far exceeded historical moves.” If gilt yields had risen more slowly, pension funds could have unwound their portfolios in an orderly fashion, without triggering the death spiral.

So the panic has settled down. This wasn’t a “pivot” to QE, but a brief intervention to halt a death spiral, and it did that effectively.

The BOE plans to end the program on October 14, as initially announced. The BOE has purchased only £3.66 billion in bonds since the program started last Wednesday, with only £22 million purchased on Monday, zero on Tuesday and Wednesday, and £154 million today, after it purchased only £1.2 billion per day on average last week – far below the up to £5 billion per day amount that the BOE had initially announced. And the BOE is still planning to start QT by selling gilts on October 31. So far, this was a highly effective way to stem a panic that had taken on a life of its own, without actually buying much: 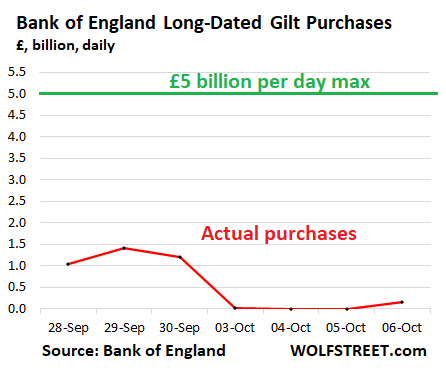 73 comments for “Bank of England Explains Why Intervention Wasn’t Pivot to QE, But Effective Effort to Halt Death Spiral Triggered by Tax-Cut Panic in Gilt Market: Bond Purchases Near Zero this Week”