In the week ended September 30, demand for mortgages to purchase a home plunged by 13%, seasonally adjusted, from the already beaten-down levels in the prior week, according to the Mortgage Bankers Association today. Compared to the same week last year, purchase mortgage applications dropped by 37%. They fell through the lows during the lockdowns and hit the lowest level since October 2015! Purchase mortgage applications are an indication of housing demand over the next few weeks.

The weekly drop was in part caused by Hurricane Ian, and in part by the spike in mortgage rates into the 7% range: 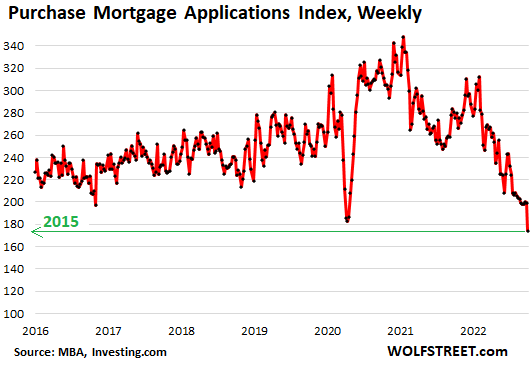 Applications for mortgages to refinance an existing mortgage plunged by 18% compared to the prior week, seasonally adjusted, and by 86% from a year ago, to the lowest level since January 2000. No homeowners in their right minds are going to refinance an old 3% or 4% mortgage with a new 7% mortgage, except to extract emergency cash, which will cost them dearly, and they might be able to accomplish the same for a lot less with a HELOC. So the HELOC business, which has totally died down since the Financial Crisis, should perk up again.

The mortgage refi business is crucial for the mortgage lenders. The largest mortgage lenders in the US – Rocket Companies, which owns Quicken Loans, United Wholesale Mortgage, which owns United Shore Financial, and LoanDepot, all have cut staff by thousands of people each, and their stocks have crashed. The entire industry is trimming back to survive. Some mortgage lenders already filed for bankruptcy. Others have shut down (read: Mortgage Lender Woes) 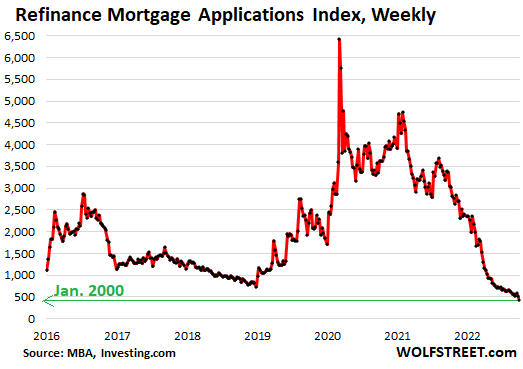 The daily measure of the average 30-year-fixed mortgage rate by Mortgage News Daily hit 7.08% on Tuesday last week. It then dropped back, and today jumped again, hitting 6.95%.

Freddie Mac’s weekly measure, released today, based on mortgage rates early this week, jumped by 41 basis points from the prior week, to 6.7%, the highest since 2007 (red line in the chart below). A year ago, it was 3.0%.

The average 15-year mortgage – if you can handle the payment at the current prices – spiked by 52 basis points from the prior week to 5.96% (green line), the highest since October 2008, according to Freddie Mac data. 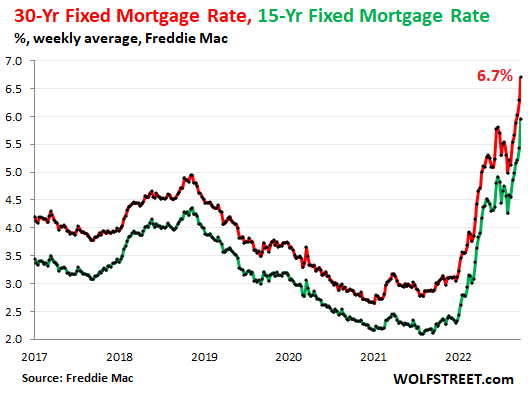 The spread blows out.

The 30-year fixed mortgage rate runs roughly in parallel with the 10-year Treasury yield, but higher. This makes sense because most mortgages get paid off much sooner than in 30- years, as people refinance the mortgage or sell the home. The average lifespan of a 30-year mortgage is less than 10 years, according to Rocket Mortgage.

The difference between the 30-year fixed mortgage rate and the 10-year Treasury – the “spread” – at today’s mortgage rate per Freddie Mac, has widened to 2.92 percentage points, matching the multi-year high on December 31, 2008, during the Financial Crisis, just one week. To get to a wider spread, we have to go back to 1986. 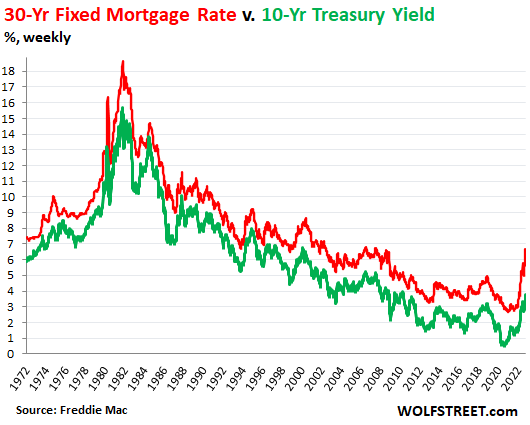 The chart below shows the spread (the difference) between the 10-year Treasury yield and the 30-year fixed mortgage rate. The spread tends to widen or narrow drastically when yields are in upheaval, when one rate moves a lot faster than the other – with some interesting implications: 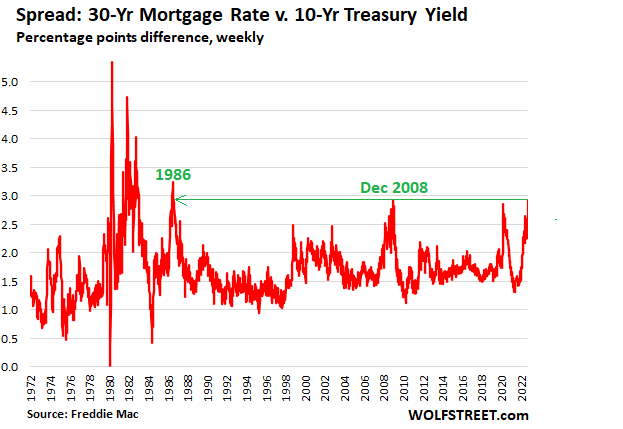 The spread will normalize as the 10-year yield catches up.

The spread has widened this year because the 10-year Treasury yield has been slow in moving higher. It always reacts much more slowly to changes in monetary policies than short-term yields. The one-year yield has spiked by nearly 400 basis points since late last year, as the Fed embarked on its rate-hike cycle. But the 10-year yield has come up only about 200 basis points over the same period. And the yield curve inverted over the same period, with short-term yields higher than long-term yields.

So the mortgage market has taken its cues of where rates are going from short-term yields, while the 10-year yield was dilly-dallying around.

But the Fed’s QT has now kicked in at full pace, and this will allow the 10-year yield to drift higher. As the 10-year yield comes up faster than mortgage rates, and makes up lost ground, as QT continues, and as the Fed pauses its rate hikes next year in the 4% to 5% range to watch what happens with inflation, the spread will narrow back into the normal-ish range of about 1.5 to 2 percentage points to – just a guess – a 7.5% mortgage rate and a 5.8% 10-year yield?

138 comments for “Housing Bubble Woes: Mortgage Demand Plunges, Rates Near 7%, Spread Between Mortgage Rate & 10-Year Treasury Yield Blows Out Most since Dec. 2008 and 1986”