Over the past few days, the pound plunged, including with a flash-crash on Monday that briefly took it to record lows against the US dollar. Prices of long-dated bonds went into a death spiral, with the 10-year yield spiking by 130 basis points in four trading days to 4.63% early today, and by 275 basis points in seven weeks ago (up from 1.88% in early August).

The bond market reaction represents a colossal and sudden degree of “tightening” of the financial conditions, before the Bank of England’s QT had even started. QT is designed to bring up long-term yields, but they already exploded due to chaos.

It was the market’s backlash against the new government’s reckless plan to cut taxes for the rich and for corporations, funded by new debt, while piling on spending to subsidize energy costs, also funded by new debt, thereby requiring the issuance of large amounts of new debt, even as inflation has already reached to 10%.

The Bank of England, which is in charge of maintaining financial stability, now has a slew of problems to deal with: inflation spiraling out of control, currency plunging, bond market in chaos, financial stability at risk, and spreading contagion. And some of them require the response that the others require. So this is a mess, and there are no good solutions.

The BoE chose to maintain financial stability first because the bond market chaos was starting to blow up the financial system, as leveraged pension funds were getting collateral calls triggered by the spike in yields, and as UK lenders had suspended making mortgage offers because no one knew how to price them amid this chaotic volatility in bond yields.

Worried about “contagion” and “financial stability”

So the BoE came out today and said that it would purchase long-dated gilts with remaining maturities of over 20 years. The purchases would go through October 14.

“The purchases will be unwound in a smooth and orderly fashion once risks to market functioning are judged to have subsided,” it said.

And the 10-year yield plunged by around 60 basis points, to 4.01% at the moment, undoing the spike early today and yesterday: 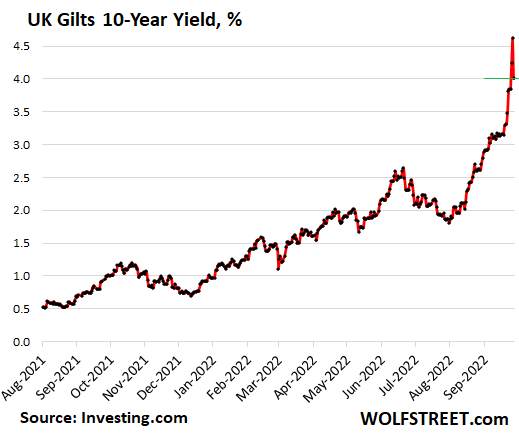 “This repricing has become more significant in the past day – and it is particularly affecting long-dated UK government debt,” it said.

“Were dysfunction in this market to continue or worsen, there would be a material risk to UK financial stability,” it said.

“This would lead to an unwarranted tightening of financing conditions and a reduction of the flow of credit to the real economy,” it said.

“In line with its financial stability objective, the Bank of England stands ready to restore market functioning and reduce any risks from contagion to credit conditions for UK households and businesses,” it said.

“To achieve this, the Bank will carry out temporary purchases of long-dated UK government bonds from 28 September,” it said.

“These purchases will be strictly time limited. They are intended to tackle a specific problem in the long-dated government bond market,” it said.

“Auctions will take place from today until 14 October. The purchases will be unwound in a smooth and orderly fashion once risks to market functioning are judged to have subsided,” it said.

Defined-benefit pension plans in the UK that were using an investment strategy, called liability-driven investment (LDI), got hit by collateral calls as long-dated gilts went into the death spiral.

“The amount of liabilities held by UK pension funds that have been hedged with LDI strategies has tripled in size to £1.5 trillion in the 10 years through 2020,” according to Bloomberg.

BlackRock, Legal & General Group Plc, and Schroders Plc manage LDI funds on behalf of pension clients. “The pension firms use them to match their liabilities with their assets, often using derivatives,” according to Bloomberg.

I mean, surely this strategy is very conservative and is not risky at all and is very suitable for £1.5 trillion in pension funds. Until it suddenly blows up.

The massive spike in yields of long-dated gilts “blew through the models and the collateral buffers,” Bhagwan told Bloomberg. LDI funds got margin calls from their investment banks and had to post more collateral.

And that’s precisely how contagions spreads: by having to sell unrelated assets in order to meet margin calls.

“The BOE had been warned by investment banks and fund managers in recent days that the collateral requirements could trigger a gilt crash, according to a person familiar with the BOE’s deliberations before they stepped in,” according to Bloomberg.

“The BOE intervention was required to prevent a vicious cycle becoming even more dangerous for pension funds forced to sell their gilt exposures,” Calum Mackenzie, an investment partner at Aon, told Bloomberg.

“The market’s swift and significant reaction underlined the big risk faced by pension funds who have had or who could have had their liability hedges reduced,” Mackenzie said.

“Any pension funds which has used even moderate levels of leverage are struggling to keep pace with the moves,” Mackenzie told Bloomberg before the BoE stepped in. “You have a bit of a death spiral potentially where pension funds in particular are being forced to sell because they’re breaching their leverage agreements with their LDI counterparties.”

“We are monitoring the situation in the financial markets closely to assess the impact on defined benefit pension scheme funding.”

“We again call on trustees of DB schemes and their advisers to continue to review the resilience and liquidity of their investments, risk management and funding arrangements, and plan accordingly to protect the interest of scheme members.”