This is what runaway inflation that kicked off in mid-2021, and was called “temporary” by the ECB at the time, looks like 14 months into it, as inflationary pressures are shifting from energy to other items and to services.

Inflation in the Eurozone jumped to 10.0% in September from 9.1% in August, a new record in the Eurozone data going back to 1997, according to preliminary data released today by Eurostat.

In Germany, where some of the government’s inflation subsidies expired, inflation spiked to 10.9% from 8.8% in August. Nine of the 19 Eurozone countries had inflation of 10% or more, including the three Baltic countries, at over 22%. 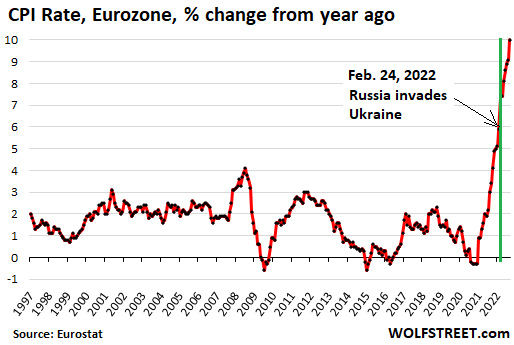 The fact that inflation began spiking in mid-2021, shooting past the ECB’s target of 2% in July 2021, and hitting 3% in August 2021, while the ECB called it “temporary,” shows that the same dynamics were at play as in the US: The inflation dam had broken, and suddenly inflation was washing over the land, and all inflation-heck was breaking loose.

Then came the spike in costs of energy products and some other raw materials in 2022, making the already burning inflation scenario a whole lot worse.

Energy costs are still the big driver (+40.8%), but price spikes have spread across the economy to other goods, and even to services. Services inflation jumped to 4.3% in September, up from 3.8% in August.

The CPI without energy spiked to 6.4% in the Eurozone, from 5.8% in the prior month. This measure hit the 2% mark in October last year and has spiked relentlessly since then: 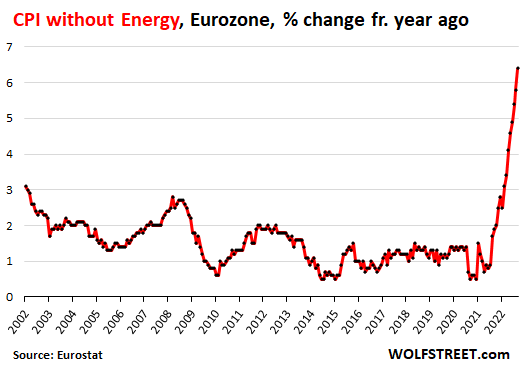 Across the Eurozone, governments applied various strategies to push down the inflation rate, such as capping fuel prices, cutting fuel taxes, subsidizing fares for public transportation, etc., all of which kept the CPI lower. But some of those subsidies have expired, including in Germany.

In Germany, CPI already hit 6.0% in November 2021, well before Russia invaded Ukraine. By June 2022, the government cut fuel taxes and offered a public transportation subsidy in from of a €9-per-month transportation pass that allowed people unlimited travel on rail systems, buses, and trams across the country. This program, which contributed to a dip in CPI in June and July, ended in August. And in September, CPI inflation spiked to 10.9%. 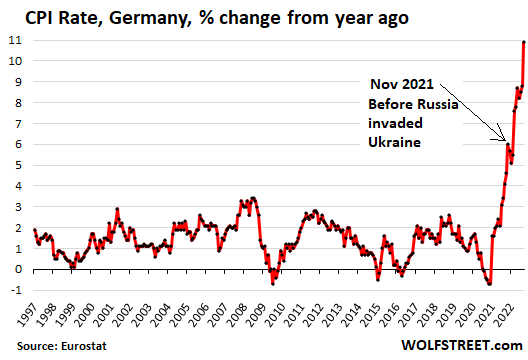 Russia’s invasion of Ukraine and the West efforts to halt Russia’s territorial ambitions in Europe caused energy prices to spike further. Russia’s invasion of Ukraine also tore directly into supply chains that ran through or originated in Ukraine, hitting Ukraine’s exports of iron, steel, cereals, animal feeds, electrical equipment, automotive components, etc., which triggered a series of shortages among European manufacturers, including automakers that were getting their wiring harnesses from manufacturers in Ukraine. All this contributed to price increases in Europe. 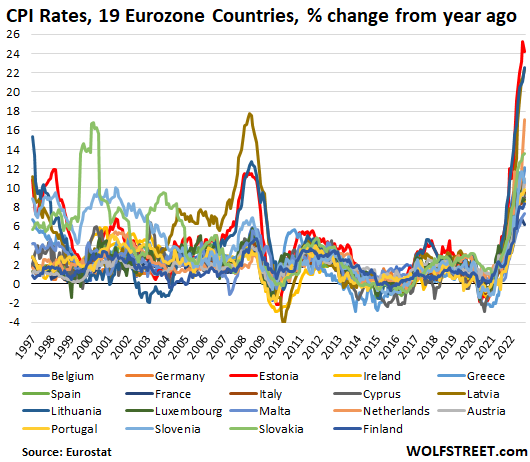 The ECB ended QE in June when its balance sheet topped out at €8.84 trillion in total assets. On September 8, it hiked its policy rates for the second time, this one by 75 basis points, bringing its deposit rate to +0.75%, which finally ended the era of Zero Interest Rate Policy (ZIRP), after its July rate hike had ended the crazy era of Negative Interest Rate Policy (NIRP). The absurdity now is that inflation is at 10% while the ECB’s main policy rate is at a ridiculous 0.75%: 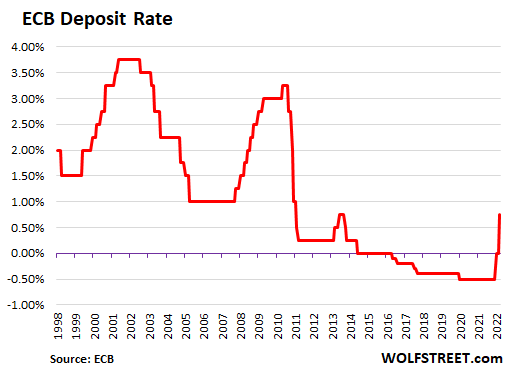