Just briefly here: The Fed uses the “core PCE” inflation index, released by the Bureau of Economic Analysis, as yardstick for its inflation target. This “core PCE” index – the overall PCE inflation index minus the volatile food and energy components – is therefore crucial in the current rate-hike scenario, amid red-hot inflation, when everyone wants to know when inflation is finally going to cry uncle.

Some folks thought that happened in July, when the month-to-month “core PCE” inflation slowed to “0%” (rounded down).

Turns out this much-ballyhooed month-to-month “core PCE” reading in July of “0%” was just a one-off event. In August, according to the BEA today, the core-PCE inflation index jumped by 0.6%, same as the multi-decade records in June 2022 and in April 2021 (all rounded to 0.6%). As Powell had said during the FOMC press conference: Underlying inflation is just not slowing down. 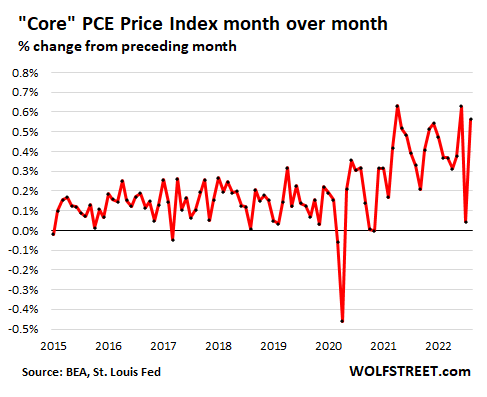 This “core PCE” is the lowest lowball inflation index the US government provides. But it is crucial in figuring out where the Fed’s monetary policy might go, and how far the Fed might go with its rate hikes, and when it might pause.

This year-over-year measure is what the Fed uses for its 2% inflation target. But given the huge volatility in inflation last year, Powell said that they would be looking at month-to-month developments to get a feel of where inflation might be headed. They’re looking for “compelling” evidence that inflation is headed back to the 2% target. 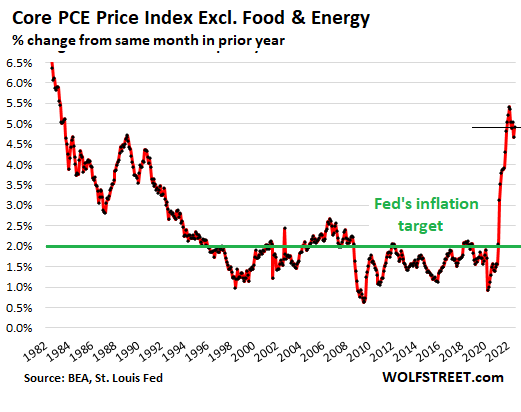 Since about April 2021, I said that the Fed would need to bring its short-term policy rates to 4%, combined with sufficient QT, to bring inflation under control, and then pause to watch it take effect. I said that this would be enough to tamp down on what was then already soaring but still much less inflation. That was my story, and I stuck to it until a few months ago. Now it looks like the Fed will take those rates above 4% by yearend, and higher still next year.