The prices of natural gas futures in Europe, after increasing 20-fold since March 2021, have plunged amid falling demand, above-target gas-storage increases, a growing list of floating LNG import terminals, and surging imports of LNG from the US and other parts of the world.

The front-month October TTF contract in the Netherlands – a benchmark for northwest Europe – plunged by 8% on Monday from Friday, and by 44% from the peak on August 26, to €191.02 per megawatt-hour (MWh) at the close today (data via Investing.com). 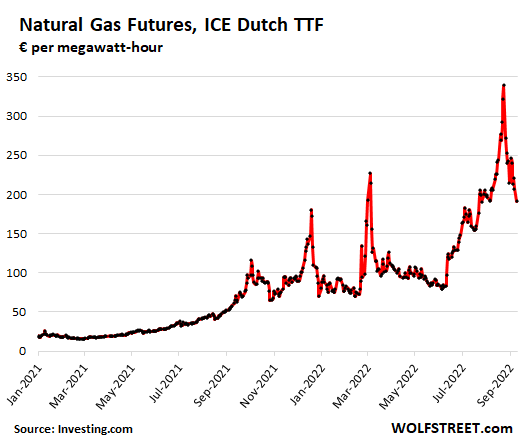 The spike in futures prices was driven by speculation following Russia’s threats to cut, and then by its actual cuts, of gas deliveries to Europe. But those sky-high prices caused large shifts, not only lowering demand but also lining up new supply. And with this type of huge spike, and then plunge, there may well be some big energy speculators and assorted hedge funds that ended up on the wrong side with massively leveraged positions.

Efforts to ramp up supply via LNG imports.

On Thursday, two floating liquefied natural gas (LNG) import and storage terminals entered operations in the port of Eemshaven in the Netherlands, when they received their commissioning shipment of LNG from the US. The EemsEnergyTerminal, as the two vessels are called, will receive its first commercial shipment this week.

These floating storage and regasification units (FSRU) receive the LNG, store it, re-gasify it, and then send the natural gas via pipeline into the land-based distribution network in the Netherlands, from where it can also be distributed to other countries.

The capacity of an FSRU is much smaller than that of a large land-based import terminal, but it’s a start. The terminal at Eemshaven is expected to receive about 18 LNG cargoes by December 31, according to Bloomberg.

Germany, which had become recklessly dependent on cheap natural gas from Russia and had failed to build a single LNG import terminal as alternative, is now getting the drift. It takes years to build a large LNG import terminal, so that won’t resolve today’s crisis. But the German government has chartered five FSRUs, three of which will start operating this winter. Private entities will charter an additional two FSRUs.

Germany has embarked on drastic efforts to cut natural gas consumption by 20%, which includes just about anything, from asking people to forgo showers altogether, or take cold showers, to closing indoor heated pools, to production cuts by industrial users. Europe overall is aiming for a 15% cut in natural gas consumption.

In Germany, gas storage facilities have been filling at record pace and are 87.9% full, according to data from Gas Infrastructure Europe. For the EU overall, storage facilities are 83.6% full, well above the 80% target set out by the European Union.

Analysts have cited various reasons for the plunge in futures prices, including the success over the past 10 days of the counteroffensive by the Ukrainian military, which has already liberated significant parts of Ukraine from Russian occupation. In terms of natural gas, the hope may be that this war will soon be over, with Russia kicked out of Ukraine, and that the energy relationship between Russia and Europe could then be normalized again.

But I doubt that Germany will just return to the old normal. Germany’s vulnerability due to its natural gas dependence on Russia, which dates back to the Cold War, has shaken up the country. Germany has figured this out finally, and it has finally embarked on diversifying its natural gas supplies by building LNG import terminals.

However this turns out, the consequence will be that Germany’s consumers and industrial users will face natural gas prices that are much higher than they were two years ago, as high-cost LNG will be forming a much larger part of the mix, and low-cost pipeline natural gas from Russia a much smaller part of the mix.

As a side note: Russia cannot sell at all the natural gas that it didn’t sell to Europe because the pipeline system cannot be moved overnight, and there are no LNG export facilities linked to the production sites. So Russia has to cut production at these sites, and it loses the revenues from that production.