Austin-based Bitcoin miner and crypto-hosting-platform Core Scientific – one of the largest publicly traded crypto miners with data centers in several states, including Texas – filed for chapter 11 bankruptcy on December 21, just about exactly 11 months after going public via merger with a SPAC on January 20, 2022.

The day the merger with the SPAC was completed on January 20, the stock had a market cap of $2.8 billion, already down sharply from the peak of $4.5 billion after the announcement of the merger but before the completion of the merger. Today, forget it. Shares are at a few cents (data via YCharts): 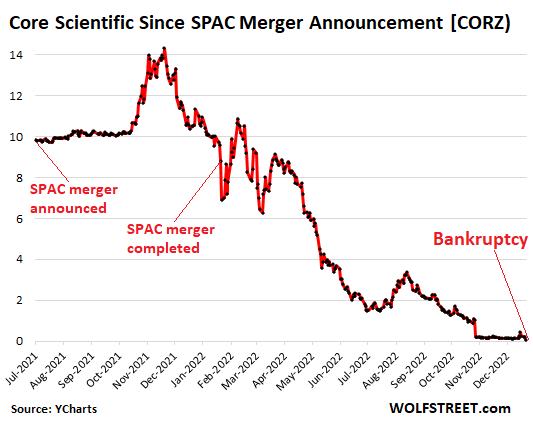 Don’t worry, no one is going to jail here. Regulators slept through all this. This is just another act in the superb hype-and-hoopla show that is drawing to a close. A restructuring deal with a group of creditors representing “over 66%” of $550 million in secured convertible notes has been agreed on. Stockholders have already kissed their money goodbye because they eagerly believed what they were told at the time they bought this stuff, eagerly participating in what I call consensual hallucination.

There are no victims here, just investors who lost money because they eagerly participated in consensual hallucination. Money-printing and interest rate repression by the Fed has turned investors’  brains to mush. That’s how it goes.

In the bankruptcy filing today, the company blamed:

The company has been a great bankruptcy candidate because it has over $1 billion in debt in addition to other liabilities.

It defaulted on $275 million in equipment financing. It failed to pay construction contractors for $70 million in invoices whereupon they asserted mechanic’s liens. It’s entangled in litigation with a former executive. And then, the stiffed equipment lenders accelerated the debt they were owed which triggered a “cross default” on the $550 million in secured convertible notes.

Before the bankruptcy filing, the company worked out a deal with a group of creditors representing “over 66%” of the secured convertible notes that it defaulted on. This group – this is the playground of distressed debt investors that buy such debt for cents on the dollar – agreed to provide a Debtor-in-Possession (DIP) loan of about $57 million as part of the bankruptcy to fund the company during the bankruptcy proceeding, and it agreed to support another DIP loan of $18 million.

The secured convertible noteholders will then end up with 97% of the equity of the restructured company when it emerges from bankruptcy, according to their proposal. The existing stockholders might get some crumbs and warrants, if anything. If the proposal makes it through the proceedings, it will reduce the company’s debt by hundreds of millions of dollars and would lower its interest expenses.

But reducing the interest expense isn’t going to help all that much: In Q3, when it lost $435 million, only $25 million were interest expense. So maybe the secured noteholders will try to sell those new shares quickly to the public before the company sinks into bankruptcy for a second time?