“The Company anticipates that existing cash resources will be depleted by the end of 2022 or sooner,” it said. And that would be the end.

The fundamental rule in crypto-land is that every company is tightly connected by innumerable tentacles to lots of other crypto companies – borrowing from and lending to each other – which makes for smooth and efficient contagion within crypto-land. They all went to heaven together, and now they’re all going to heck together.

The company, which is based in Austin, TX, blamed the threat of the bankruptcy filing on “the prolonged decrease in the price of bitcoin” – in Q3, “the average price of bitcoin declined to $21,324, compared to $32,502 for the three months ended June 30,” it said. Alas, those were the Good Times. The price of bitcoin has meanwhile plunged to $16,000.

It also blamed “the increase in electricity costs.” It needs electricity in massive quantities to power its crypto mining rigs and data centers, and electricity is therefore one of its major input costs.

And it blamed its “ability to meet its liquidity needs,” or rather lack of ability, and while at it, it blamed its debt covenants that it cannot comply with.

Its reserves were down to $32 million in cash and just 62 Bitcoin as of October (about $1 million in fiat), down from over 8,000 Bitcoin earlier in 2022. It had sold those Bitcoin holdings to stay afloat as Bitcoin was plunging. At the same time, electricity prices soared. And because its stock price imploded, it couldn’t raise cash by selling more stock.

Given its huge cash burn, that $33 million will be used up before year-end. That’s the message here.

This is a lot to swallow for investors that had bought the hype and hoopla of a company that went public less than a year ago.

Its shares [CORZ] have collapsed by 99% from the peak a year ago, after the SPAC merger was announced but before it was completed, to sheer nothingness ($0.13) today, another one of hundreds of astounding displays of how insidious the Wall Street hype-and-hoopla show had become in 2021 to dump something like this into the lap of the public. But nothing special in my huge and growing pantheon of Imploded Stocks: 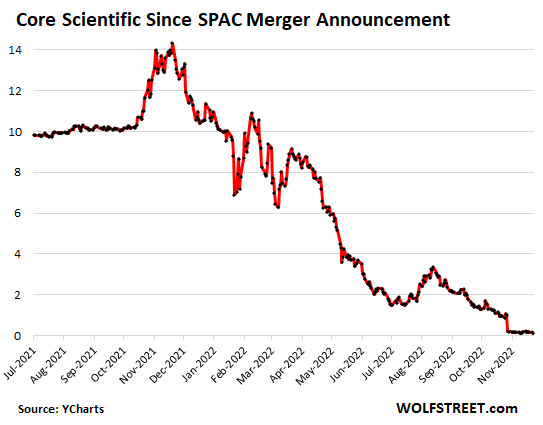 Another US-based crypto-miner data-center provider, privately-held Compute North, already filed for bankruptcy in September, owing as much as $500 million to at least 200 creditors.

Core Scientific has $1.3 billion in liabilities, including nearly $1 billion in notes that were coming due. The company had already said it won’t make debt payments due in late October early November – and didn’t make them. It’s trying to negotiated with its creditors.

This is some extra-special but ultra-common stuff of the insidious hype-and-hoopla show on Wall Street – people who believed this crap participated in what I call consensual hallucination.

This is what the announcement said in July 2021 with a perfectly straight face:

“The Transaction positions Core Scientific to mine for digital assets and provide and develop hosting and other blockchain services at scale, using low cost, clean and renewable energy for a growing, global decentralized finance industry.

If you read this back then and believed it, and wanted to invest in this outfit, it’s a sign you were engaged in consensual hallucination.

The whole kit and caboodle is now blowing up. As soon as the price of bitcoin started dropping, the hype-and-hoopla show collapsed, the shares imploded, the company defaulted on its debts, and it’s getting ready for a bankruptcy filing.

People should be going to jail for this but won’t. And the SEC won’t do anything either because it has been asleep for years. We have already counted over 1000 companies whose shares have imploded by 80%+ from their recent highs – not just in crypto-land but everywhere. And this won’t be over until all that stuff is gone.