One heck of an earnings season for tech and social media companies so far.

It got started with Snap last week, then Meta made a huge mess afterhours on Wednesday and during regular trading on Thursday, after its fiasco of an earnings report caused its shares to plunge by 24%. And Thursday afterhours we got Amazon, Intel, and Apple.

Amazon shares plunged 20% in afterhours trading on Thursday, moments after releasing its earnings report for Q3 and its projections for the holiday shopping quarter. At the moment, shares are down 14%, after having already dropped 4.1% during regular trading. Now at $96.84, the stock [AMZN] has plunged by 48% from its high in July 2021 and is back where it had first been in September 2018 (data via YCharts): 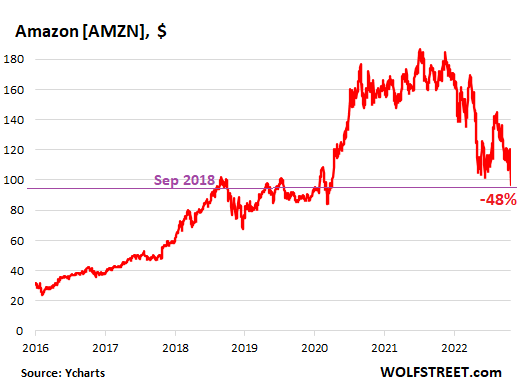 But operating expenses jumped by 17.6%. Operating income plunged by 48%. Net income was only $2.87 billion – despite the operating profit at AWS of $5.4 billion, so losing money hand over fist in its retail division. On a per-share bases, net income fell to $0.28, from $0.31 a year earlier.

That was bad, but the killer was the forecast.

Amazon said that revenues in Q4 would rise 2% to 8%. Even the high figure would be the slowest holiday-quarter growth in its history. It expects Q4 revenues of $140 to $148 billion, when analysts expected $156 billion. Amazon expects an operating income between $0 and $4.0 billion, compared with $3.5 billion a year ago.

Amazon is “optimistic about the holiday, but we’re realistic that various forces are weighing on people’s wallets,” CFO Brian Olsavsky told journalists during a call after the report.

“We’re taking actions to tighten our belt,” he said. So Amazon would pause hiring in some divisions and wind down some products and services.

Intel reported a fiasco. Mass-layoffs perked up the stock.

Intel reported a 20% plunge in revenues, including a 27% plunge at its data-center division and a 17% plunge in its PC division. It reported a 13.4-percentage-point plunge in profit margin, a restructuring charge, and a loss before taxes. Had it not been for a $1.2 billion “tax benefit,” Intel would have had a net loss.

What saved the evening for Intel’s stock was the announcement that it would cut costs by $3 billion in 2023, “growing to $8 billion to $10 billion in annualized cost reductions and efficiency gains by the end of 2025,” as it said. Everyone knows what those kinds of cost-cuts mean: mass-layoffs.

Sure enough, CFO David Zinsner said in a phone interview with Barron’s that there would be a “meaningful number” of layoffs, thereby confirming a Bloomberg report earlier this month of big layoffs that would reach 20% of the staff in some divisions, such as sales and marketing.

“The worsening macro was the story and is the story,” CEO Pat Gelsinger told Bloomberg in an interview. “There’s no good economic news,” he said, and predicting a bottom for the semiconductor market would be “too presumptive.”

Incidentally, Intel is a Dotcom Bust survivor, and its shares are down 63% from its all-time Dotcom Bubble high in August 2000 of $75. The time to buy Intel was in 1972, and the time to sell and go away was in August 2000 (data via YCharts): 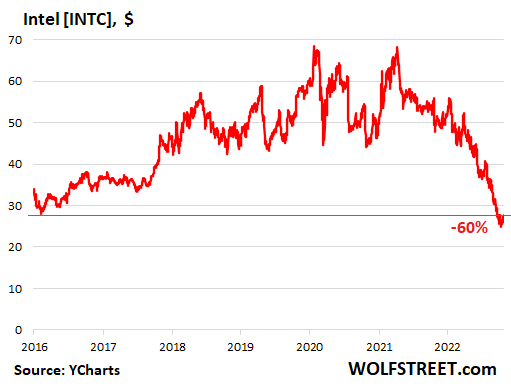 Apple’s shares, which had dropped 3% during the day, initially fell afterhours upon its earnings report but then recovered to about unchanged at the moment, at $145.35 a share, down only 20.5% from the high in January 2022, and only back where it had been in July 2021.

It reported a mixed bag of flat net income, and an 8% gain in revenues, beating expectations on the top and bottom lines, but missing by a little on service revenues and iPhone revenues, amid “a challenging and volatile macroeconomic backdrop,” as it said.

But share repurchases were gigantic – using up all of its cash flow to buy back $25 billion of its own shares in the quarter and $89 billion in the 12-month period – thereby reducing its cash and marketable securities to $48 billion, the lowest in many years, and less than half the amount in 2019.

In line with its pandemic era habit, Apple did not offer a forecast beyond the “challenging and volatile macroeconomic backdrop,” and that may have been a good thing, because some spooky number and a big drop in Apple’s stock would have been a nightmare at this point (data via YCharts): 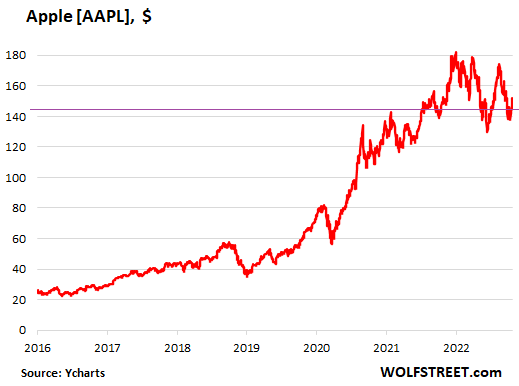