Snap is a paragon of my Imploded Stocks. Meta, after tonight’s drop, is just a hair away.

Snap is the first of the major advertising-dependent social-media or “tech” companies to report earnings for Q3, and once again made a mess all over the place. The same thing happened three months ago when it reported earnings and burned down the whole neighborhood.

But the 26% plunge tonight can barely be seen on this holy-cow-collapse-chart that shows off a paragon of my Imploded Stocks in all its glory: 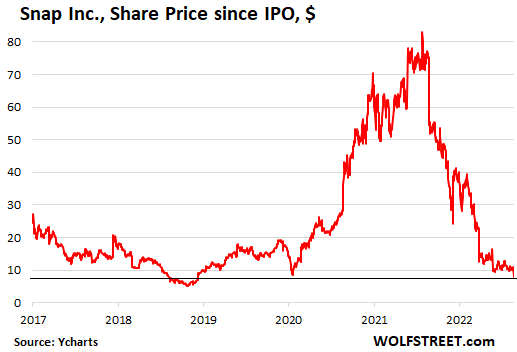 The company is infamous for losing gigantic amounts of money every year with religious fervor, and without any kind of exit plan. Today it reported a net loss of $359 million in Q3, bringing its loss year-to-date to $1.14 billion, and its total loss since its IPO in 2017 to $8.3 billion.

The reason it loses so much money is because it lavishes extravagant stock-compensation packages on its executives and employees at shareholders’ expense, who are getting massively diluted. And so, to prop up its collapsed shares, and slow down the dilution, it said that the board had approved a $500 million share-buyback program.

This is kind of funny, for a company that lost over $8 billion since 2018, and lost $1.14 billion so far this year largely due to non-cash losses of the stock-based compensation packages. And now with these share buybacks, SNAP is going to burn $500 million in cash, thereby converting non-cash losses into actual cash incineration. But whatever.

Snap reported – in addition to its huge net loss – that revenues rose only 6% year-over-year, the slowest ever. And it said the Q4 holiday shopping quarter, where advertising normally explodes, would look similarly dreary.

Snap is trying to make a go of augmented reality (AR) and calls itself a “camera company.” With its AR spectacles, users of its app can “reimagine” the reality around them, what they might look in this or that dress or whatever. The idea is that a retailer will work with Snap to allow AR users to try on clothes virtually, for example, and Snap would get paid for this form of advertising with various fees.

Snap blamed the revenue debacle on “a number of factors we have noted throughout the past year”:

It threw shade broadly over Q4 online advertising, which shook up other advertising-dependent stocks:

“We are finding that our advertising partners across many industries are decreasing their marketing budgets, especially in the face of operating environment headwinds, inflation-driven cost pressures and rising costs of capital.”

And it then refused to provide a full forecast for Q4, with this explanation:

“Forward-looking revenue visibility remains incredibly challenging, and this is compounded by the fact that revenue in Q4 is typically disproportionately generated in the back half of the quarter, which further reduces our visibility.”

Burning down the whole neighborhood:

Social media and “tech” companies that derive a big part of their revenues from online advertising, but that will report earnings over the next couple of weeks, got hit by Snap’s mess, except Twitter, which has a buyout offer on the table from Musk at $54.20 a share, and that kind of locks in the share price.

Meta, which has staked its existence on the metaverse and changed its name to reflect that, even if no one else is in its metaverse, has been on an amazing downward spiral and as of tonight is just three percentage points away from qualifying for my Imploded Stocks – it needs to be down 70% from its high to be awarded this honor. The stock is about even with its March 2020 low, and is back where it had first been in August 2016: 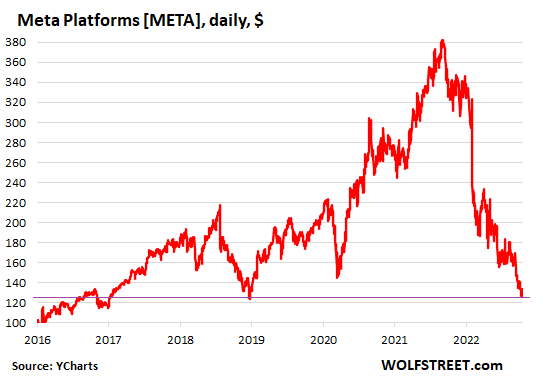