The FOMC voted unanimously to hike its policy rates by another 75 basis points, the third hike of this magnitude in a row. This brought the target for the federal funds rate to a range between 3.0% and 3.25%.

At every meeting, the Fed has increased its projections where its policy rates would be by the end of 2022. As per its “dot plot” today, the median projection by FOMC members for the mid-range of the federal funds rate jumped by a full percentage point from the last projections, to 4.4%.

This means a target range between 4.25% and 4.5% by the end of 2022, which means an additional 125 basis points in hikes spread over the next two meetings, much higher and much more aggressive than expected.

In the statement, the Fed said it “anticipates that ongoing increases in the target range will be appropriate.”

“In my view and the view of the Committee there is a ways to go,” Fed Chair Jerome Powell said at the press conference.

“We’re taking forceful and rapid steps” to get this inflation under control, he said.

“The longer the current bout of high inflation continues, the greater the chance that expectations of higher inflation will become entrenched,” Powell said.

The Fed is now purposefully crushing the entire Fed-pivot fantasy that has been widely propagated for months.

“Restoring price stability is essential to set the stage for achieving maximum employment and stable prices over the longer run,” he said.

“We will keep at it until we are confident the job is done,” he said.

The Fed raised all its policy rates by 75 basis points today:

QT, which shifted into full speed in September, will continue at that pace. Powell pointed out several times during the press conference that QT was an important tool in cracking down on inflation.

Asked when the Fed would shift policy and start outright selling mortgage-backed securities (rather than just letting them come off via the pass-through principal payments), Powell reiterated what had been said before many times that this would be an option later on in the QT process, after QT is already “well underway.”

The Theme: People are suffering from inflation.

At least since the July meeting, the Fed has been hammering home the theme that the people, particularly those at the lower end of the income spectrum that have to spend all their income on necessities, are “suffering from inflation.” And that’s why the Fed has to crack down on inflation, even if unemployment rises and the economy slows – and Powell repeated that theme in the press conference today several times.

“People are seeing their wage increases eaten up by inflation,” Powell said today. When you spend all your money on necessities, and then those prices go up, that hurts, he said.

High inflation is “very painful” for people at the lower end of the income spectrum, he said. “Inflation is really hurting.”

Housing market “will have to go through a correction.”

The housing market is interest-rate sensitive, and is already reacting to the rate hikes, he said. After the “unsustainable” price increases recently, “the housing market will have to go through a correction … to get to where people can afford housing again,” Powell said.

And he expects that the CPI for housing costs, which are now a big driver behind overall CPI, would remain elevated for a while.

Labor market still “extremely tight,” must get back into “balance.”

Despite the slowdown in economic growth – the median dot plot projection for GDP growth this year was lowered to 0.2%, and for next year to 1.2% – “the labor market has remained extremely tight, with the unemployment rate near a 50-year low, job vacancies near historical highs, and wage growth elevated,” Powell said.

There are “not many signs” that the labor market is cooling, he said.

“The labor market continues to be out of balance, with demand for workers substantially exceeding the supply of available workers,” he said.

To crack down on inflation, the Fed is trying to bring the labor market back into “balance.” The median projection from FOMC members for the unemployment rate rose to 4.4% by the end of 2023 – which would be somewhere around recessionary levels.

Powell warned repeatedly against premature rate cuts. “A failure to restore price stability would create much greater pain later on,” he said.

The effects of changes in monetary policy on inflation are not immediate but come after the often cited “long and variable lag.” At some point, the Fed will have to slow its rate hikes and then hold rates steady to see how it’s going. And at some point, they may cut rates. Where is this level?

Powell wouldn’t say. But he did say what they’re looking for. They want to see “compelling evidence” that inflation is heading back to 2%.

And he said that various core measures of inflation really haven’t gone down at all. And so further rate hikes are needed.

The “Real EFFR” and rate cuts.

CPI inflation in August was 8.3%. On this basis, the inflation-adjusted or “real EFFR” is still a negative 5.22%.

The Fed’s slowness last year and early this year in reacting to inflation is unprecedented in modern times. The Fed is now catching up, but even with today’s policy rates, the Fed may still be pouring fuel on the inflation fire.

Note that the Fed has never started to cut rates when CPI was above the EFFR. So as Powell said, “there is a ways to go.” 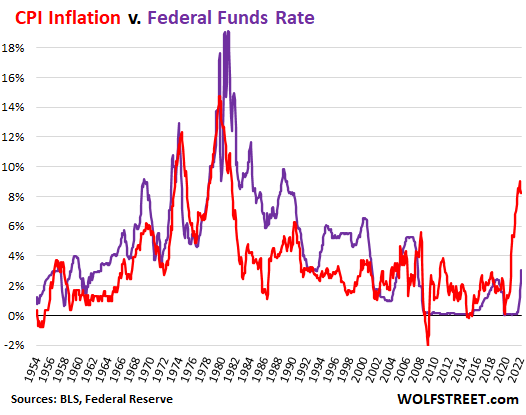 286 comments for “Powell’s Whatever-it-Takes Moment: Policy “WILL Be Enough to Restore Price Stability.” Fed Hikes by 75 Basis Points. Shocker, Sees 4.4% by End of 2022”