So where’s my free lunch?

I was asked once again why all this central-bank “money-printing” along with global zero-interest-rate or even negative-interest-rate policies haven’t caused a big bout of inflation, considering how currencies are getting watered down.

It’s a crucial question that baffled many minds for a while, but now, as this thing has been dragging out for seven years, bouncing from one major central bank to the next, without end in sight, the answer is becoming clearer.

This chart by NBF Economics and Strategy shows the growing pile of assets, expressed in dollars, that the “four big central banks” – Fed, ECB, Bank of Japan, and Bank of England – have heaped on their balance sheets: nearly $11 trillion. This does not include what China is doing. The forecasts for 2016 and 2017 assume that the Fed and the Bank of England will stay away from QE, that the BoJ will add annually ¥80 trillion (with a T) to its pile and the ECB €60 billion, with exchange rates unchanged: 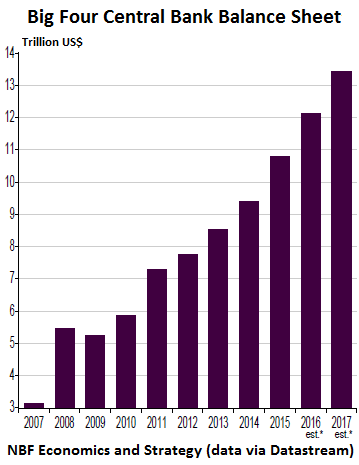 Just about the only major asset class that didn’t experience gains is the commodities sector. There, prices have collapsed. And we’ll get to that in a moment.

So why has QE caused rampant asset price inflation but little consumer price inflation? Because the money never went to consumers – in form of wages. They would have spent most of it, thus driving up demand that could have created some inflationary pressures in consumer prices. But they never got this money.

OK, there has been confiscatory inflation in parts of the consumer price spectrum, for example in healthcare and college expenses. This chart by Advisor Perspectives shows that since 1991, college tuition and fees have soared 338% and medical care 167%. Increases have accelerated since 2001, through heck or high water… 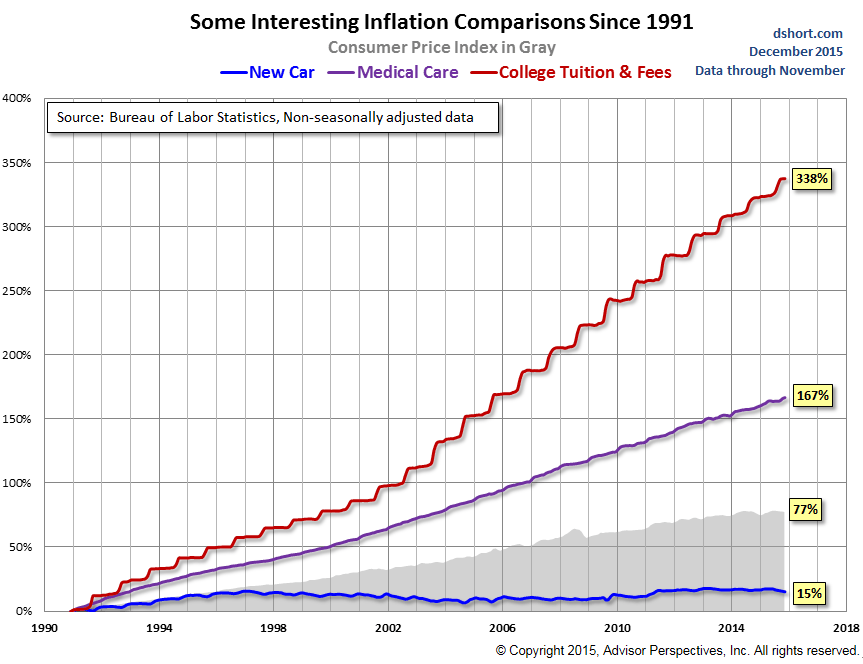 So folks with kids in college and chronic medical problems have been getting whacked by inflation. But that form of inflation has been going on for many years and has been caused by factors other than current monetary policies.

So why has QE not caused a big bout of consumer price inflation? Because the money has been channeled to big financial and corporate entities, and they plowed it into financial and other assets (including share buybacks and other forms of “financial engineering”), thus pushing up asset prices.

As asset prices jumped, people holding these assets got richer and invested their gains, thus propagating the asset price booms. These already wealthy people didn’t need to spend their gains (what Bernanke called the “wealth effect”) because they already were spending all they wanted to spend. So the asset price boom had little impact on consumption and thus didn’t create inflationary pressures from consumers (however, some luxury items like yachts did see a spurt of activity).

QE and ZIRP put a priority on capital rather than labor. So inflation-adjusted wages for the lower 80% of households have declined, a trend that started after the real-wage peak in 2000, and accelerated with the Financial Crisis. Since 80% of households have less spending power, and a good part of them much less spending power, consumers can’t spend as much unless they borrow more, and this too keeps a lid on consumer demand and inflationary pressures.

This chart by Advisor Perspectives shows that chez the top 5% of households (dotted black line) and the top 20% (blue line), things don’t look too bad in terms of inflation-adjusted mean income. The 1% is mercifully not shown separately. But what has happened at the lower 80% of households (circled in red) is wage deflation: 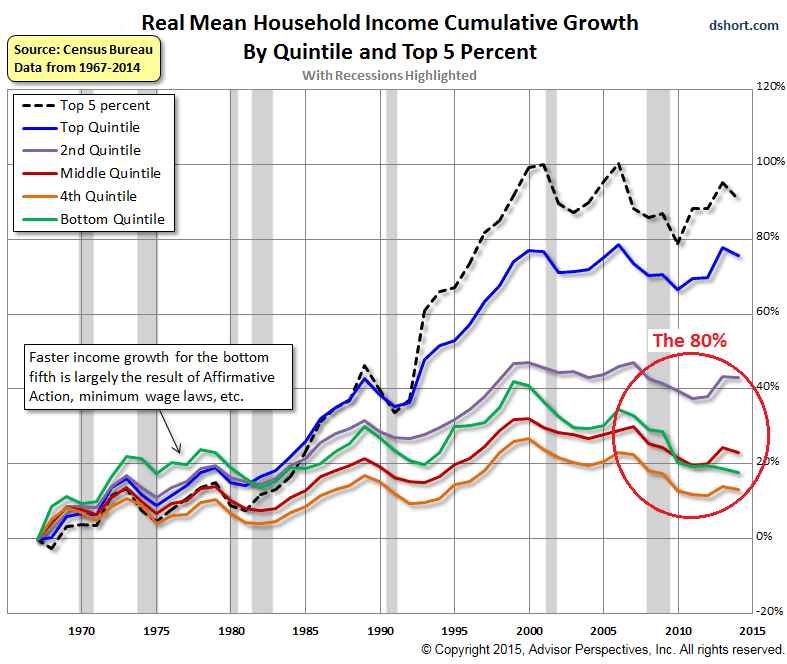 The Fed keeps a hawk’s eye on wages, especially in the lower 80% of the workers. Its goal is to provide cheap labor to corporate America. And when wage inflation ticks up, the Fed can get quite radical about rate increases.

But because cheap labor makes for bad consumers, the Fed is trying to make cheap debt available to them, turning them into debt slaves, problem solved, for the moment.

So this is one lesson we learned: QE channeled to financial and corporate entities causes asset price inflation, not consumer price inflation. And it tends to exacerbate wage deflation at the lower 80% of households.

One of the exceptions is rent. When residential property prices soar, rents tend to follow. And rents have increased sharply in many cities. But unlike stocks, people have to live in these units, and when rents move beyond their reach, all kinds of things happen, including property price crashes.

QE and zero-interest-rate policies (ZIRP) cause something else: an insidious “search for yield” when investors try to earn a discernible yield in an artificial zero-yield environment, which pushes even conservative investors way out on the risk curve as they search for minuscule and diminishing traces of yield. Their efforts compress yields on risk assets further. And so we end up with utter absurdities, such as risky junk bonds yielding less than 5% in 2014. Now investors are getting wiped out with this things.

This activity floods entire and very risky sectors with huge amounts of money for way too long. The result is “malinvestment” in unproductive assets and activities or in too-crowded sectors, which causes overproduction and gluts, such as in ocean container shipping, US oil & gas, mining & metals, other commodities, even ghost cities in China…

Gluts cause prices to collapse, as we now see. And when prices collapse, the capital that went into these sectors gets destroyed. Malinvestment is a terrible thing.

This collapse of energy and other commodity prices, including agricultural commodities, is filtering into consumer prices and pushes down consumer price inflation. In this manner, over the years, QE and ZIRP create deflationary pressures!

87 comments for “I was asked: Whatever Happened to Inflation after all this Money-Printing?”