The long-term effects will echo for a decade or more.

Oil prices fell by over half from June 2014 to January 2015 (Brent:  $110 to $50), then another one-third since (to $35). Natural gas and coal prices have also plunged, partially due to the same forces but also from substitution.

These are the results from a modest slowing of demand growth and — more importantly — the decision of the Saudi Princes to wage the first financial war against next-gen oil producers, those that tap oil sands, shale fields, and deep ocean deposits.

This is how Bloomberg put it:

Saudi Arabia won’t be satisfied with another temporary rebound in oil prices, such as the one that occurred last spring: Their U.S. competitors would just increase output again. They must inflict permanent damage by demonstrating to investors that with shale, they can’t bet on any kind of predictable return.

This will not end quickly; the list of casualties will be long. Goldman found $1 trillion in “stranded” or “zombie” investments in oil fields — a year ago at $70 oil. At $35 oil the total would be much larger.

The end will come with the bankruptcy or restructuring of many next-gen oil corporations, followed by a newly empowered (and perhaps expanded) OPEC cutting production to bring spare capacity back to average (3 or 4 million b/day) — providing a valuable production cushion for the world economy’s supply of this vital input. The long-term effects will echo for a decade or more: a higher cost of capital for and depressed risk-taking in the petroleum and coal industries.

The bond market has already begun to price in the coming bankruptcies of oil and natural gas Exploration and Production companies. But the geopolitical implications remain largely unexplored.

As a first cut, the aggregate global gains and losses from lower energy prices sum to zero. The full effect depends on the balance between the small gains in the majority of regions that import energy — and the potentially catastrophic effect on those that produce it.

This short period of lower prices provides an opportunity for energy importers (including the US) to prepare for the higher prices to come. Foolish nations sell into low prices, such as America’s sales from strategic oil reserve at generational low prices (as Clinton did in 1997). Smart nations increase their energy efficiency and, even more importantly, cut energy subsidies (listed in the New York Times and Financial Times).


Malaysia led the way with reforms whose effects will continue long after oil prices recover. The IMF:

After raising electricity tariffs in early 2014, [the Malaysian government] took advantage of lower energy prices in the second half of 2014 to reduce and ultimately remove remaining gasoline and diesel subsidies. … [Subsidy reform should] help broaden the base of [the] federal revenue system and diversify it away from volatile oil and gas revenues. …The removal of subsidies freed up resources that can be redirected to better support poorer households through better targeted cash transfers.

As for the energy exporting nations, some are far better able to withstand low oil prices than others. But the effects have already begun to appear in their currencies and GDP.

Most exporters began this down cycle with lower debt levels than during the oil shocks of the late 1980s and 1990s. Those with rainy day funds (e.g., Alaska, Saudi Arabia, Norway) are running them down, making their futures look less secure. Those without them cut spending, often throwing their economies into recession. Many of these nations have weak political structures unable to take the resulting stress.

The weakest are already suffering.

Venezuela is breaking. Brazil is on the rocks, Russia grows weaker. Each month of lower prices adds to the casualty list, with effects that eventually will shake the world.

These nations suffer conditions that the IMF often describes as needing “bold structural reform.” In fact they need higher oil prices — or a miracle.

The commodity bear market is more than oil

We’re in a global bear market in commodities, with some unpleasant side effects for the US: customers for US exports are getting hit. Coal is down 45% since 2003; food prices are down one-quarter (priced in US dollars). Copper and zinc prices are at six-year lows; nickel is at a twelve-year low. 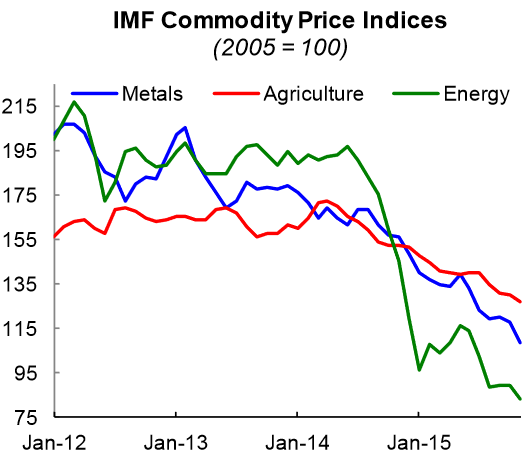 This could easily ignite global debt deflation – a bad thing in our high-debt world.

Adding to the woes of commodity exporters, the Fed has begun hiking rates — boosting the US dollar, causing a variety of problems for these nations. And the world economy appears to be slowing, with the possibility for China to lead it into a recession. By Larry Kummer, Editor of the Fabius Maximus website.

Low oil prices are the wreckage from a war – a financial war. Read… Financial War over Oil Reshapes World, Will End with Much Higher Prices

26 comments for “Lower Oil Prices Are Shaking the World”