And look what happened to per-capita mortgage debt.

Growing consumer debt is the Holy Grail. Since household incomes have not kept up with consumer price inflation, and since college and medical expenses are on a runaway train, and since rampant asset price inflation has whipped housing costs into frenzy, the economic leadership in the US wants consumers to pay for it by taking on more debt.

Alas, after the Financial Crisis, consumers began paying off some debts and defaulting on others, causing big ripples in this elegant debt-driven rather than income-driven economic model. And it kicked off the race to get consumers back into a borrowing binge.

By now, this evil deleveraging has been mostly vanquished. The chart shows debts of households and nonprofits, which the Federal Reserve tosses together into one bucket. From the peak in Q3 2008 of $14.1 trillion, household debt began to dip during the Financial Crisis, bottomed out at $13.3 trillion in Q3 2012, and has been rising since, reaching $14.1 trillion in Q3 2015, back where it had been during the halcyon days of 2008: 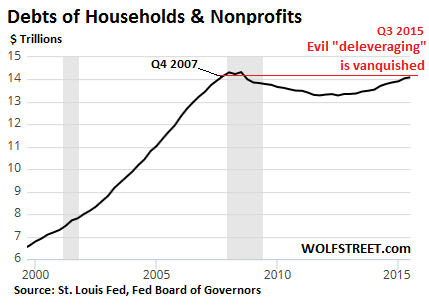 The American Dream of debt is back. But the dynamics have changed. Deleveraging in mortgage debt kicked off with people defaulting on their mortgages during the Financial Crisis, which slashed mortgage balances outstanding. And it continues through the massive influx of cash buyers and investors.

When investors that buy and then rent out properties borrow against these assets, those debts don’t show up in household debt. And foreign homebuyers, such as wealthy Chinese who want to get some of their assets out of harm’s way and have a place to escape to when things get ugly, don’t figure in the data set of US household debts either.

Households are now making up for this hole in mortgage debt by piling on other forms of indebtedness: auto loans and student loans. Each category now exceeds $1 trillion.

However, growth in credit card debt has been stymied by consumers’ stubborn belief, picked up inexplicably during the Financial Crisis, that maxing out credit cards and paying 15% or more in interest in a zero-interest-rate environment is a lousy deal.

But household debt per capita, given the growth in the US population over the years, hasn’t moved in parallel with overall consumer debt. Turns out, on a per-capita basis, consumers are still getting more prudent about debt – to the greatest dismay and frustration of the Fed, other elements of our fearless economic leadership, Corporate America, and foreign manufacturers.

This is the case in many states – that households on a per-capita basis continue to deleverage. But there are some states where per-capita household debt has reached new all-time highs. And the biggest shining example of this isn’t California!

Of the 25 states with the most indebted households, according to New York Fed data, one thing sticks out: in most of these states, overall per-capita household debt (mortgages, student loans, credit cards, and auto loans) is either still declining or flat, and often significantly below the peak of 2008.

In Washington DC, per-capita household debt is the highest in the nation. It’s the clear winner in the series. The Fed should be proud of those households.

In third place? My beloved and crazy California.

This is down a whopping, Fed-defying 22.5% from $80,260 in 2008. Back then, California was number one in the nation in terms of per-capita household debt. The financial crisis was hard on Californians. Its economy crashed. Housing crashed. All kinds of booms and bubbles crashed. And the government went broke and had to issue official IOUs to its suppliers.

Some inland parts of California are still facing economic troubles. The four-year drought, now hopefully ending, has wreaked havoc in the Central Valley. But the Bay Area and the Los Angeles area have been booming: tech companies, startups, housing, construction, commercial property… they’re all floating on a sea of money from all over the world – though we’re seeing signs that some of this money is receding now.

The influence of cash buyers and investors on per-capita mortgage debt? Despite home prices that have raced out of reach for many people and now exceed in many cities the peak of the prior bubble, per-capita household mortgage debt has plunged 26%! Yup.

19 comments for “Which State Has the Most Per-Capita Household Debt? Despite What You Think, it’s Not California”