Grand Collapse in Turkey; to avoid the same fate, Argentina hikes rate to 45%.

On Monday, Argentina’s central bank responded to the currency chaos in Turkey and other sections of the Emerging Markets, including the ongoing collapse of the Argentine peso: It raised its policy rate by five percentage points to 45%.

Argentina’s annual rate of inflation in June surged to nearly 30%, and indications are that this is getting worse. The central bank (the BCRA) is part of the Ministry of Finance, has no independence, and has been tasked over the decades to fund government spending. But at least the current government publishes inflation data. The prior government made inflation a secret and made independent publication of inflation data illegal.

To soothe everyone’s nerves apparently, the BCRA promised to keep the rate at 45% until October. This was the fourth draconian rate-hike since April 27.

Argentina has also received a $50-billion bailout loan commitment from the IMF with which to prop up the peso. This money, which was approved in June, comes with some IMF strings attached. Flush with this bailout money, the government has since been selling dollars and buying pesos in daily auctions to put a floor under the peso. But on Monday, along with the rate hike, the government stopped throwing those dollars out the window, hoping that higher rates will do the job. 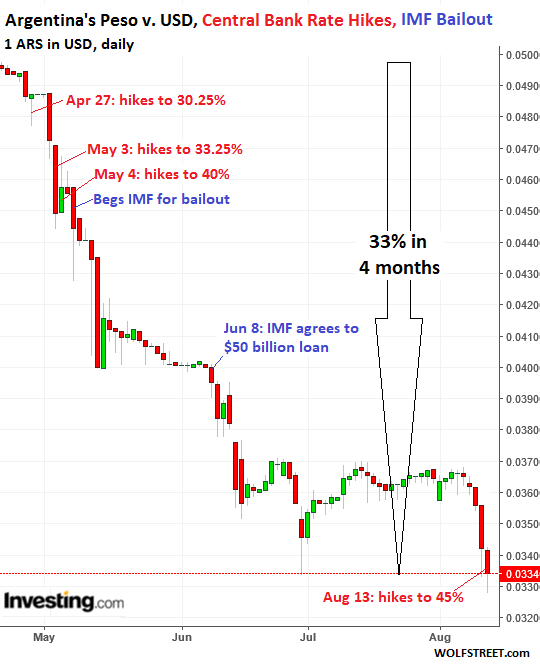 Oh my, what a change this is from June 2017, the peak of the junk-bond craziness, when Argentina, which is junk-rated, was able to sell $2.75 billion of 100-year dollar-denominated bonds, the first time ever that a junk-rated country was able to find investors willing or desperate enough to buy century bonds denominated in a foreign currency – and this from a country that over the past 67 years, has defaulted six times on its foreign currency debts: in 1951, 1956, 1982, 1989, 2001, and its “selective default” in 2014. For the holders of those century bonds, one year down, 99 more to go.

Turkey has its own sets of problems and isn’t even seriously trying to prop up its currency. Now global bondholders are clamoring for the IMF to step in and calm the waters around the currency crisis in Turkey that has turned into a debt crisis that is now dragging some European banks through the dirt. Those global bondholders want the IMF to lend Turkey money to bail out Turkey’s bondholders to put an end to the turmoil and torture in emerging markets bonds that were so hot just eight months ago.

In return for an IMF bailout of its bondholders, Turkey would have to follow the IMF’s program, slash its expenses, including social expenses, and curtail its crazy borrowing binge. But no go.

Instead of trying to address the problem, or beg the IMF for a bailout, the Turkish government has heaped scorn on the West. In return, the Turkish lira plunged another 8% against the dollar on Monday, to 7.04 lira to the dollar.

Seen the other way around, as the chart below shows, the value of 1 lira has now dropped to 14.4 US cents, from 25 cents just four months ago, which, if nothing else, tells people to go figure out how to invest in gold and silver. Monday’s drop brings the grand collapse over the past three days to 24%, and over the past four months to 43%: 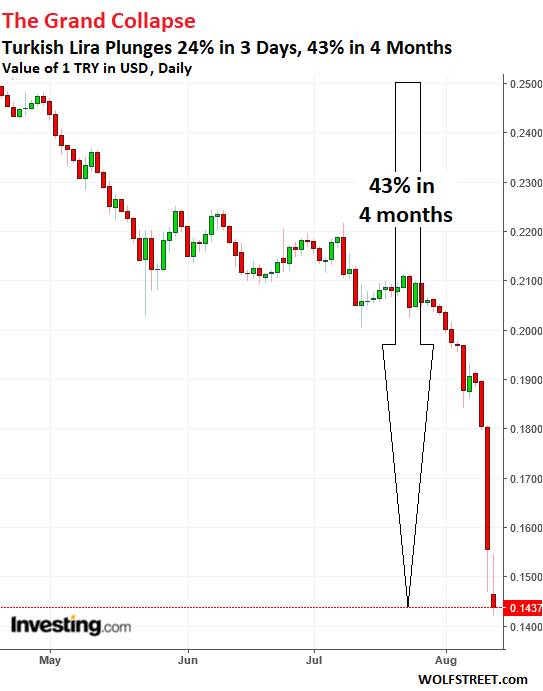 After nine years of experimental monetary policies in the US, Europe, Japan, and elsewhere, the Emerging Market economies have become addicted to this debt borrowed in a hard currency that they cannot inflate away. In Turkey, this cheap debt – cheap even for junk-rated issuers such as the government of Turkey – funded a construction boom in the property sector. This construction boom has been crucial to the economy – which is why the government is trying to ride this bull all the way.

Turkey’s inflation is surging. In July, annual inflation reached 16%, the highest since January 2004. Inflation is what ultimately destroys a currency. But it’s not yet 30% as in Argentina, and perhaps the government thinks it still has some leeway.

The Turkish lira always hits record lows against the dollar, interspersed with brief periods of upticks, because the Turkish government has always destroyed its currency at a blistering speed. But even for Turkey, this is a bit much.

A currency crisis is one thing. But when a currency crisis morphs into a foreign-currency-denominated debt crisis, all heck tends to break lose. This is when the cheaply borrowed dollars and euros that the economy has come to depend on suddenly dry up. And then the whole economic edifice based on this debt tends to come unglued.