The first obvious sign that something was up, that something wasn’t going the right way, came on June 6, 2017, when the housing market in Sonoma County was still booming, according to the data. Sonoma County is a little north of San Francisco, between the Pacific and Napa County. It’s wine and craft-brew country, sprinkled with beautiful cities and towns. And it’s pricy.

“I haven’t seen this one before,” Thomas Stone, a broker in Sonoma County, told me at the time. “Food and booze yes. But $1,000 cash seems qualitatively different.” He’d received the offer of a $1000 cash raffle by Sotheby’s for a broker’s tour of four homes in the city of Novato that Sotheby’s was trying to sell. The $1,000 would go to the winning broker. “Visit All Four Luxury Properties in Novato to Win!” the brochure said (I added the red marks): 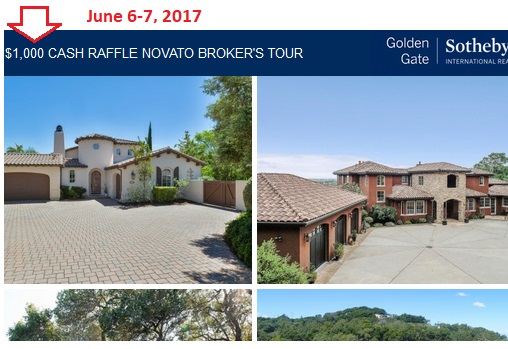 These kinds of antics are an early sign that it’s getting tougher to sell homes at the prices sellers envision. But then came the horrific wildfires that spread across several counties in Northern California, including Sonoma and Napa, killing 43 people, and burning down thousands of homes, including entire neighborhoods in Sonoma County’s largest city, Santa Rosa. The destruction created a burst of demand in some zip codes, but it didn’t last long.

And a year after the $1,000 cash raffle flier had gone out, the inflection point of Sonoma County’s housing market became visible in the subcutaneous data from the Multiple Listing Services (MLS). 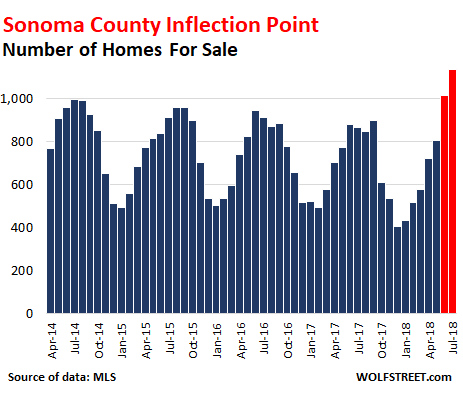 This inflection point becomes even more obvious in the year-over-year increase in the number of homes listed for sale: 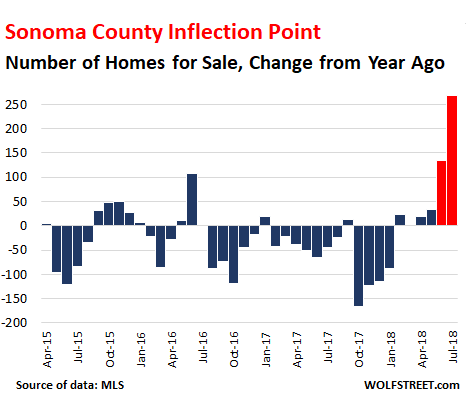 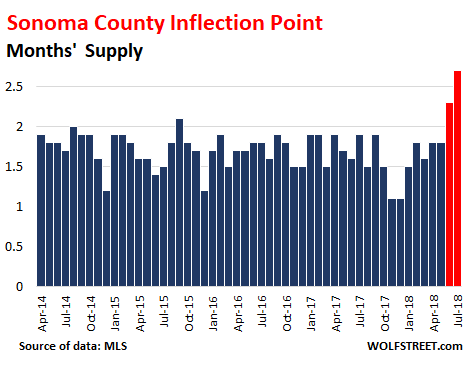 Toward the end of July, Stone said: “The last three weekly office meetings have been focusing on the changing market, how to prepare sellers for lower prices when taking a listing and how to change your marketing to take advantage of the change.”

Brokers only make money when there is a sale. When sellers are asking for more money than buyers are willing to pay, sales stall, and the market grinds down, and volume falls off – until sellers start lowering their prices. It is the brokers’ job to convey a sense of reality to their clients — the sellers.

Stone added another data bit: Of the 114 “new” listings at the time, 30 had been listed before, and had been pulled because they didn’t sell, and now were back on the market as “new” listings. 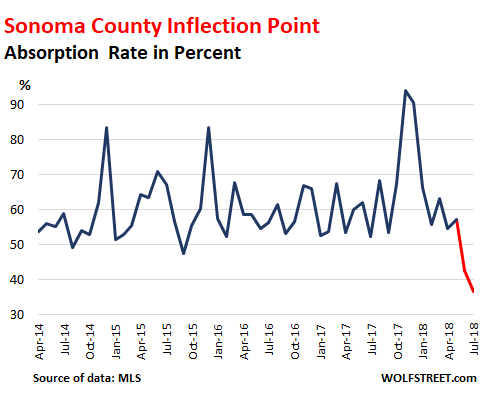 So in this kind of market where the inflection point has become visible to industry insiders, what should sellers do so that their house will sell? Lower the asking price. The chart below shows the “average asking price” of homes listed for sale: 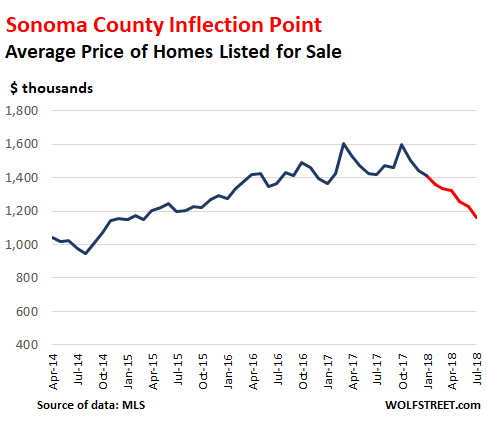 So, what about the median prices at which homes actually sold? The “median sold price” – which means 50% of the homes sold for more, and 50% sold for less – in July dropped to $639,000 – the lowest for the year. But it was still up 6.5% from July last year, and many stories in the media cite this number to show that the housing market is still hot: 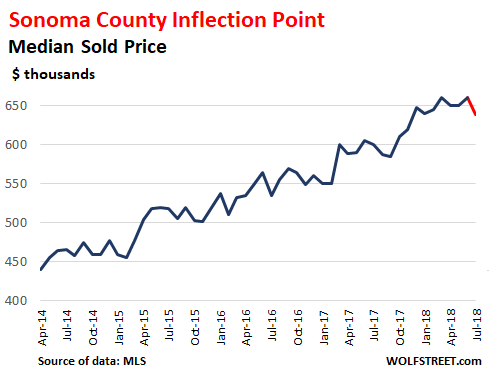 A home is considered sold when the sale has closed. There is some delay between the signing of the contract and the closing of the sale, and the median price in July reflects many deals that were made in a prior month.

But to see what has been happening this year, let’s put the median prices for 2018 under the microscope. July was the low point so far this year, and the lowest since November 2017: 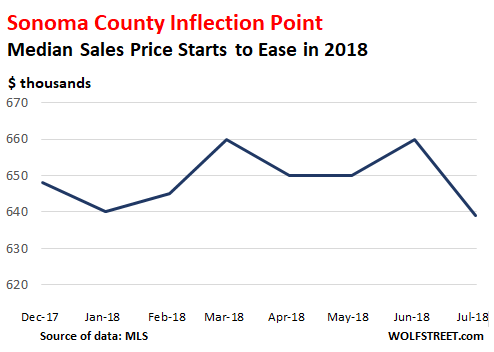 The median price is the last metric to move, and it has met its inflection point in July.

When I talked with Stone a few days ago, he mentioned that the weekly office meetings still focused on how to get sellers to be more realistic. This has now been the case for five weeks in a row. The “vast majority of brokers, except for a few eternal optimists,” expect prices to skid, he said. He expects a 25% correction over the next three years. And the above charts show how it starts at the subcutaneous level, for industry insiders to see, but before it turns into media-ready year-over-year declines in the median price that causes so much wailing and gnashing of teeth.

The Case-Shiller Home Price Index, the way it is designed, lags about three months behind the median price data. According to it, there is a historic spike in Seattle, sharp increases in other metros, but New York condos fall. Read…  The Most Splendid Housing Bubbles in America

87 comments for “Anatomy of the Housing-Market Inflection Point in the Bay Area’s Sonoma County: Insider View”