No signs of inflation slowing down, as measured by the yardstick for the Fed’s 2% inflation target.

The Fed, when it targets inflation and when it says that it wants to bring inflation back down to 2%, uses as its yardstick the inflation index that was released today by the Bureau of Economic Analysis: the Core PCE price index. This is generally the lowest lowball inflation index that the US government produces. It attempts to measure how inflation has spread across the economy, beyond volatile commodities, and so it excludes the food and energy components. Food prices jumped in September but gasoline prices plunged, and both are excluded from this index.

The PCE price index released today is the last inflation index before the Fed’s meeting next week. What the Fed got today is additional evidence that underlying inflation isn’t cooling off, and it got additional support for a 75-basis-point hike, which will take the upper limit of its federal funds target range to 4.0%.

The core PCE price index jumped 5.1% in September, compared to a year ago, the fourth-highest reading in this cycle, behind January, February, and March. All of them are the highest since 1983. You can see that little trough that formed in the index from April through July. But the August and September moved in the wrong direction again: 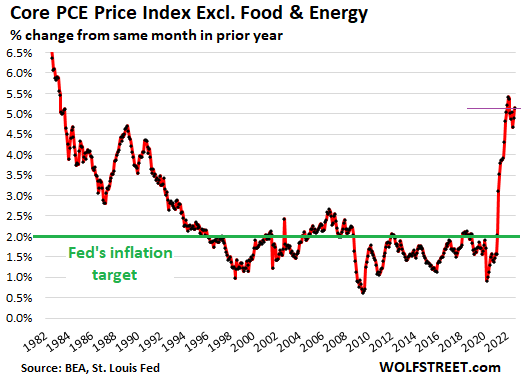 In terms of the Fed’s 2% inflation target as measured by core PCE, inflation is worsening and now measures over 2.5 times the Fed’s target. 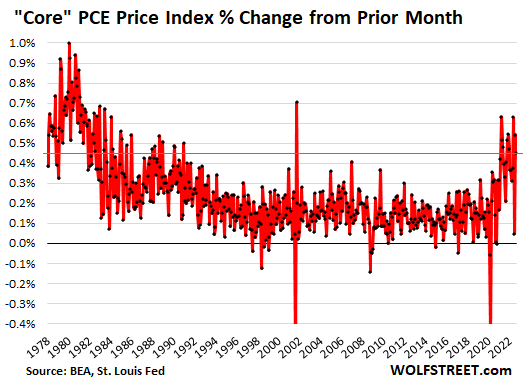 Back in July, the core PCE had risen by just a hair over 0% from June, and it was once again ballyhooed as the end of inflation, and the meme was spread around that inflation had once again “peaked,” but turns out, this was just a one-time event, and raging inflation continues to dish up surprises.

Whether or not core PCE measures actual inflation as you or I experience it is totally irrelevant here. What matters here is that the Fed uses core PCE as a yardstick for its inflation target. It matters for future rate hikes. It matters for the bond market and stock market because it shows how far the Fed is off from its inflation target. And it gives some clues as to where the Fed might be going with its policy rates.

Based on today’s core PCE measure, and on other measures too, including core CPI and services CPI, the Fed has gotten all the ammo it needs to lift its policy rates by 75 basis points next week, and lift them further in December, and next year.

238 comments for “Last, Most Important Inflation Measure before the Fed’s Meeting Next Week, “Core PCE,” Worsened for 2nd Month in a Row”