Meta shares plunge 19% after hours, for a total plunge of 24% for the day: metaverse woes, online advertising, expenses.

So now, after the mess that Big Tech and Social Media companies made during the day, Meta Platforms is making a huge mess afterhours, after it released its quarterly earnings, with its shares down 19% at the moment, after having already plunged by 5.6% during the day. Combined during regular trading and after-hours trading, shares have plunged 23.8%. 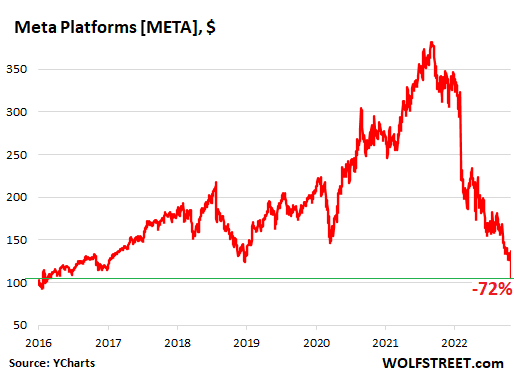 Inducted into my “Imploded Stocks.”

Having plunged by over 70% from the high, Meta now qualifies for, and is thereby officially inducted into my Imploded Stocks. It’s the biggest name in this noble group so far, that started out in the spring of 2021 with just a bunch of crazies, SPACs, and IPOs but has been encompassing ever larger companies since then, in a sign of how the greatest stock market bubble ever started coming unglued beneath the surface in February 2021 and just keeps coming unglued.

With impeccable timing, the stock reached its high in September 2021, right before the company announced in October 2021 that it changed its name from stodgy Facebook to the somehow cool Meta, as in metaverse, in a bet-the-farm move. Turns out, the metaverse isn’t performing, but it’s swallowing up a lot of money.

The stock has not only worked off the entire free-money bubble since March 2020, but also the relentless surge since the December 2018 swoon, plus a bunch more, establishing a new six-year low. Long live the metaverse.

Meta reported “near-term challenges on revenue” this evening, as revenues, most of which came from online ads, fell 4%.

While revenues declined, costs and expenses jumped by 19%, and its income from its “foreign operations” collapsed by 46%, and therefore its net income plunged by over half (-52%). And while at it, Meta lowered its revenue forecast for Q4.

Incinerated $65 billion in cash on share buybacks in less than two years.

Meta is trying to figure out what to do. And one thing it knows it will do: cost cutting. It has for months been talking about its staffing levels. It said today that it would keep its headcount “roughly flat with current levels” in 2023.

And its massive office footprint is going to get trimmed, but those cost cuts are going to cost money “near term” it said in its earnings report, including $2 billion for its office footprint “rationalization”:

“We have increased scrutiny on all areas of operating expenses. However, these moves follow a substantial investment cycle so they will take time to play out in terms of our overall expense trajectory.”

And there are lots of new expenses to be added, including for “infrastructure-related expenses and, to a lesser extent, Reality Labs hardware costs driven by the launch of our next generation of our consumer Quest headset later next year.”

Whatever will happen with the metaverse, user attention has been shifting away from Meta’s products toward TikTok. Apple’s App Tracking Transparency policy is also causing a lot of heartache at Meta, where tracking of everyone on the entire internet is key to its revenues, and Apple is making it harder.

This whole mess comes on top of the stuff thrown out there by Microsoft, Alphabet, Texas Instruments, and Seagate late yesterday and early today.

Yesterday afterhours, Microsoft and Alphabet shook up markets with weak revenue growth and stirred up further worries about the online ad business – after Snap had already made a mess of itself last week over the same thing – and about the cloud business, which then took down Amazon, which derives most of its profits from its cloud services division AWS. And the plunging demand for PCs caused Microsoft’s Windows revenues to plunge 15%. There has been talk of hiring freezes and layoffs for months.

Seagate Technology, which makes disc drives including for PCs, added to it this morning when it said that it plans to cut 8% of its global workforce, or about 3,000 people, “to sustainably lower costs,” as CEO Dave Mosley put it during the earnings call, after reporting that revenues in the quarter plunged by 35%, and that its net income essentially vanished, plunging by 94%.

Here are how some of the tech and social media stocks performed today. Meta includes today’s afterhours trading. All others are as of the close today: