“Not enough” v. “Too much”: If not enough, it “will require much higher interest rates and potentially a severe recession to control inflation. No one wants that.”

The Bank of Canada hiked the target for its overnight rate for the sixth time in a row, today by 50 basis points, to 3.75%, the highest since 2008, following the 75-basis-point hike in September and the 100-basis-point hike in July. Since it started the rate-hike cycle in March, the BOC has jacked up its rate by 350 basis points. Quantitative tightening, which already reduced the BOC’s balance sheet by 25%, will continue on autopilot.

And “the policy interest rate will need to rise further,” the BOC said in the statement.

“How much further will depend on how monetary policy is working to slow demand, how supply challenges are resolving and how inflation and inflation expectations are responding to this tightening cycle,” BOC governor Tiff Macklem said in his opening statement at the press conference.

While overall CPI inflation has declined from 8.1% earlier this year to 6.9%, largely due to the drop in gasoline prices, as the BOC pointed out in the statement, core inflation measures “are not yet showing meaningful evidence that underlying price pressures are easing.”

“Inflation in Canada is broad-based, reflecting large increases in both goods and services prices,” Macklem said at the press conference.

Given this inflation scenario, and “ongoing demand pressures in the economy,” the BOC “expects that future rate increases will be influenced by our assessments of how tighter monetary policy is working to slow demand, how supply challenges are resolving, and how inflation and inflation expectations are responding.”

“We are resolute in our commitment to restore price stability for Canadians and will continue to take action as required to achieve the 2% inflation target,” the BOC said.

“Quantitative tightening is complementing increases in the policy rate,” the BOC said. Since peak-balance-sheet in March 2021, the BOC’s total assets have dropped 25%: 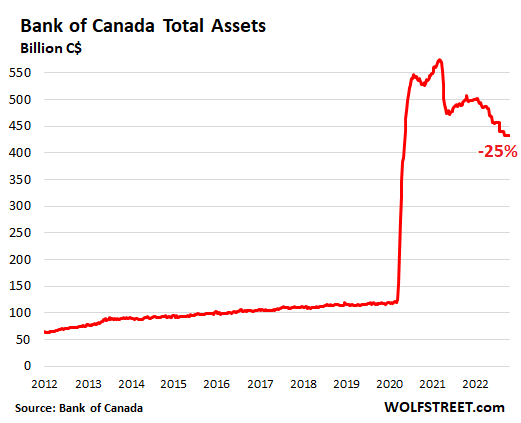 The BOC has shed its repos (green in the chart below) and short-term Canada Treasury bills (purple) starting in mid-2020. It never bought many of the other assets on its QE list to begin with. And it started shedding Government of Canada bonds in February 2022 (red line). What is rising on its balance sheet is the amount that the government has agreed to pay the BOC to cover any losses on its bond holdings under the indemnity agreement they entered into in March 2020 (“Indemnity” in this chart): 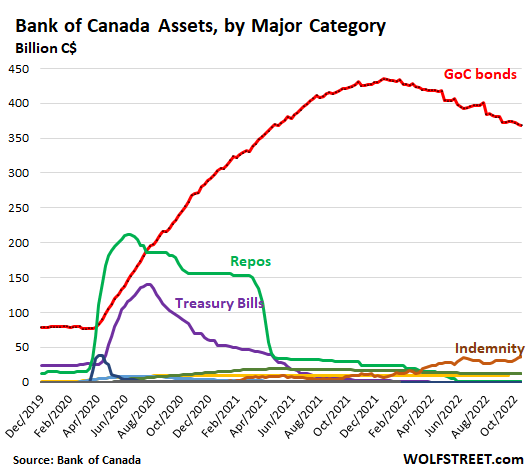 1. “Inflation in Canada remains high and broad-based.” Though it has “come down in recent months, but we have yet to see a generalized decline in price pressures.”

2. “The economy is still in excess demand—it’s overheated. Households and businesses want to buy more goods and services than the economy can produce, and this is driving prices higher.”

3. “Higher interest rates are beginning to weigh on growth. This is increasingly evident in interest-rate-sensitive parts of the economy, like housing [in fact, home prices are plunging at the fastest pace on record] and spending on big-ticket items. But the effects of higher rates will take time to spread through the economy.”

4. “There are no easy outs to restoring price stability. We need the economy to slow down to rebalance demand and supply and relieve price pressures. We expect growth will stall in the next few quarters—in other words, growth will be close to zero. But once we get through this slowdown, growth will pick up, our economy will grow solidly, and the benefits of low and predictable inflation will be restored.”

5. “Finally, we are trying to balance the risks of under- and over-tightening.”

“If we don’t do enough, Canadians will continue to endure the hardship of high inflation. And they will come to expect persistently high inflation, which will require much higher interest rates and potentially a severe recession to control inflation. Nobody wants that,” Macklem said.

“If we do too much, we could slow the economy more than needed. And we know that has harmful consequences for people’s ability to service their debts, for their jobs and for their businesses,” he said.

“This tightening phase will draw to a close. We are getting closer, but we are not there yet,” he said.

“Higher policy interest rates are beginning to slow demand. Higher mortgage rates have contributed to a sharp slowing in housing activity from unsustainable levels, and consumer and business spending on goods is moderating. This has led to declines in house prices [well, the sharpest declines on record] and is exerting downward pressure on goods prices,” Macklem said.

“Moving forward, we expect the effects of higher interest rates to continue to work through the economy, moderating household spending and business investment,” and GDP growth will “stall through the end of this year and the first half of 2023 before picking up in the second half,” he said.

Canadian households rank among the most over-indebted in the world, largely due to housing loans. And housing prices are now plunging at the fastest rate on record. Since most mortgages in Canada are either variable-rate or fixed-rate for shorter terms, such as fixed rates for two years or five years, households see rate increases impacting their existing mortgage payments.

And the BOC said it is “mindful” of this – but is brushing off the home price plunges “from unsustainable levels” and remains “focused on our mandate” which requires the BOC to bring inflation down with “higher interest rates”:

98 comments for ““No Easy Outs to Restoring Price Stability”: Bank of Canada Hikes by 50 bpts to 3.75%, More Hikes to Come, QT to Continue, as “Unsustainable” Home Prices Plunge, GDP “Stalls””