As the Bank of Canada’s rate hikes and QT goose mortgage rates, some practically funny price spikes are getting unwound very fast.

Canada’s housing market is trying to figure out where reality is? After the era of ridiculous house-price spikes, triggered by the Bank of Canada’s interest rate repression and QE, the BoC now gets to grapple with raging inflation by hiking interest rates and shedding assets (QT), which has been pushing up mortgage rates, which renders them indigestible for hyper-inflated markets, though not all markets are hyper-inflated, as we’ll see in a moment.

So, the overall 11-City Teranet-National Bank House Price Index plunged by 3.1% in September from August, the biggest month-to-month plunge ever, after having plunged 2.4% in August from July, which had matched the then biggest ever Lehman-bankruptcy plunge in December 2008. 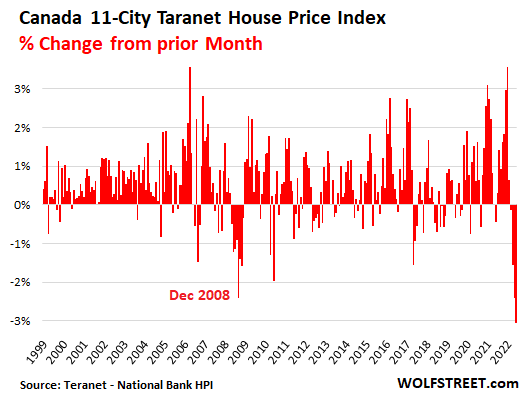 Over the past four months, the index dropped 7.0%, the biggest four-month drop ever. The four months of declines slashed the year-over-year spike from the 19% range in March and April to 6.0% in September.

Hamilton, Ontario, had become the #1 All Time Ever Most Splendid Housing Bubble in Canada in January 2021 when it surpassed Vancouver, as measured by the Teranet-National Bank House Price Index (the index was set at 100 in June 2005 for all cities). Hamilton had already surpassed Toronto months earlier. These price increases were so extreme that they were funny.

But now the hot air is coming out of this most splendid housing bubble. In September, prices plunged by 3.3% from August, after the 5.8% plunge in August from July. Over the past four months – since the ridiculous spike-tippy-top in May – prices plunged by 13.5%, which cut the year-over-year price increase to 5.6%. 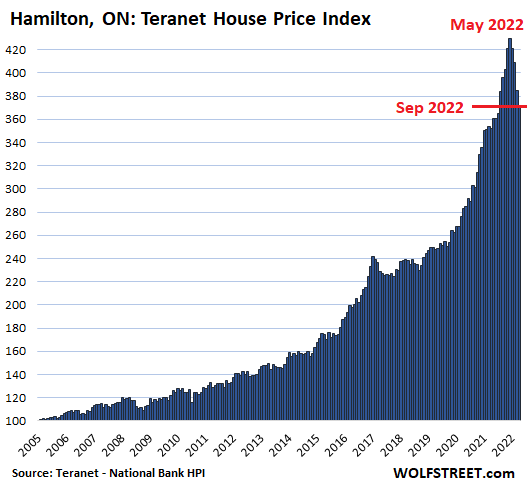 In the Greater Toronto Area, after the ridiculous spike peaked in May, home prices plunged 3.0% in September from August. Over the four months, the index has plunged by 11.1%, cutting the year-over-year gain to 4.5%: 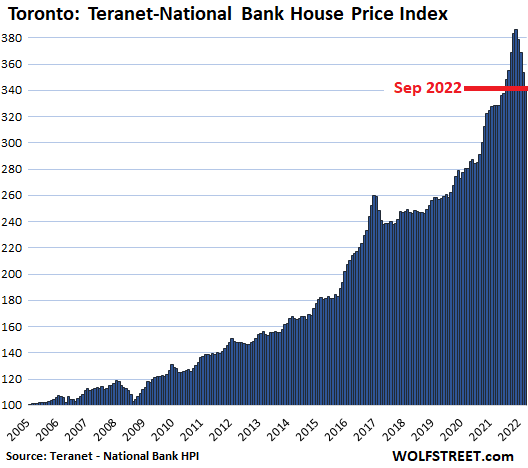 In Greater Vancouver, house prices plunged 3.9% for the month after having dropped 2.0% in the prior month. Since the peak in April, prices have dropped 7.8%, which cut the year-over-year increase to 3.9%: 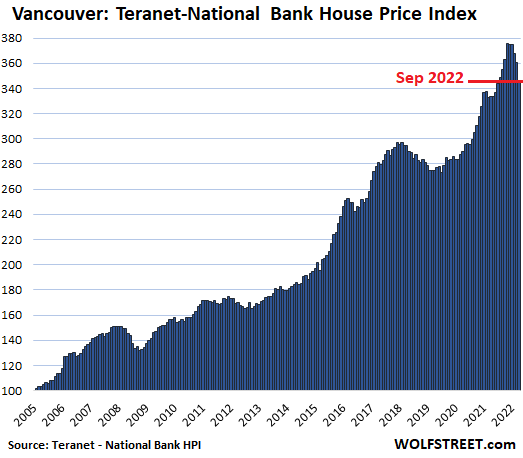 In Victoria, house prices plunged 6.9% in September from August and are down 9.4% from the peak in May. This whittled down the year-over-year gain to 4.7%: 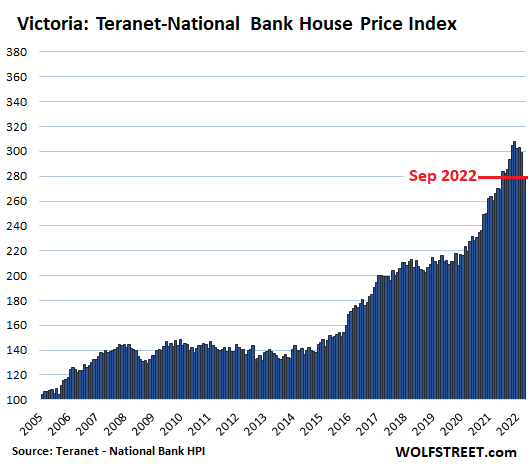 The methodology of the Teranet-National Bank House Price Index is based on “repeat sales” that tracks the price of the same home each time it is sold over time. Unlike median prices, the “repeat sales” method is not impacted by a shift in mix of the homes that sold. The data here is not seasonally adjusted.

In Halifax, after its hugely splendid housing bubble with year-over-year price spikes in the 35% range, prices dropped 8.8% since the peak in June, with September about unchanged from August, after prices had plunged 5.3% and 3.6% in July and August respectively. Over those months, the year-over-year gains have been cut roughly in half, to 16.4%: 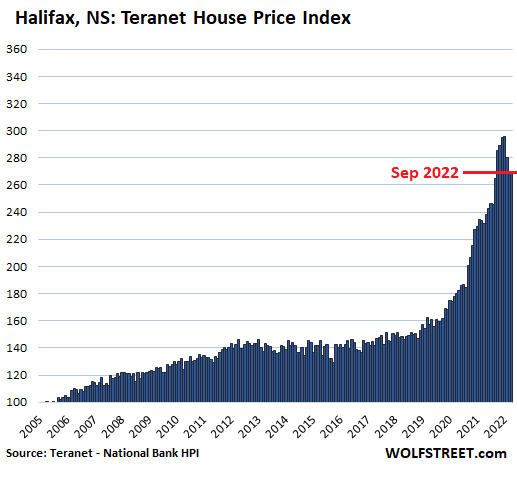 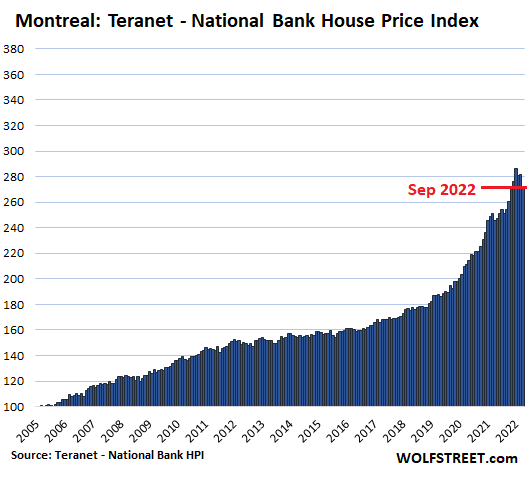 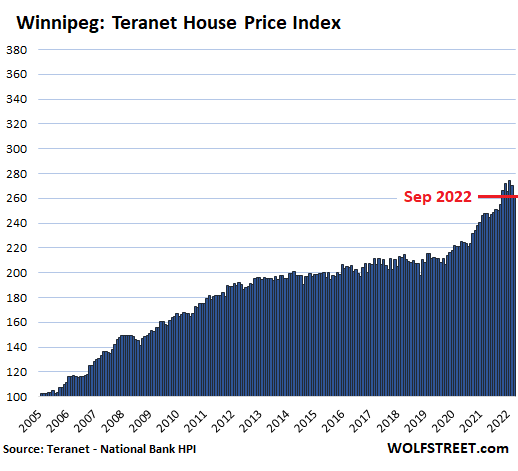 In Ottawa, house prices plunged 3.5% in September after having plunged 3.1% in August and are down 8.0% from the peak in June. They’re still up 5.0% year-over-year: 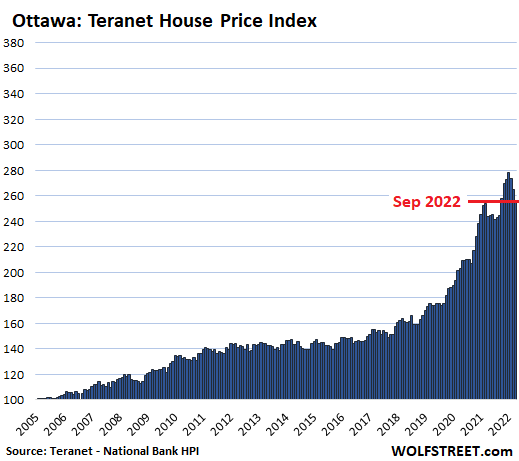 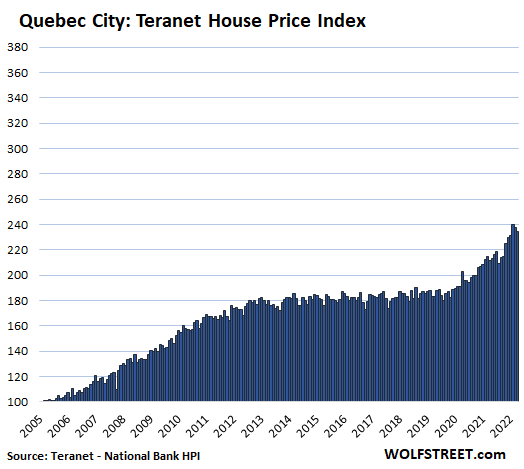 In Calgary, oil capital of Canada, house prices edged up in September by 0.3% to a new high, and are up 14.7% year-over-year. Prices had been roughly flat from mid-2007 until mid-2020 when the Bank of Canada’s money-printing binge goosed the market. Not much of a housing bubble anymore, though it was quite splendid into mid-2007: 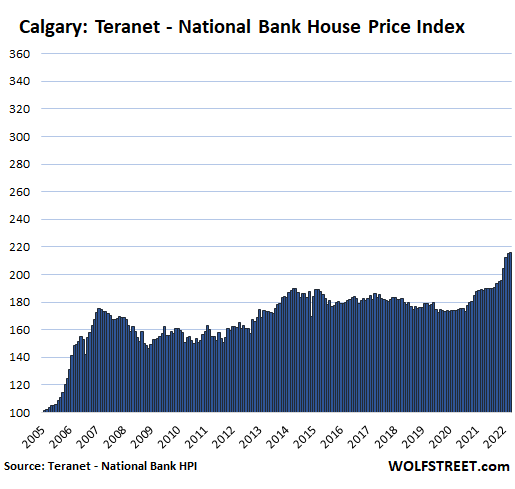 In Edmonton, also in Canada’s oil patch, house prices also edged up 0.3% to a new high, bringing the year-over-year gain to 5.6%, after 15 years of essentially no house price increases, following the oil bubble through mid-2007: 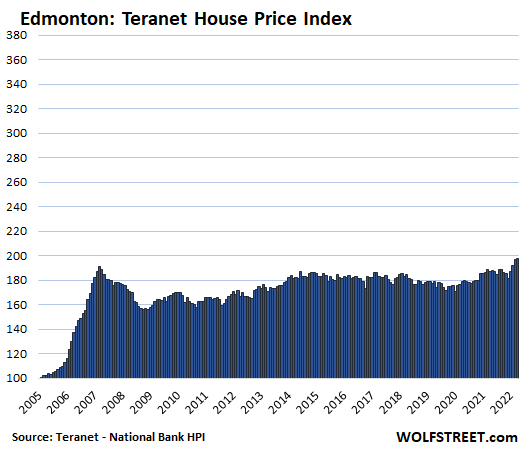 140 comments for “The Most Splendid Housing Bubbles in Canada, October Update: Prices Plunge at Fastest Pace on Record”