“Housing market is pulling back as anticipated, following unsustainable growth during the pandemic.”

The Bank of Canada hiked the target for its overnight rate for the fifth time in a row, today by 75 basis points, to 3.25%, the highest since 2008, following the 100-basis-point monster hike at the last meeting, which got everyone’s attention.

In the statement, the BoC said that its policy interest rate “will need to rise further,” as the outlook for inflation and inflation expectations remain high, and it’s “resolute” in its “commitment” to bring this inflation under control, thereby squashing any hopes for a “pause” at the next meeting.

Quantitative tightening will proceed on autopilot, “complementing increases in the policy rate,” it said. So far, total assets on its balance sheet have dropped by 24% from the peak.

How much “further” will rates have to rise? The BoC didn’t say. But it’s thinking about it:

“As the effects of tighter monetary policy work through the economy, we will be assessing how much higher interest rates need to go to return inflation to target,” it said, but didn’t mention “frontloading” this time. In other words, it’s going to be dependent on data.

The statement said that plunging gasoline prices caused overall CPI to cool slightly from red-hot 8.1% in June to 7.6% in July, both of them 40-year highs. 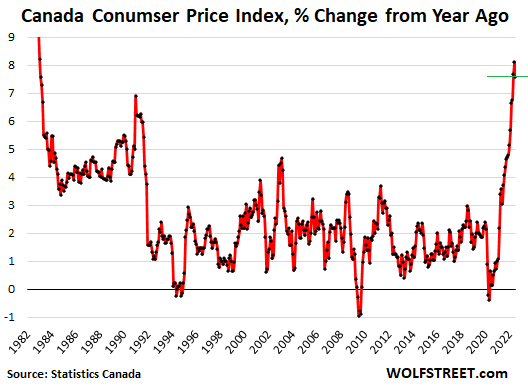 But it downplayed this easing of overall CPI, and instead emphasized the increase in core CPI, driven by price pressures in services, as inflation has broadened:

“The Bank’s core measures of inflation continued to move up, ranging from 5% to 5.5% in July.

“The longer this continues, the greater the risk that elevated inflation becomes entrenched.

Downplayed slowing growth in the economy.

Economic growth slowed to 3.3% in Q2. But the BoC downplayed it: “While this was somewhat weaker than the Bank had projected, indicators of domestic demand were very strong – consumption grew by about 9.5% and business investment was up by close to 12%,” it said.

“The Canadian economy continues to operate in excess demand and labour markets remain tight,” it said.

Brushed off the pull-back in the housing market.

Mortgage rates in Canada have surged. Mortgages are typically variable-rate mortgages or mortgages with rates fixed for 1-5 years that then adjust, and the housing market is much more impacted by changes in short-term rates than the US housing market, where 30-year fixed rate mortgages dominate.

For example, the Canada 1-year Treasury yield has shot from about 0.25% in October last year to 3.75% today: 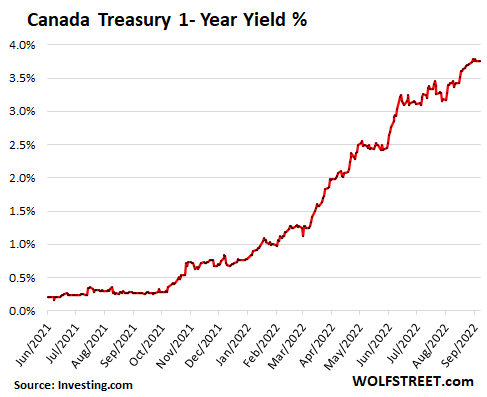 The pull-back in the housing market which is now causing so much hand-wringing in Canada, was “anticipated,” it said, following unsustainable growth during the pandemic.”

Where to go from here?

With the policy rate now at 3.25%, there likely won’t be another 100-basis-point monster hike. That was a July-thing to get everyone’s attention. For today’s meeting, expectations had ranged from 50 basis points to 100 basis points. The BoC hit the middle. A hike between 25 basis points and 75 basis points appear to be on the table for the next meeting in October, which would put it on track to hike its policy rate to 4% or maybe more at the December meeting.