Spent $20 billion more at gas stations, compared to a year ago, due to spiking prices; came out of hide of other retailers. Inflation eats everyone’s lunch.

Retail sales in May, not seasonally adjusted, jumped to $698 billion, the second highest ever, behind only December’s shopping-season splurge, and up 8.2% from the stimulus-miracle bonanza a year ago. 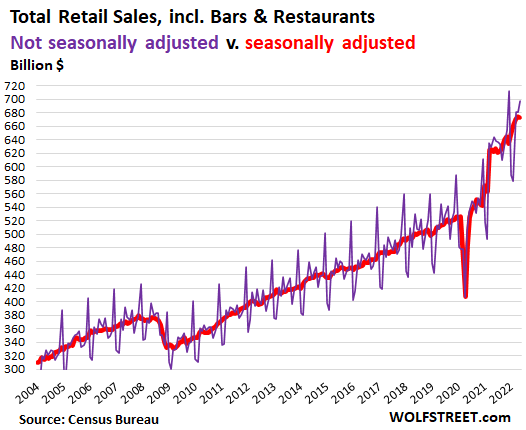 Retail covers only goods. Spending is shifting back to services.

These retail sales cover only sales of goods, not services. For months, consumers have been shifting their spending from goods back to services, particularly discretionary services, such as travels and elective medical treatments, where spending had collapsed during the pandemic. Spending on services is now surging. Services make up about 61% of total consumer spending.

Despite the shift back to services, consumers still spent a huge amount on goods, with year-over-year sales up 8.2% from the already sky-high levels last year.

Price increases are inflating all sales numbers, but to varying degrees. Inflation in goods has been particularly bad, with prices having jumped by the double digits in many categories of goods. Each retailer struggles with their own cost increases, and they’re struggling to pass on those cost increases, as Walmart, Target, and other retailers have disclosed.

The price increases in goods vary to a large degree. The overall headline CPI inflation number of 8.6% simply does not apply. Here are the annual CPI inflation spikes for the biggest categories of goods, per the Bureau of Labor Statistics:

But CPI inflation declined for consumer electronics, which is an issue for Best Buy, other retailers that sell them, and ecommerce retailers:

Consumers are in a Record Foul Mood. 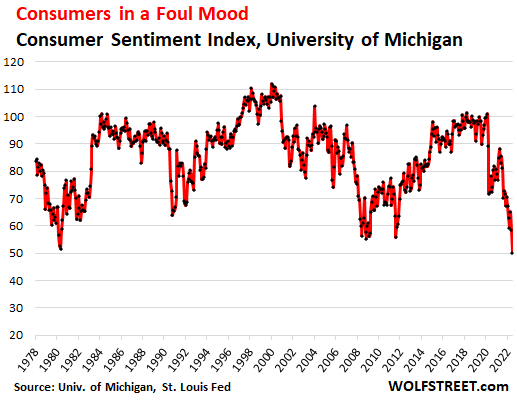 Sales by category of retailer, not adjusted for raging inflation.

Sales at New and Used Vehicle and Parts Dealers, the largest category, fell by 3.5% in May from April, to $126 billion, seasonally adjusted, and were down 3.7% from a year ago, despite raging price increases, attesting to the volume challenges dealers face, with used vehicle deliveries down due to buyers’ resistance to sky-high prices, and new vehicle sales down due to vehicles shortages. The price increases can no longer cover up the decline in unit sales. Note the record stimulus-bonanza a year ago: 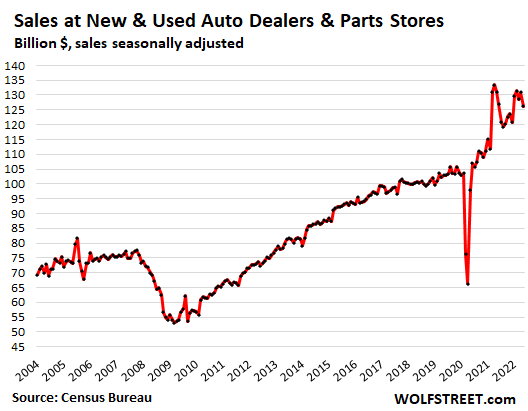 Sales at ecommerce and other “nonstore retailers,” the second largest category, fell 2.3% seasonally adjusted in May from April, to $103 billion, and were up 8.5% year-over-year. But a year ago was still the huge stimulus-bonanza. Compared to May 2019, ecommerce sales were up by 67%.  This includes the ecommerce operations of classic brick-and-mortar retailers: 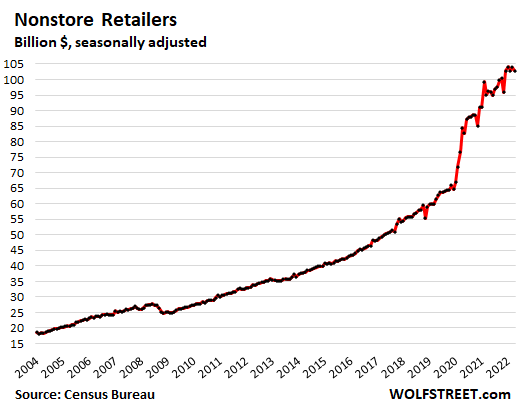 Food and Beverage Stores: Sales rose 1.2% for the month to $78 billion, seasonally adjusted, and were still up by 7.9% year-over-year, which is interesting given the double-digit jump in CPI inflation of “food at home,” which is what these retailers sell, and it shows that people are fighting back where they can, by switching to cheaper items or buying less: 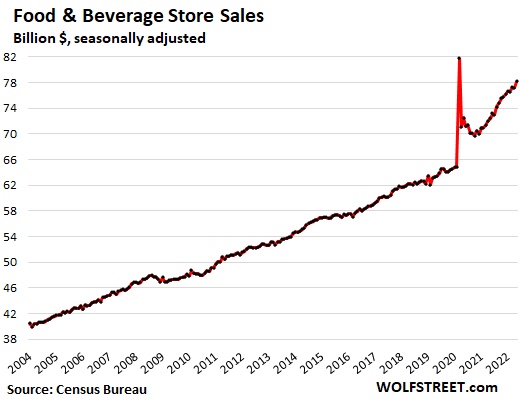 Food services and drinking places: Sales at bars, restaurants, cafes, cafeterias, etc. rose by 0.7% for the month seasonally adjusted, to a record $85 billion, up by 17.5% year-over-year. This year-over-year growth being over two times the annual CPI for “food away from home” (7.4%) suggests that people are going out and are having fun, despite their record foul mood: 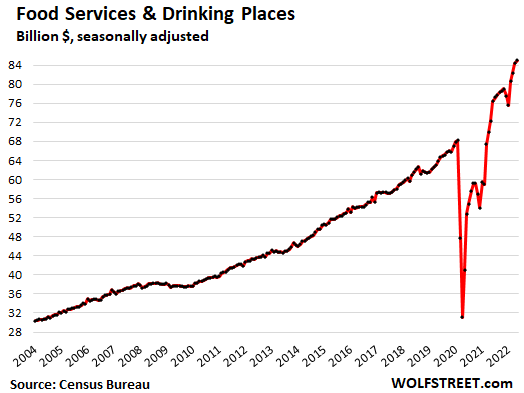 General merchandise stores: Sales were roughly flat for the third month in a row, at $57 billion, seasonally adjusted, and were up 2.8% from the stimulus-miracle bonanza last year. Walmart and Costco are in this category, but not department stores. 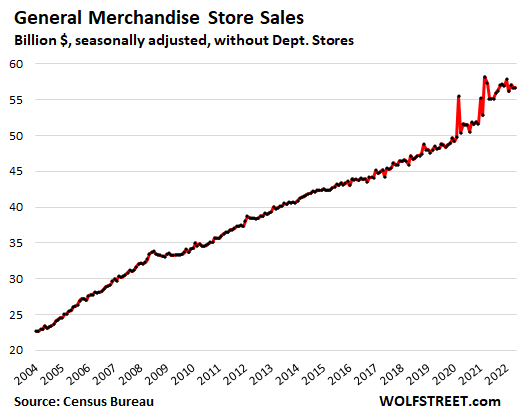 Gas stations: Sales jumped by 4.0% for the month, on spiking gasoline prices, to $66 billion, seasonally adjusted, and by 43% year-over-year. Consumers spent about $20 billion more at gas stations in May compared to May last year, and these $20 billion came out of the hide of other retailers. 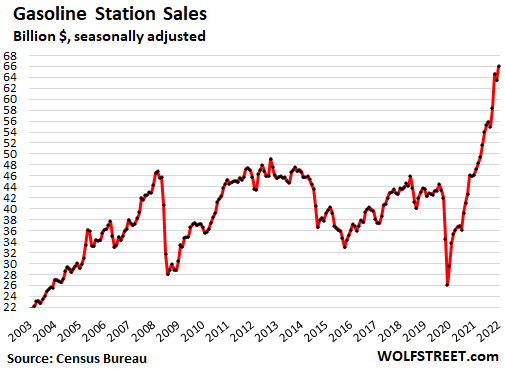 Building materials, garden supply and equipment stores: Sales inched up for the month and rose 6.4% from the stimulus bonanza last year, to $43 billion: 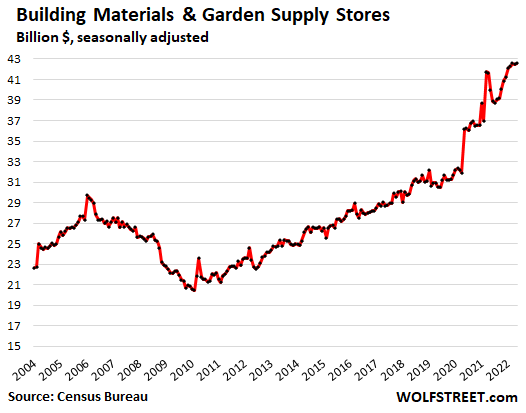 Clothing and accessory stores: Sales were roughly flat for the month and rose 6.1% year-over-year to $26 billion, seasonally adjusted: 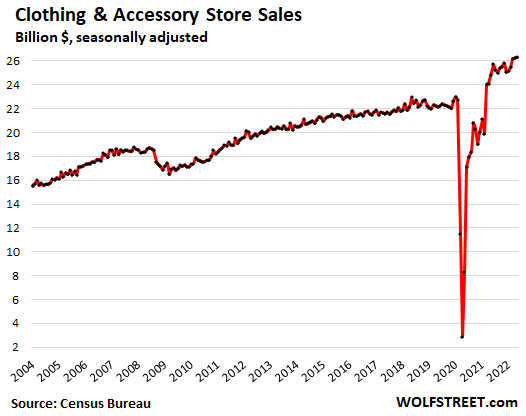 Miscellaneous store retailers (includes cannabis stores): Sales fell by 1.1% for the month to $15.6 billion, but were up 26% from a year ago. Compared to three years ago, sales were up 43%! This category tracks specialty stores, such as arts supplies stores, brewing supplies stores, and cannabis stores – now a hot category in brick-and-mortar retail: 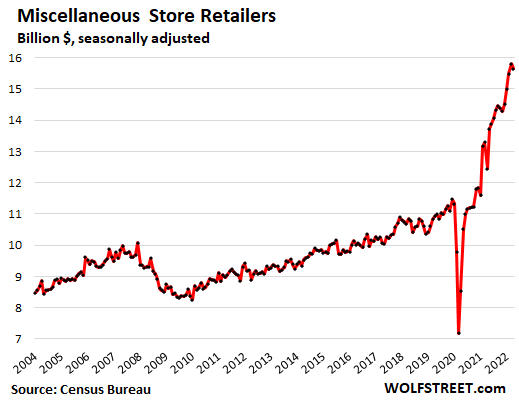 Department stores: sales rose 0.9% for the month, to $11.5 billion, but were up only 0.9% from a year ago. Compared to the peak in the year 2000, sales were down 42%, after thousands of stores closed, and numerous department store chains, from the smallest to the giant, were liquidated in bankruptcy courts. Macy’s too is still closing more stores in 2022. 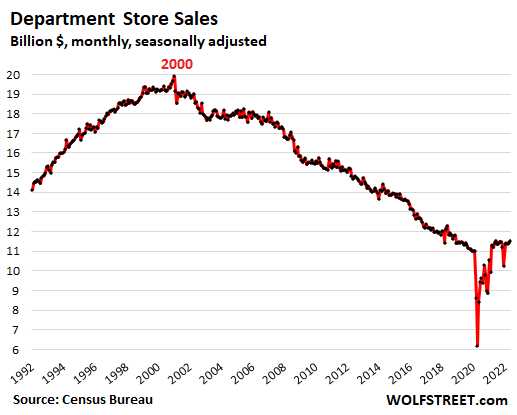 Furniture and home furnishing stores: Sales fell 0.9% for the month, to $12 billion, and were up only 1.9% year-over-year, despite rampant price increases: 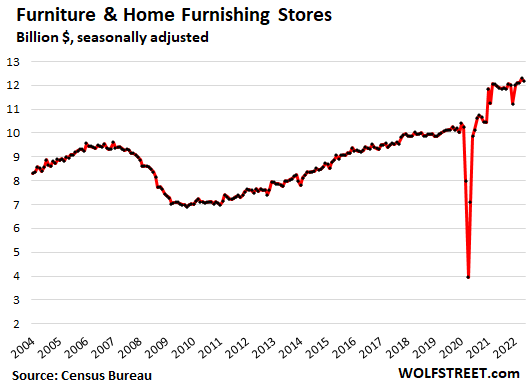 Sporting goods, hobby, book and music stores: Sales rose 0.4% for the month, to $9.1 billion, but were about flat year-over-year: 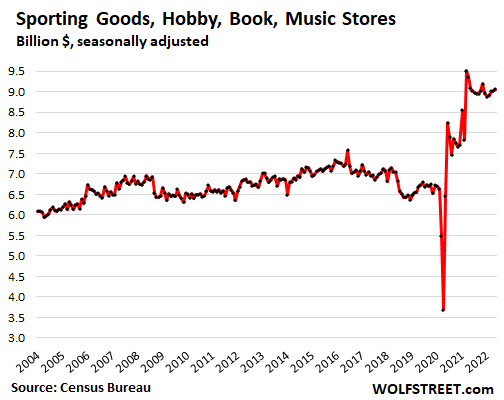 Electronics and appliance stores: Sales fell 1.3% for the month, to $7.7 billion, and were down 4.5% year-over-year. This segment covers only sales in specialty electronics and appliance stores, such as Best Buy or Apple stores, not the ecommerce sales, and not the sales at other retailers, such as Walmart and Home Depot, which are included above. 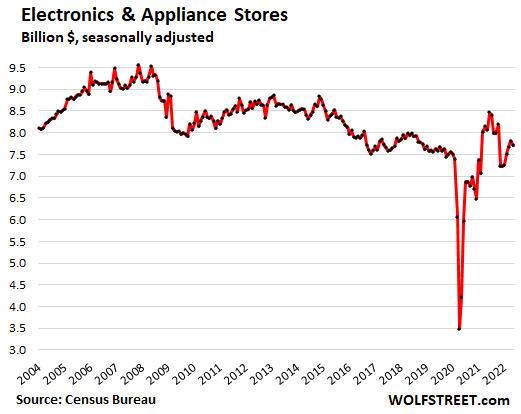 130 comments for “Retail Sales Report, May: In Foulest Mood Ever, Consumers Still Spent Hugely at Retailers, Fighting Inflation where they Can”