The average price of all grades of gasoline spiked by another 25 cents per gallon on Monday, June 6, from Monday last week, and by 39 cents from Monday two weeks ago, to a record $4.98 per gallon, according to the US Energy Department’s EIA late Monday, based on its surveys of gas stations conducted during the day. This was the seventh week in a row of increases. During those seven weeks, gasoline prices spiked by 91 cents. 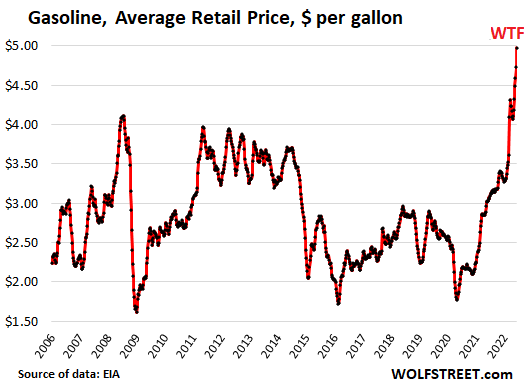 The US West Coast is essentially cut off from the oil producing areas east of the Rockies as there is no crude oil pipeline across the mountains, and oil trains are an expensive way to get the oil across the mountains. The West Coast produces some of its own oil (California is the fourth largest oil producing state in the US), imports some from Alaska, occasionally gets some oil via oil trains, and imports the rest from other countries. But California is also a big exporter of gasoline and diesel, mostly to Latin America. How can gasoline prices be so high for locals when refineries export gasoline into competitive global markets?

Every governor of California, including Governor Gavin Newsom in 2019, asked for a probe into gasoline price fixing in the state, because the industry is run by an oligopoly, and it’s pretty clear what is happening here, but those efforts all get squashed, and nothing – I mean zero – ever comes of it.

So here we go, the average price of a gallon of regular in some key states on Monday, June 6:

Of the big cities that the EIA details separately, San Francisco nails the top spot with an average price of regular of $6.34 on June 6, followed by Los Angeles with regular at $6.13. By contrast, in Houston, the oil capital of the US, if not the world, the average gallon of regular cost $4.57 on Monday.

Gasoline futures also rose to a new record on Monday intraday, kissing $4.25 briefly before backing off a little. The weekly chart – each bar represents one week’s price movements – shows just how spiky this product has gotten (chart via Investing.com): 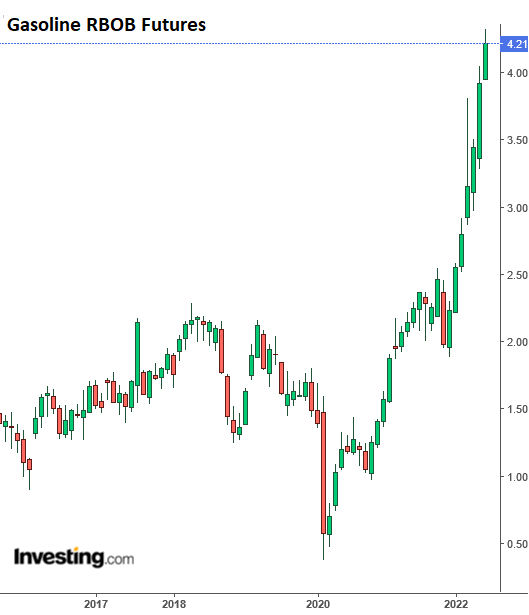 The average retail price of No. 2 highway diesel rose to a record $5.70, up by 74% from a year ago. Most consumers don’t pay for diesel directly, but nearly all goods that consumers buy sooner or later end up on a truck, and shipping costs sooner or later – though not in lockstep – get passed on and make their way into retail prices. 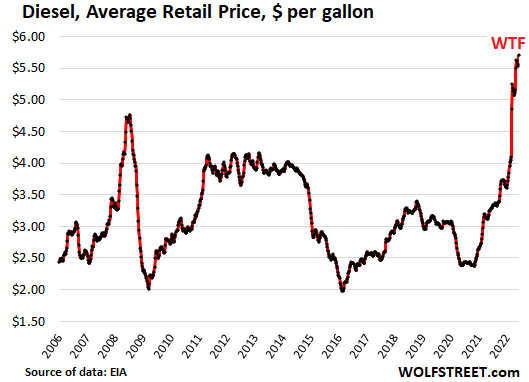 Crude oil WTI futures hit $120 a barrel during the day and are now around $119, having now clearly broken out of their trading range following the spike-and-drop in early March, but well below the peak of the spike in July 2008 of $150 a barrel. 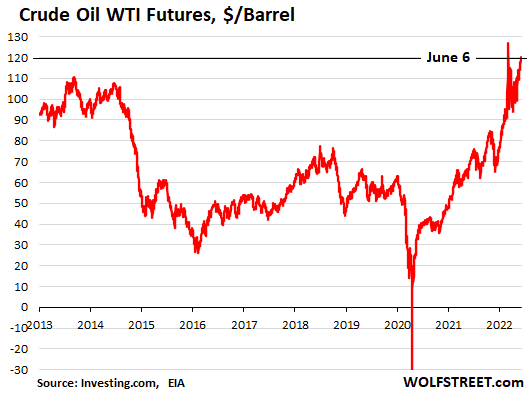 A little demand destruction for gasoline has occurred, but obviously not enough to make a dent into the price spikes. The EIA reported — based on barrels supplied by refiners, blenders, etc., and not by retail sales at gas stations — that gasoline consumption, at 8.88 million barrels per day (red line) through May 27 fell by 3.1% from the same period in 2021, and by 6.2% from the same period in 2019: 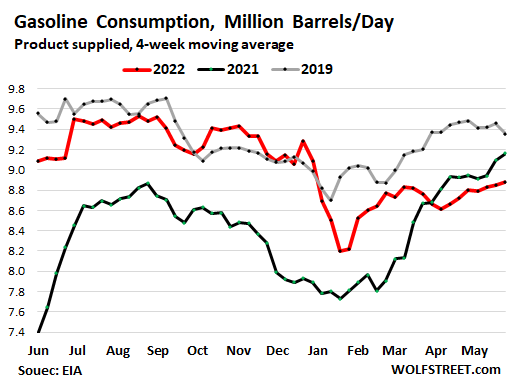 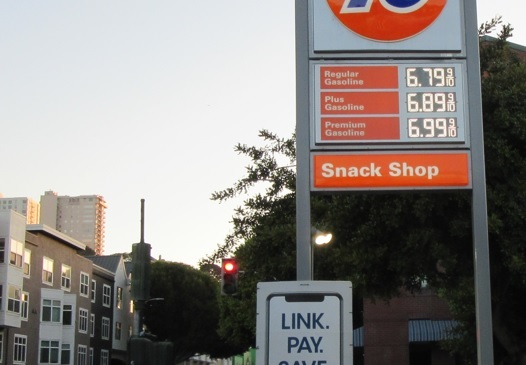 And not to be left behind, Chicago, with an average price of regular of $5.58 per EIA, was caught by Wolf Street commenter “Rusty Trawler” on Monday June 6 with its own gas station from heck in Downtown, where regular was $6.65 and “ultimate” was of $7.37: 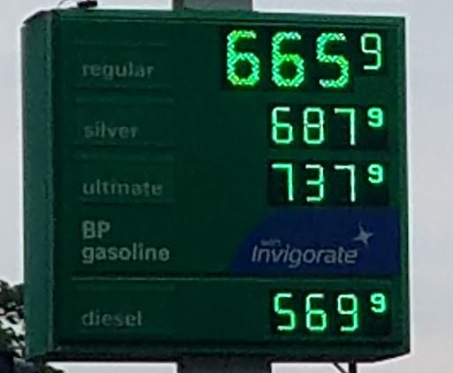