Make that $6.55 for regular at my San Francisco gas station from heck.

Over the past seven days, the average price of all grades of gasoline spiked by another 16 cents to a record $4.49 per gallon on Monday, May 16, the fourth week in a row of increases, and was up 48.3% from a year ago, according to the US Energy Department’s EIA late Monday, based on its surveys of gas stations conducted during the day. This comes just in time for summer driving season. 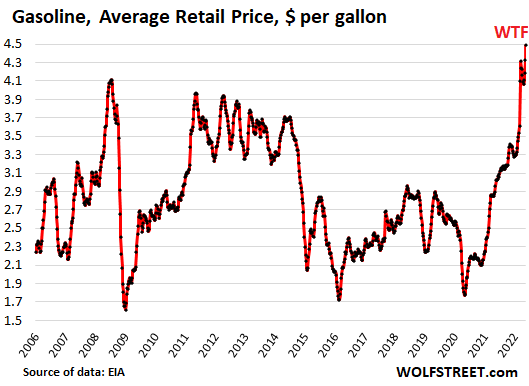 Not good for CPI inflation: In the still red-hot CPI for April, released last week, there was some slight cooling from March, and one of the contributors to that slight cooling was the CPI for gasoline which fell 6.1% in April from March. Well, OK, that was then and this is now.

Since the end of April, the price of gasoline has jumped by 9.3%. So, gasoline will provide some additional and totally unneeded oomph for the inflation rate in May.

Gasoline futures also rose to new record on Monday, closing above $4 for the first time, and were up by 16% from the end of April (chart via Investing.com): 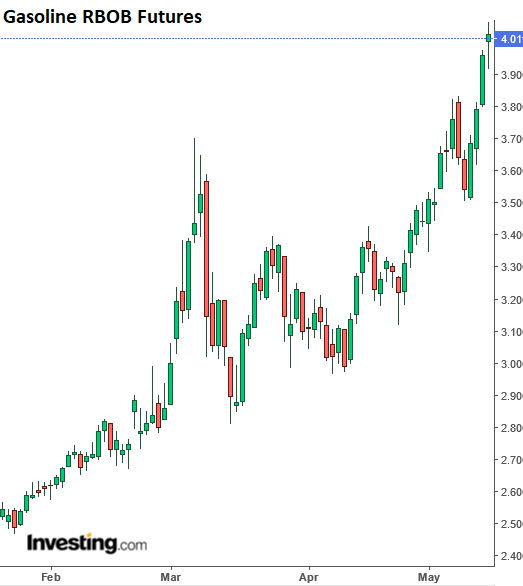 The average price of No. 2 highway diesel at the pump, after spiking by 12 cents in the prior week, dipped by a penny on Monday to $5.61 per gallon, the second highest ever, but on the long-term chart it seems the same as in the prior week. Year-over-year, the price of diesel has spiked by 73%!

Consumers get to pay for diesel prices sooner or later via higher costs of the goods they’re buying since nearly all goods are sooner or later transported by truck for at least part of the way, and fuel price increases are eventually passed on. 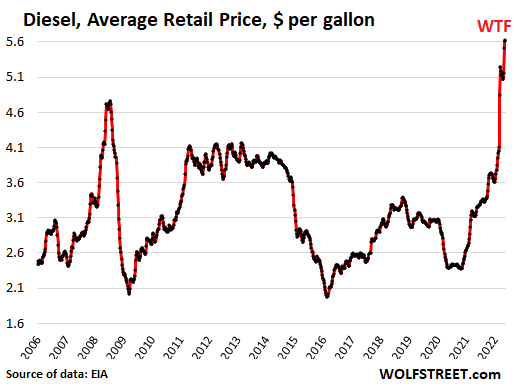 Note the chaos in April 2020, when WTI futures dropped to minus $37 a barrel for a moment, in a market that had gone completely haywire. 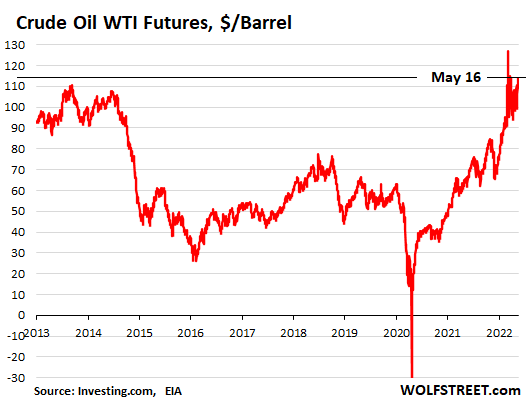 For your amusement, here is my San Francisco tourist-trap gas station from heck this evening, where the price of regular has now reached the proud record of $6.55 a gallon, while, per EIA, the average price in all of San Francisco has risen to $5.91, and in all of California to  $5.79. Even in Colorado, the cheapest of the major states, the average price of regular rose above $4 for the first time. 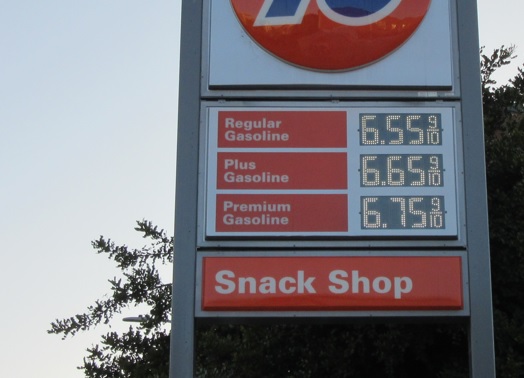 194 comments for “Gasoline Spikes to Record $4.49, Just in Time for Summer Driving Season. Crude Oil Jumps. Not going to Help CPI in May”