Most Reckless Fed Ever on the move finally, biggest rate hike since 2000, QT next, but too little too late.

“The Committee is highly attentive to inflation risks,” the statement from the Fed’s policy committee said today, adding to its inflation concerns the lockdowns in China that “are likely to exacerbate supply chain disruptions.”

Nowhere in the statement does the Fed explain that the raging inflation followed $4.6 trillion in money-printing in two years that unleashed all kinds of craziness, including in the markets. But that party is over.

“Soft or softish landing” for the economy. Markets on their own.

Tightening might be “unpleasant,” Fed Chair Jerome Powell said, but labor markets are very strong, and the balance sheets of consumers and businesses are solid, and they can handle higher rates, and “we have a good chance to have a soft or softish landing,” he said. “The economy is strong and is well-positioned to handle tighter monetary policy,” he said.

He was speaking of the economy – employment, GDP, etc. – and not the financial markets, which are on their own and can figure out their own landing amid higher rates and QT.

Fed hiked all policy rates by 50 basis points, most hawkish move since 2000:

How and when Quantitative Tightening (QT) kicks off.

QT starts on June 1. The whole thing is going to take place in a “predictable manner” by letting maturing securities roll off the balance sheet, subject to “caps.”

During the phase-in period in June, July, and August, the Fed’s securities holdings will drop by $47.5 billion per month: $30 billion in Treasuries and $17.5 billion in MBS. Reductions will come from maturing securities being redeemed, and from pass-through principal payments for MBS.

The full-speed period begins in September when the Fed’s securities holdings will be allowed to drop by $95 billion a month, with the “caps” set for Treasury securities at $60 billion and for MBS at $35 billion.

There were no surprises. This was largely spelled out in the minutes of the last meeting. And this is how this Fed will continue to operate: everything will be telegraphed well in advance, and there will be no surprises.

During the press conference, Powell said that a 75-basis-point hike “isn’t something the FOMC is actively considering,” but “there is a broad sense on the committee that additional 50 basis point increases should be on the table at the next couple of meetings.”

We may get the “softish landing” and keep the inflation.

Powell was confident that these and more rate hikes, up to “neutral,” whatever rate that might be, would bring down inflation without causing a recession – the “soft or softish landing.”

He might be right about the softish landing: The rate hike path lined out to “neutral” might not cause a recession, given the huge excesses in the economy, the huge demand that has created shortages of all kinds, including labor shortages.

If the Fed considers “neutral” 3%, and inflation is 8.5%, then this neutral is still stimulative, and it will likely not cause a recession though it might take some of the excesses out of the financial markets and lower inflation pressures somewhat, without actually getting inflation back down. So, look mom, no recession!

Yeah but… inflation will then still be raging. This type of inflation cannot be brought down by short-term policy rates of 3%. So we may get the “softish landing” but keep the inflation.

Monetary policy attempts to impact demand via the mechanism of interest rates, particularly long-term interest rates that would increase the costs of borrowing for consumers and businesses.

Higher costs of borrowing will make it more difficult for some consumers and businesses to borrow, or too costly, and they might not buy what they could have otherwise bought, which would reduce sales for companies – some might feel it more than others.

Credit tightening also tends to push zombie companies, that were held upright by yield chasing investors, off the cliff into default and a debt restructuring, which could get rough for stockholders who usually end up with nothing or nearly nothing in a debt restructuring.

And the Fed knows that falling asset prices are likely to lower inflationary pressures because asset holders who’re getting slapped around in this environment will eventually spend less and might forgo that $100,000 pickup truck or home remodel job, which would take some pressure off the shortages.

During the last 90 minutes of trading, after Powell took the 75-basis-point hike at the next meeting took off the table, stocks spiked by around 3% amid panic-buying by speculators trying to cover their short positions.

Still the Most Reckless Fed Ever, pouring fuel on the fire.

But CPI inflation is now 8.54%, and the “real” EFFR is now a negative 7.67%, which represents the amount by which the Fed has fallen behind, and it’s unprecedented. OK, lots of stuff is “unprecedented” in our crazy times, but this sticks out, and it means that the Fed continues to pour fuel on the raging inflation fire, which makes it the Most Reckless Fed Ever. 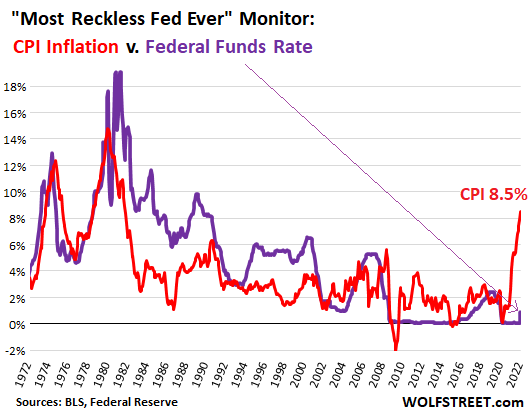 364 comments for “Powell Confident in “Softish Landing” for the Economy, But We May Keep Inflation. Markets Can Figure Out their Own Landing”