This morning, Uber reported a net loss of $5.93 billion for Q1, and its shares initially tanked 11%, no biggie compared to the 32% dive that Lyft shares are currently undergoing following its earnings report and outlook last night.

In its earnings report, Uber disclosed $5.5 billion in losses on its stakes in four companies that recently went public via SPAC or IPO, and whose shares have gotten outright thackamuffled. These are the losses Uber reported today on its holdings of these four now infamous stocks that have been beautifying my column, Imploded Stocks:

Uber ended up with shares of Grab, the SoftBank-backed ride-hailing and delivery app in Southeast Asia, when Uber sold its own rideshare and delivery businesses in Southeast Asia to Grab. The deal was announced in March 2018, when both companies were still privately owned. In exchange, Uber got a 27.5% stake in Grab.

“The deal starts to make sense when you consider that both companies share common investors – SoftBank and Didi – and that waging an expensive subsidies war in what is currently a loss-making hurts both sides,” Tech Crunch said at the time.

Grab, headquartered in Singapore, went public via merger with a SPAC in the US. The deal was announced in April 2021 and was approved by SPAC shareholders on November 30, 2021. The deal valued Grab at $40 billion, the biggest SPAC deal ever.

Grab shares [GRAB] have collapsed by 82% from their high in November 2021, just before the SPAC merger was finalized (data via Investing.com): 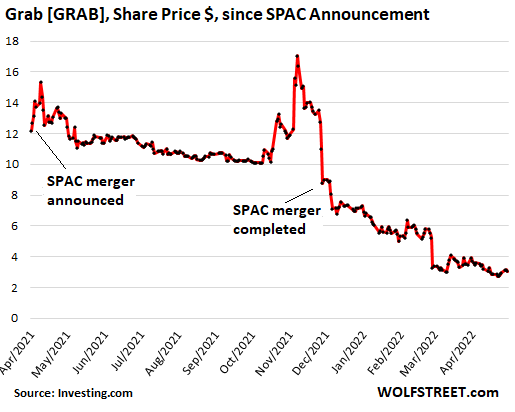 Uber ended up with shares of Aurora Innovation when Uber sold its own misbegotten self-driving unit, Advanced Technologies Group, to a startup, Aurora Innovation in return for a 26% state in Aurora. The startup was backed by Hyundai, Amazon, and a number of VC firms, including Greylock and Sequoia. At the time, the startup was valued at $10 billion, a person familiar with the terms of the deal told CNBC to generate hype.

Aurora Innovation went public via merger with a SPAC in November 2021. After the SPAC deal was announced, shares spiked to $17.77 on November 19 and have since collapsed. Today, shares trade at $4.00, down 77% from the November high (data via YCharts): 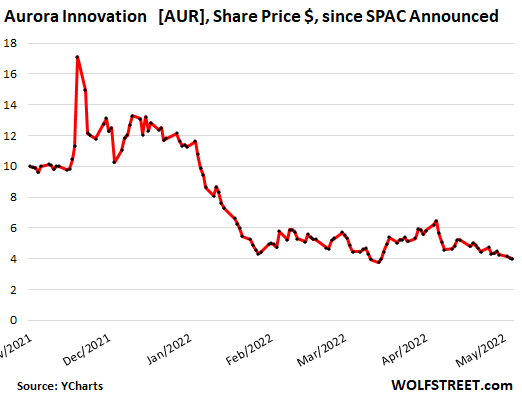 Uber ended up with shares of Didi, the Chinese ride-hailing and delivery startup, when Uber sold its Chinese business to Didi in 2016, in exchange for a 12% stake in Didi, making it the second largest shareholder, behind SoftBank.

Didi went public via IPO in the US at the end of June 2021, despite objections of Chinese authorities. As soon as the ADR started trading on the NYSE, it spiked and hit $18.01, before the collapse began. The threat of having to delist the ADR has hung over the ADR from the beginning. In March this year, Didi’s Hong Kong listing got scuttled.

Didi now disclosed that it has been investigated by the SEC about its IPO. “We cannot predict the timing, outcome or consequences of such an investigation,” it said. OK. Its shares may be suspended in addition to getting delisted. So good luck.

For Goldman Sachs, the lead underwriter in the IPO, the IPO was a masterful creature designed to generate fees and wipe out investors. 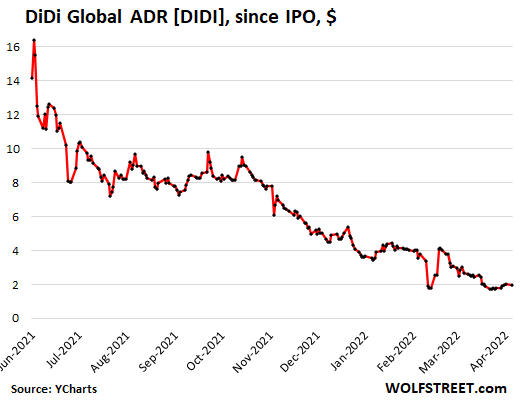 Uber ended up with shares of Zomato, a food delivery startup in India, when Uber sold its food delivery business in India to Zomato in March 2020. In July 2021, Zomato went public at 76 rupees a share, and its shares [ZOMT] started trading on the NSE in India. The shares surged initially and on November 14 hit a high of 160 rupees, and then spiraled down. Today, the shares dropped another 7.3%, to a new low of 64.45 rupees, down 60% from the November high. 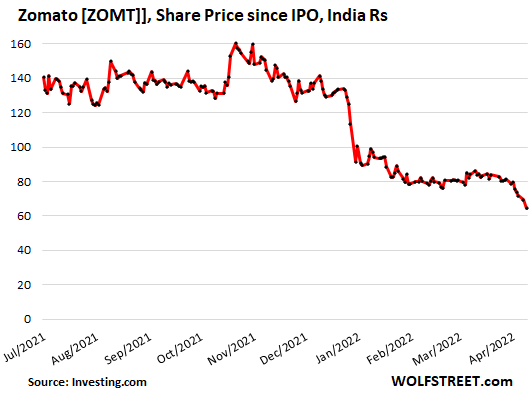