As the market continues to come unglued stock by stock.

On today’s menu of imploded stocks are two extra-specials:

SoftBank-backed Grab, the largest ride-hailing and food-delivery app in Southeast Asia, is headquartered in Singapore and went public via merger with a SPAC in the US and is trading on the Nasdaq.

The SPAC merger was announced in April 2021 and was approved by SPAC shareholders on November 30, 2021. The deal valued the company at $40 billion, making it the biggest SPAC deal ever.

The SPAC’s shares, which had been trading on the Nasdaq before the merger under a different ticker, started to trade under [GRAB] on December 2, 2021.

Today, Grab reported earnings for the first time as a publicly traded company, namely a colossal loss of $1.06 billion for Q4, nearly double the loss from a year ago. For the whole year, Grab lost an inexplicable $3.45 billion, up from a loss of $2.61 billion in the prior year.

How can you lose $6.1 billion in two years by delivering food and driving people around? That was a rhetorical question.

Revenues plunged by 44% to $122 million in Q4; and for the full year by 44% to $675 million. As you’d expect, there’s a big yada-yada-yada story to make this fiasco sound better, including that the company spent a huge amount on incentives, discounts, and promotions to get consumers to use its services and to get drivers to do the work. These incentives are deducted from revenues.

Upon the news of exploding losses, shares crashed 37% today and are down by 81% from their high on November 12, 2021, just before the SPAC merger was finalized. The boom in SPACs that started in 2020 has, as everyone knew it would, turned into one of the great scams (data via YCharts): 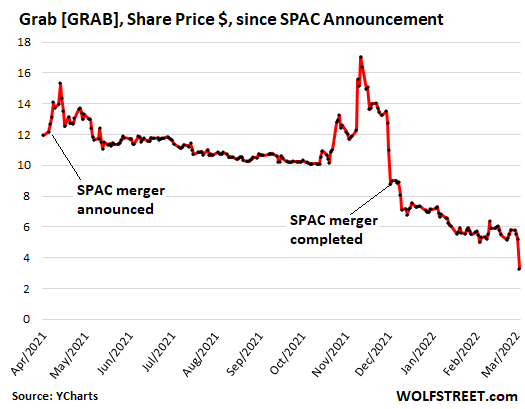 Dating app Bumble [BMBL] went public via IPO in February 2021 amid enormous hoopla. The IPO price was set at $43 a share. The first trade out the gate on February 11 was at $76 a share. Shares rose to $79.60 intraday and closed at $70.31. On the second day of trading, February 12, shares spiked to a high of $84.80 intraday, giving it a market cap approaching $10 billion. And that was it. Shares have dropped ever since.

Today, shares plunged another 15.7% during regular trading and 2.5% afterhours to $19.00. Shares are now down 78% from the high on the day after the IPO. Bumble didn’t even report earnings.

There may now be some hand-wringing and fretting among trading-app jockeys and algos that Bumble’s exposure to Russia and the Ukraine – it’s not huge: J.P. Morgan estimated that they may account for 3% to 4% of Bumble’s revenue – may cause the company to issue potentially reduced guidance when it reports earnings on March 8.

This is the kind of chart where the crazy stock market hype over the past two years comes home to roost: 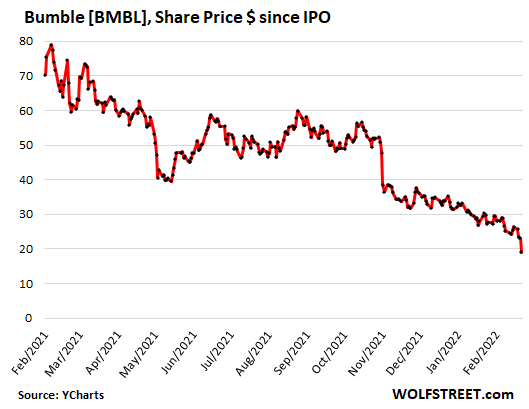