Belgium is known for its surprises. For example, it got by amazingly well for a couple of years without a national government, and without breaking apart, to the endless chagrin of a lot of people. And it has a great variety of delicious beers, which I amply tested during the three years I was there. But now, that tiny country with a tiny economy is suddenly piling up a mountain of US Treasuries.

In March, according to new data from the US Treasury Department, it added another $40.2 billion to its existing mountain of Treasuries, now at the dizzying height of $381.4 billion, or 79% of GDP!

It put the country in third place, behind the second and third largest economies in the world, export machine China ($1.27 trillion) and former export machine, now money-printer Japan ($1.20 trillion). From August last year, Treasury holdings in Belgium have ballooned by 129%! 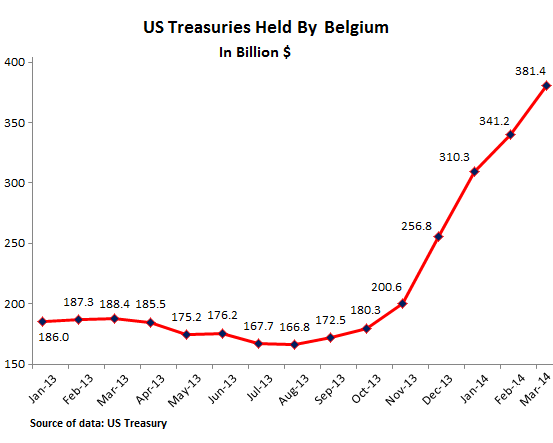 What the heck is going on?

Booming dollar-denominated exports of abbey beers and stinky cheeses and other products? Sure, they might have edged up a notch. But their impact on Treasury holdings, if any, would be minuscule. Belgium is not a country where something suddenly takes off. Compromises have to be negotiated according to the rules of Belgian finesse. People go on long vacations, and things come to a halt. The formidable bureaucracy – which didn’t go away just because they didn’t have a national government – has to be bored through with superhuman effort, as I found out. No, this surge in Treasuries isn’t caused by anything in the economy.

Leaves another option: Someone is moving billions of Treasuries around. There have been some mind-boggling movements. The Fed’s leger of Foreign Official Accounts hit a record of $3.02 trillion on December 18. Up over 150% in six years. Yup, the deficits binge of the Federal government, funded in part by foreign entities. But then it fell, and in the week of March 5, it plunged by a panicky $104.5 billion. At the time, the Ukrainian situation was elegantly turning into a fiasco. Western governments bandied threats of sanctions against Russia. Then some of those Treasuries rematerialized, only to de-materialize once again. This is what the weekly trail of sudden volatility looks like: 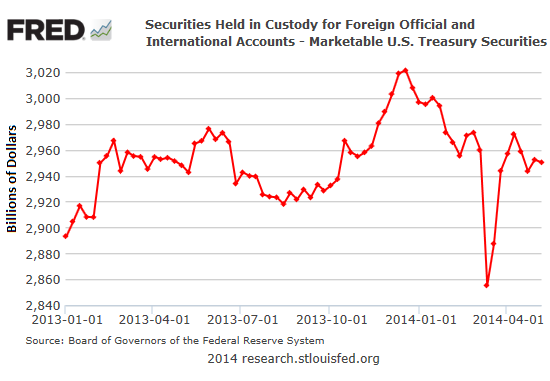 We were left to our own devices, trying to cut through official fog and speculating about this pile of Treasuries. But today, Treasury International Capital (TIC) System published the March data. Now we know – instead of just speculating – who was panicking: Russia.

Treasuries held by Russia have plunged by nearly $50 billion between October and March. One third. Over half of the plunge came in March ($26 billion) when the sanction spiral was launched. TIC Data for April won’t be available until June. Given what’s going on with Treasuries held by foreign entities (above chart), Russia’s holdings in April are likely to have continued their plunge. Is Russia – worried about having its US Treasuries frozen – dumping them until they’re down to zero? 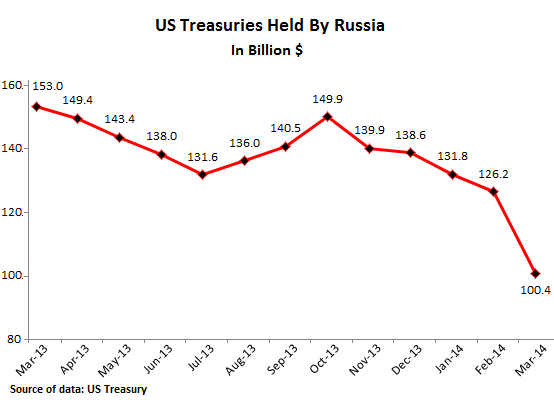 Clearly, President Vladimir Putin has had it with the US.

But why is Russia’s dumping of Treasuries not taking down the Treasury market? Treasuries have been strong over the period. So it seems Russia is actually not dumping them, or at least not that fast. It’s just moving them out of reach of the long arm of the US government, and it’s sending them to safer shores. Namely Belgium.

Belgium is a major financial center and transit point for all kinds of assets, via a massive outfit, Euroclear, headquartered in Brussels. It holds $33 trillion in assets, as it says, for over 2,000 global and local custodians, broker dealers, central banks, commercial and investment banks, investment managers, and supranational organizations in more than 90 countries. Every year, it settles over $780 trillion (with a “T”) in securities transactions for its clients. Or 1,177 times the GDP of Belgium (which makes you wonder about the Big Bang if Euroclear ever sneezes).

Moving Russia’s holdings of US Treasuries is no big deal for Euroclear. It would simply become the custodian of Russia’s holdings; so officially, they’d be held by Belgium. Then Euroclear would mingle them with other Treasuries and transfer the whole schmear under its own name back to the Fed. Being officially held by Belgium, they’d be beyond the reach of the American government. Neither Congress nor the Administration, which have been wildly but ineffectually flailing their arms about imposing more sanctions, could credibly threaten to freeze these Treasuries. And Putin is grinning off-screen.