They sure made hay while the sun was shining.

One of Goldman Sachs’ many splendid 2021 creatures, the American Depositary Receipt of Chinese ride-hailing company DiDi Global plunged 18% today, to $2.01. The ADR is now down 89% from its peak right after its IPO at the end of June last year, of which Goldman Sachs was the lead underwriter (data via YCharts): 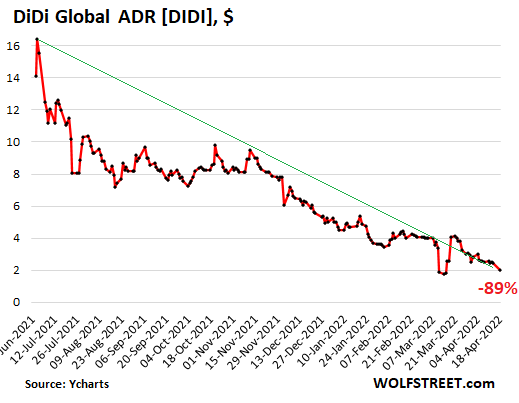 Didi’s effort to get listed in Hong Kong was scuttled in March, after the Cyberspace Administration of China informed DiDi that its proposals to prevent security and data leaks had fallen short, according to Bloomberg at the time.

The issue that DiDi’s American Depositary Shares might get delisted cropped up shortly after the IPO. Turned out, the IPO angered Chinese authorities and cleaned out US investors, and so this isn’t news to stock jockeys trying to buy the dip along the way, only to also get cleaned out. But today’s delisting details, plunging revenues, and doubling losses nevertheless rattled nerves further.

Meanwhile, the good folks at Goldman Sachs are happy: The firm extracted fees from the IPO, and it may have profited from the overallotment options during the initial pop, and as we now know, it paid its good folks record bonuses for 2021.

Goldman Sachs wasn’t the only underwriter of the DiDi IPO – there were a whole slew of them – but it was the lead underwriter, the “lead left bookrunner,” that has the lion’s share of responsibility and gets the lion’s shares of the fees. In DiDi’s IPO, the second and third joint bookrunners were Morgan Stanley and J.P. Morgan Securities. The other underwriters included a slew of firms around the world, in Hong Kong, China, Japan, New Zealand, etc. Everyone was trying to make a killing on it.

In addition to the fees, underwriters also get the option to buy the stock at the IPO price and sell it during the pop after the IPO, thereby being one of the big sellers that helped knock down those shares after the pop.

The benefits extracted by the underwriters from IPOs can be very large, especially if there is a big “pop” early on.

Here are a few of the creatures that went public in 2021 where Goldman Sachs was the lead left bookrunner and that have now imploded and that are included in my Imploded Stocks. Shown are the current share price and the decline from peak:

Coinbase, a crypto exchange, didn’t go public via an IPO but via a direct listing in April 2021, so there were no “underwriters.” Shares just started trading rather than being sold at the IPO price before they start trading. But Goldman Sachs acted as the lead financial advisor, followed by J.P. Morgan, Allen & Co., and Citigroup.

Squarespace [SQSP], which is into website hosting that included the predecessor site of WOLF STREET, was another direct listing where Goldman Sachs was the lead financial advisor. It started trading in May 2021. Shares hit the high in June, and have since plunged by 65% to $22.58.

But they’re all the same on Wall Street.

2021 was a huge record year, with 396 IPOs and 613 SPACs, raising a combined $316 billion from eagerly credulous hype-addicted investors, and generating billions of dollars in fees and profits from selling during the initial “pop” of the shares.

I’m not picking on Goldman Sachs alone. Goldman Sachs just happens to have been the #1 most prolific underwriter of classic IPOs (not SPACs) in 2021, with 147 IPOs in the US, valued at $16.2 billion, according to Dealogic. This includes IPOs where Goldman Sachs was not the lead underwriter.

SPACs collapsed even more spectacularly than IPOs. But Goldman Sachs was only #2 with 62 SPAC listings, behind #1 Citibank with 108 SPACs, according to Dealogic. Cantor Fitzgerald was #3 with 60 SPAC listings. Next were Credit Suisse, Morgan Stanley, and others.

Goldman Sachs, when it announced Q4 earnings three months ago, disclosed that it set aside $17.7 billion for employee compensation expenses in 2021, up by 33% from 2020, for an average of $404,000 per employee. Still doing “god’s work,” as then-CEO Lloyd Blankfein said so eloquently in 2009.

For top-performing investment bankers at Goldman Sachs – including those responsible for imploded IPOs and SPACs and similar “god’s work” – the annual bonus pool increased by 40% to 50%, according to sources cited by Reuters.

Overall Wall Street compensation for 2021 hit a record of $257,500 per employee, up by 20% from a year ago, due to record profits, according to a report by the New York State Comptroller Thomas P. DiNapoli.

But Goldman Sachs was in the news last week with an unpleasant turn of events: its Q1 earnings report, where it disclosed that in Q1 this year, investment banking revenue – including the fees from IPOs and SPACs – plunged by 36% to $2.4 billion. And that asset management revenue collapsed by 88%, “primarily reflecting net losses in Equity investments and significantly lower net revenues in Lending and debt investments,” it said. Other Wall Street banks had similar confessions, and their shares sank. So this jig is up for now. But they sure made hay while the sun was shining.

110 comments for “The 2021 Creatures of Goldman Sachs: its IPOs, SPACs, Direct Listings Are Imploding after Bonuses Spiked to a Record”