Ugly Day. But I’m more and more amazed how Microsoft’s CEO picked the very peak to dump half his shares last November.

The Nasdaq fell 2.6% today and is now again down over 20% from its peak last November. A lot of stocks got hammered today. But it was the giants that stole the spotlight. They’re now letting go.

Hundreds of stocks have plunged since February 2021, one after the other, the most-hyped stocks taken out the back and shot, down 70%, 80%, and even over 90%, often just months after they started trading as a public company. I’ve document some of them in my Imploded Stocks column.

For much of the time, the giant stocks kept the overall stock-market indices from totally tanking despite the mayhem beneath the surface. But now the giants are letting go too. Meta already fell apart over the past few months. Amazon used a massive bout of financial engineering to stem the fall, and that only worked briefly. And today, Alphabet let go.

Alphabet [GOOG] broke today. It dropped 4.3% today in regular hours trading, and another 0.9% afterhours to $2,390, down by $108, and leaving behind the resistance from which it successfully bounced off three times.

The stock is now back where it had first been on April 29, 2021, and is on the verge of turning negative year-over-year. Alphabet’s shares have now dropped 21.4% from the 52-week high on February 2 this year (data via YCharts): 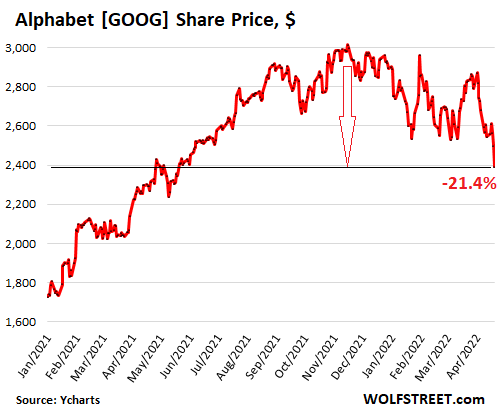 Meta, the good old Facebook that tried to fix its problems by changing its pooh-poohed name, to no avail, has been the trailblazer among the giants for reasons of its own. Its shares [FB] fell 2.1% today and have now plunged 52% from their peak on September 1, 2021 ($384).

At this pace, I will soon have to add Meta to my Imploded Stocks, just like was I forced to do with former FANGMAN component Netflix, which collapsed by 69% from its peak last November.

Meta edged through the resistance level today that was established in the second week of March and set a new 52-week closing low, having now dropped to levels it first crossed in April 2019. This is a horrible looking chart (data via YCharts): 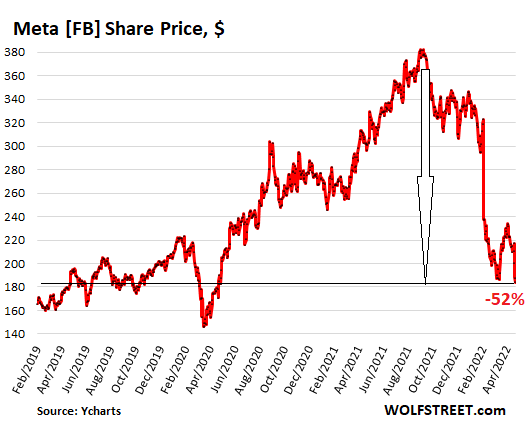 Microsoft is letting go too. The shares [MSFT] fell 2.4% today to $274.03 and some more afterhours. They edged through the closing low of March 7 and closed at the lowest point since July 1, 2021. Since their peak on November 22, shares have since plunged 21.6%.

What remains an amazing all-time WTF-trade is how CEO Satya Nadella dumped half of his Microsoft shares right at the peak, almost to the minute on November 22 and 23. I mean, not many people are better at picking the very tippy-top to dump half their stake, worth $285 million, right there (data via YCharts). 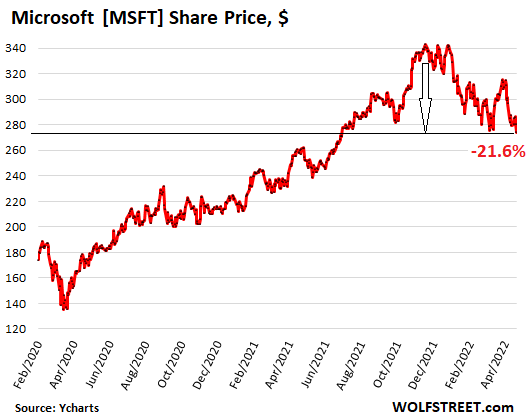 Amazon tried all the tricks of financial engineering in early March to stem the slide of its shares with its announcement of a 20-for-1 stock split and a huge share buyback program for which it is borrowing tons of money. And it worked, briefly. Shares bounced but have since given up nearly the entire financial-engineering bounce. 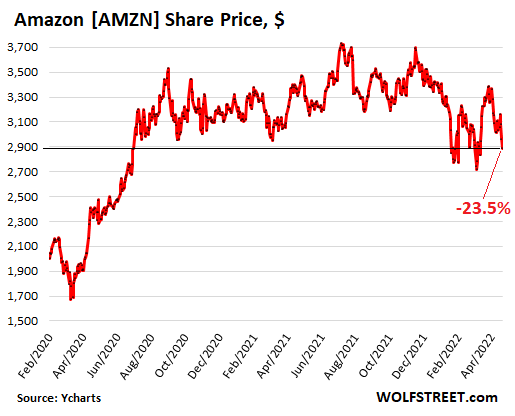 Tesla [TSLA], despite the mayhem in the markets today, barely budged, ticking down 0.4% to $1,005, and losing another $5 in afterhours trading. Since its peak on November 4, the shares have dropped 19.4% but remain well above the March lows.

Tesla is of course not an ordinary company. Its CEO walks on water. And over the past two years, the share price has multiplied by 10, a miracle of its own kind, the most valuable automaker by far in the world, despite its tiny market share. And Tesla P/E ratio of 135 is another miracle for an automaker, but then no other CEO walks on water. 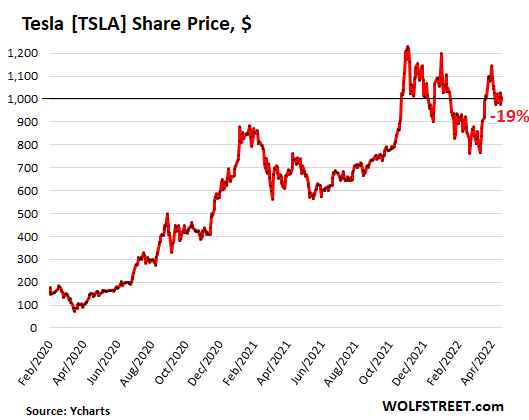 The share price is still well above its recent low of early March. And given Apple’s huge size, it single-handedly has been slowing the decline of the overall indices. So when Apple lets go too, it will cause some additional, let’s say, ripples. 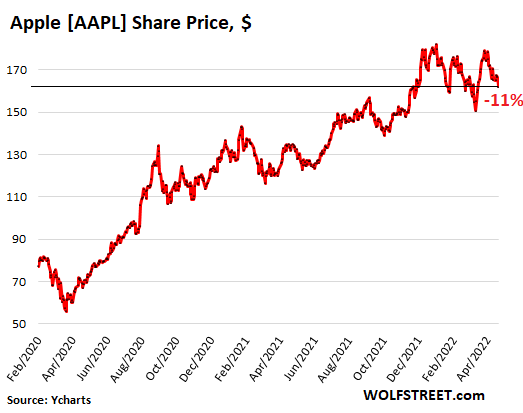 269 comments for “Now Alphabet Breaks, Microsoft too, Meta Already in Free-Fall: One by one, the Giant Stocks that Held Up the Market Let Go”