Shares collapsed by 68% since November. $205 billion evaporated. FANGMA without the N.

The final N in the erstwhile glorious FANGMAN – Facebook, Amazon, Nvidia, Google, Microsoft, Apple, Netflix – has now earned itself a spot on my growing “Imploded Stocks” that I discuss periodically for the amusement of those who’ve been through this during the dotcom bust and know viscerally how a stock market bubble ends.

Shares of Netflix [NFLX] plunged 35% today, following its dismal quarterly earnings report last night, and closed at $226.19. Three months ago, after a dismal earnings report, shares had plunged 24%. Another earnings report is coming up in three months. Since their high on November 17, 2021, in just those five months, shares have already collapsed by 68%, and are now back to where they’d first been in January 2018. The stock is now on the verge disproving the WOLF STREET dictum, “Nothing Goes to Heck in a Straight Line”: 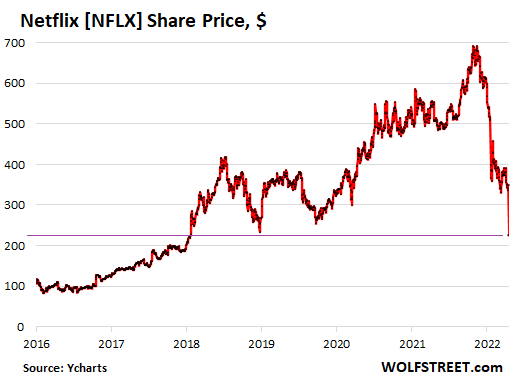 To top it off, it said it expects to lose an additional 2 million subscribers in the current quarter (Q2), while analysts were expecting growth of 2.55 million subscribers. Gone are the days when the company grew its subscribers at a rate of 25 million a year. Now it cannot even hang on to them anymore.

Subscriber-growth-come-hell-or-high-water had been the name of the game for Netflix, given that it sells subscriptions. And now that idea of subscriber growth just collapsed.

As cause for this subscriber fiasco, it listed every imaginable problem in the world, from “increasing inflation” and “sluggish economic growth” to Russia’s invasion of Ukraine, to, well, competition.

Turns out, competition “is creating revenue growth headwinds.” It said that “over the last three years, as traditional entertainment companies realized streaming is the future, many new streaming services have also launched.”

And the shares of its competitors also got roughed up a little today on fears of dropping subscribers:

If you don’t know what to do, do two U-Turns.

Netflix is going to combat those evils of competition and subscriber losses with two possible strategy changes: A potential dive into advertising and a crackdown on password sharing.

The company said that it is considering a move into advertising, which is precisely what CEO Hastings had spurned and brushed off all these years. Hastings said in an interview that they would try to figure it out over the next year or two.

In terms of the crackdown on password sharing, Hasting said that they have been working on it for two years. In its letter to shareholders, Netflix said that an estimated additional 100 million nonpaying households are using the accounts of its 222 million paying subscribers. The crackdown on password sharing would be an interesting turn of events after having for years blown off this well-known issue as largely irrelevant.

Hilarity broke out among analysts.

After the stock collapsed by 68%, and not a second earlier, analysts fell all over each other downgrading the stock and cutting their price targets. You just cannot make this stuff up.

They all should have put a sell rating on the stock in November to get their clients out of it in time. Anyone who took these analysts seriously before today got cleaned out by events. For example:

UBS analysts cut their rating on the stock to neutral from “buy” before the collapse, and they lowered their price target from $575 to $355 a share.

Pivotal Research cut its rating on the stock two notches, from buy to sell, and skipped neutral, and more than halved their price target from $550 to $235.

Wells Fargo analysts lowered their rating on the stock to equal weight from overweight, and slashed their price target by half to $300.

J.P. Morgan analysts, pointing out that “there’s not much to get excited about over the next few months beyond the new, much lower stock price,” lowered their rating to neutral from overweight, and more than halved their price target from $605 to $300.

In dollar terms, the market cap of Netflix plunged to just $100 billion today. Since the peak in November, $206 billion have evaporated. This is money that shareholders thought they had and now don’t have. So we have to begin dismantling the erstwhile glorious FANGMAN. Now it’s just FANGMA without the N.