But wait… Many home buyers had mortgage rates that were guaranteed when rates were much lower.

The rate of inflation in Canada spiked to 6.7% in March, from 5.7% in February. The Bank of Canada hiked its policy rates twice so far this year, including by 50 basis points in April, and announced that QT would start on April 25. Government of Canada bond yields have spiked. And home buyers, after home prices have surged for years, now face much higher mortgage rates, triggering the worst affordability crisis ever. Home sales volume fell 16.3% in March from the record a year earlier, according to CREA. And supply of homes listed for sale rose from historic lows to 1.8 months.

The two-year yield of Government of Canada bonds spiked to 2.58%, the highest since 2008: 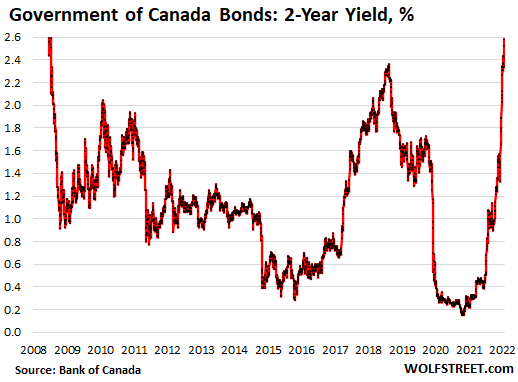 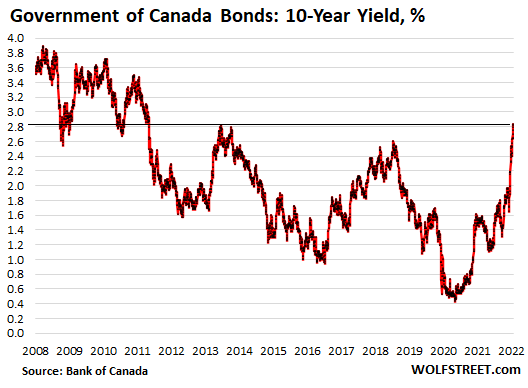 Many home buyers still got mortgage rates that were guaranteed when they first applied for a mortgage some time ago before the most recent spike in interest rates. They’re still buying with those lower rates. But buyers applying for mortgages now to buy a home in the near future face those higher mortgage rates.

The most splendid housing bubbles.

Now we have the housing bubble data for March from the Teranet-National Bank House Price Index, which represents the three-month average of closed sales in January, February, and March. So it covers sales where buyers had mortgage rates that were guaranteed in prior months, including late last year and early this year, when mortgage rates were still far lower. The impact of those higher mortgage rates has not yet shown up. But the impact will show up over the next few months.

On this backward-looking basis, home prices spiked ridiculously in some cities, rose in others, and declined in one of them.

Hamilton, Ontario, now the number one most splendid housing bubble in Canada, blew by Vancouver and Toronto in terms of the price gains since 2002. Prices spiked by 3.2% in March from February, and by 28.5% year-over-year. The index is up 307% from January 2005. 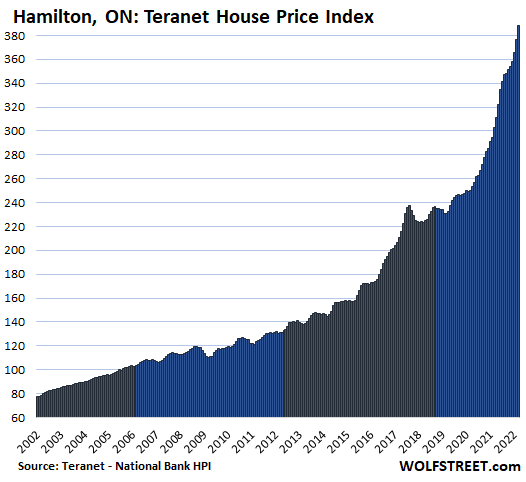 In Greater Vancouver, house prices jumped by 1.8% for the month, and by 16.7% year-over-year. Prices started falling in mid-2018, and the market remained soft until the BoC’s miracle handiwork began bailing it out in the spring of 2020. 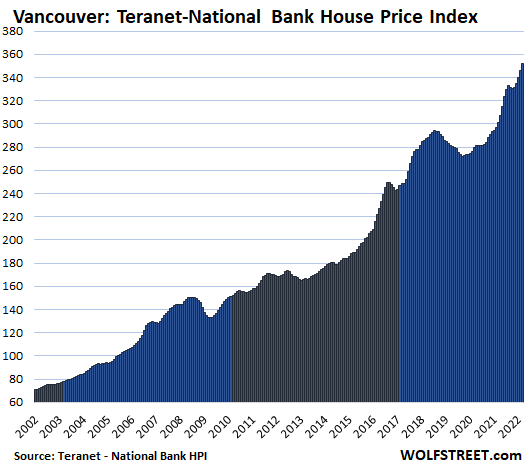 In the Greater Toronto Area, home prices spiked 3.1% for the month and by 22.3% year-over-year. In 2017, prices began to unwind and then hobbled sideways until the BoC’s reckless monetary policies performed a miracle: 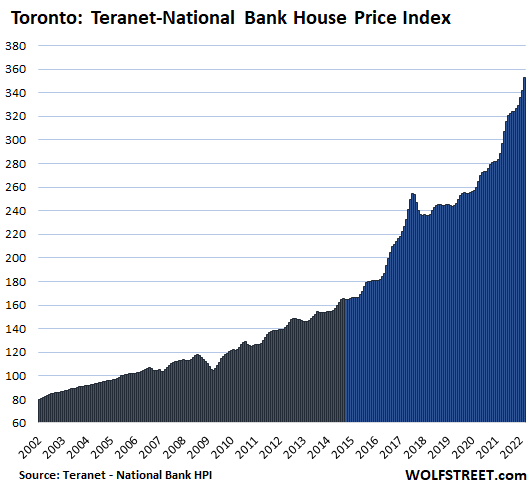 In Victoria, house prices rose by 1.2% for the month, and by 22.8% year-over-year. Prices had flattened from mid-2018 until money-printing by the BoC re-ignited it: 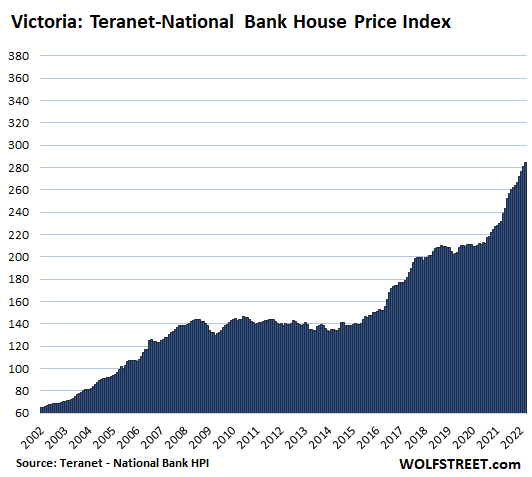 In Winnipeg, house prices rose 0.8% for the month and 11.9% year-over-year. Even here, the BoC’s miracle was able to fire up house prices that had wobbled sideways for seven years: 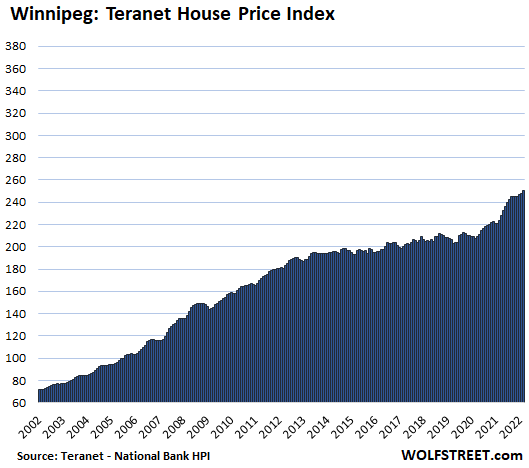 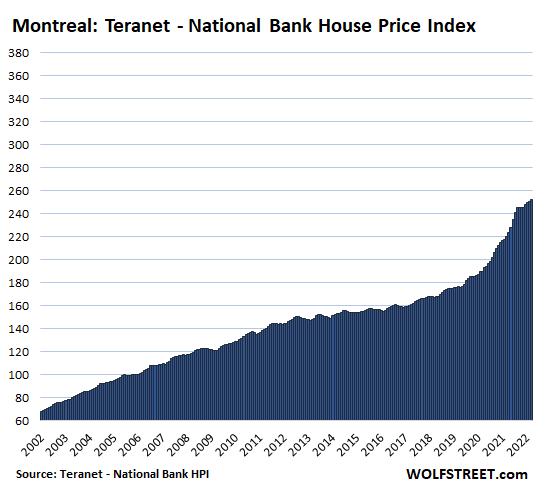 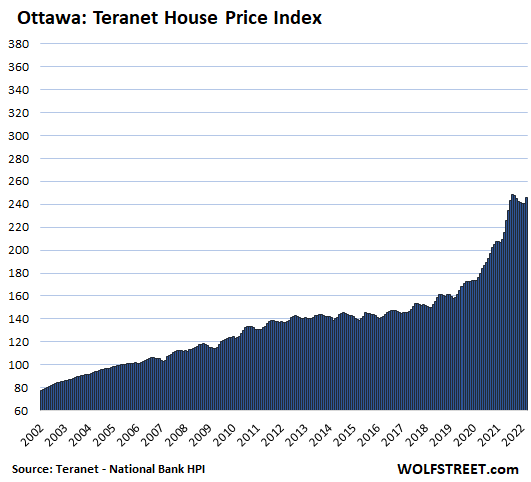 In Halifax, house prices spiked by a ridiculous 5.0% for the month, and by 34.7% year-over-year, the 11th month in a row of year-over-year price spikes of around 30% and higher: 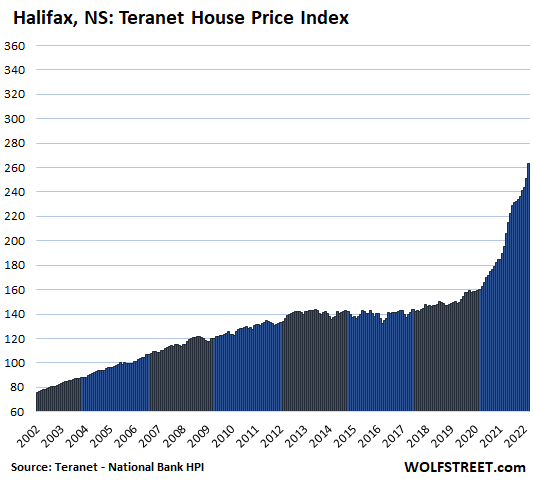 In Quebec City, house prices fell 0.6% for the month, the third month in a row of declines, which whittled down the year-over-year gain to 6.6%: 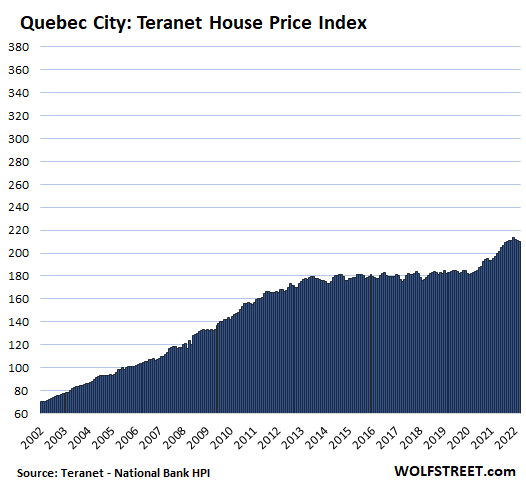 In Calgary, where house prices had been essentially flat since 2007 until the money-printing started in the spring of 2020, the index rose 0.5% for the month and 7.9% year-over-year. At this point, the index is barely above where it had been at the peak of its oil boom 14 years ago. 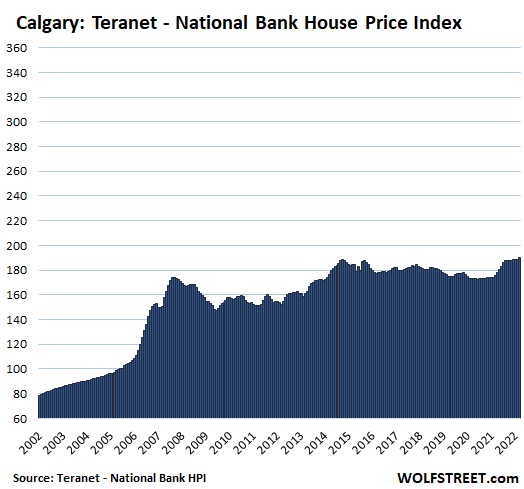 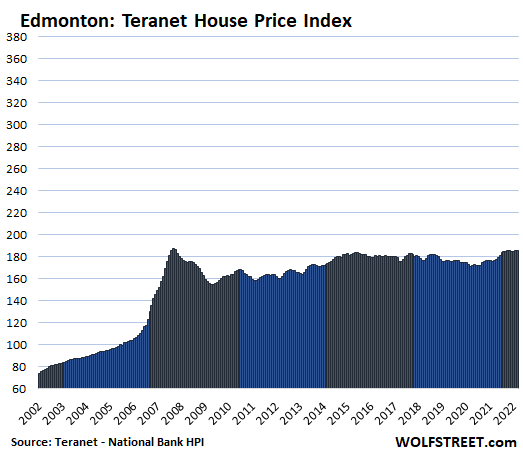 78 comments for “The Most Splendid Housing Bubbles in Canada, April Update, as Yields Spike & Bank of Canada Hikes”