“The economy can handle higher interest rates, and they are needed.” The BoC is way behind the curve, but way ahead of the Fed.

“Interest rates will need to rise further,” governor Tiff Macklem said in the opening statement.  The economy is “moving into excess demand” and inflation is “persisting well above target,” he said.

“The economy can handle higher interest rates, and they are needed,” he said. Interest rates would continue to rise “to more normal settings,” which would be the “neutral” rate, which the BoC estimates to be somewhere in the 2% to 3% range. “We may need to take rates modestly above neutral for a period to bring demand and supply back to balance and inflation back to target,” he said.

The official Quantitative Tightening will begin on April 25, the BoC said. it will no longer buy any Government of Canada (GoC) bonds at all, and it will let maturing bonds roll of the balance sheet without replacement, which will shrink the balance sheet.

The unofficial Quantitative Tightening began a year ago. The BoC already shrank its balance sheet by 15%, from C$575 billion in total assets at the peak in March 2021, to C$487 billion as of last week. In March 2021, when it announced this QT, it specifically denied that this was QT, just like when it denied in late 2020 that it was “tapering” when it started tapering its purchases of GoC bonds and ended entirely its purchases of MBS.

The BoC already shed or sharply reduced its other assets that had been part of the Covid money-printing binge, particularly its repos, now down to just C$15 billion (green), and its short-term Canada Treasury Bills, now down to zero (purple): 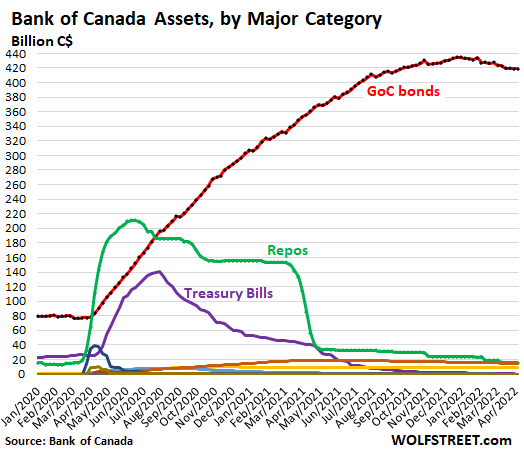 Assets to be “far lower than the current level.”

The biggie left on the balance sheet are the GoC bonds, and as they mature, they’re going to roll off, which is what the BoC announced today. But how low will they go?

“The longer-run level” of its bond holdings “is yet to be determined, but it is far lower than the current level,” the BoC said in a separate market notice.

How far behind the curve is the BoC?

But the BoC is way ahead of the Fed, whose policy rate target is 0.50% at the upper end, even as CPI inflation has exploded to 8.5%.

But markets have started chasing after inflation.

Interest rates started reacting to expected rate hikes in September 2021. The two-year Canada Treasury yield soared from 0.4% at the time to 2.33% today, after having hit 2.43% on Friday. Both of them the highest since 2008. This is a huge move in short-term yields.

For the Canadian housing market – where most mortgages are either variable-rate or “fixed rate” with relatively short terms, such a “two-year fixed” or a “five-year fixed” rate – the shorter-term yields are very impactful.

This was a massive series of jumps in the yield leading up to the 50-basis-point hike today and QT: 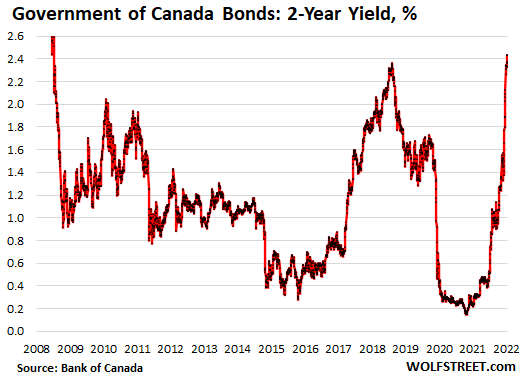 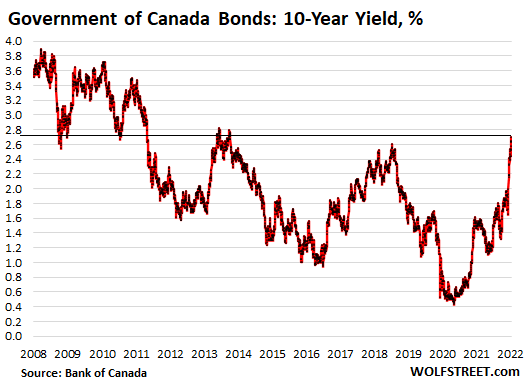 “Inflation is too [damn] high.”

“Inflation is too high. It is higher than we expected, and it’s going to be elevated for longer than we previously thought,” Macklem said in the opening statement.

“The Bank’s primary focus is inflation. We are acutely aware that already-high inflation has risen further above our target,” he said.

More rate hikes to tamp down on “overall demand.”

“By making borrowing more expensive and increasing the return on saving, a higher policy interest rate dampens spending, reducing overall demand in the economy. And with demand starting to run ahead of the economy’s supply capacity, we need that to happen to bring the economy into balance and cool domestic inflation,” he said.

“The economy has entered this period of excess demand with considerable momentum and high inflation, and we are committed to getting inflation back to target,” he said.

The BoC also lowered its forecast for Canada’s growth in 2022 to a still red-hot 4.25% and a very strong 3.25% in 2023. It said that robust business investment, labor productivity growth, and higher immigration will add to productive capacity, while the rate hikes would moderate growth in domestic demand, which should help balance the economy. That’s the plan.