The Producer Price Index for Final Demand spiked by 1.4% in March from February, and by 11.2% from a year ago, both the biggest and worst spikes in the year-over-year data going back to 2010, the Bureau of Labor Statistics said today. After having been stuck at around 10% for four months in a row, producer price inflation has now broken out – to use a stock trading term.

The PPI Final Demand tracks the input prices for consumer-facing industries whose selling prices are picked up in future months by the Consumer Price Index which yesterday, WHOOSH, already hit 8.5%. The PPI Final Demand shows what’s in store for the CPI in future months. And there is no “softening” in store, and it’s the PPI for services that has now started to spike.

For the past 15 months, producer prices have soared relentlessly. Five months in a row of double-digit producer price inflation is quite something. And the breakout today is remarkable. 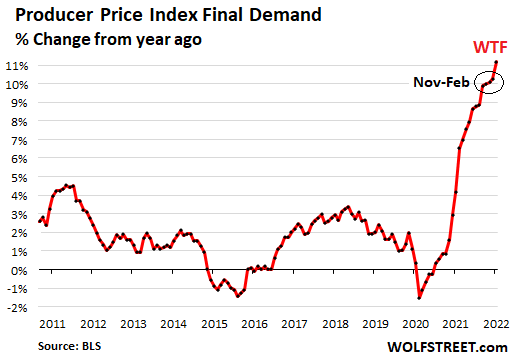 Without the volatile food and energy costs, the core PPI spiked by 1.0% in March from February and by 9.2% year-over-year, the highest in the data, having relentlessly pushed higher since late 2020: 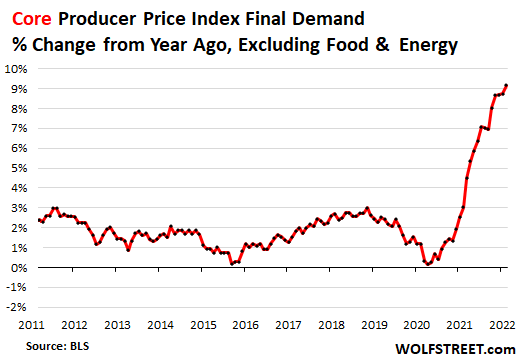 And services! The Producer Price Index for Final Demand Services spiked by 0.9% in March from February and by 8.7% year-over-year, the highest in the data going back to 2010. 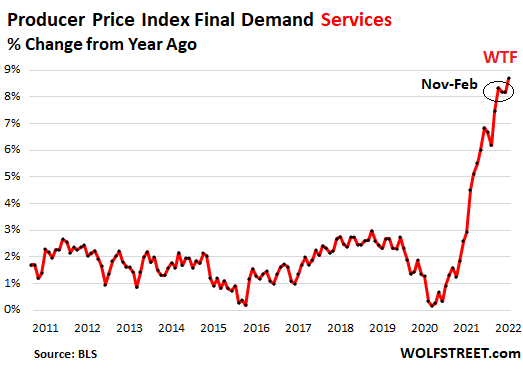 What companies all along the supply chains have figured out is that they can pass on cost increases to the next company and to consumers. And consumers have been playing along eagerly, having switched from being fairly astute buyers and price shoppers to paying whatever. This is the inflationary mindset that has taken over.

This inflationary mindset suddenly bloomed and blossomed because of two huge unprecedented factors:

Under this flood of money, leading to the most grotesquely overstimulated economy ever, price no longer matters, and everyone has figured it out.

Price increases move across the economy in uneven waves, with the costs of some goods and services spiking while others might be stable or might even decline, and a month or two later the prices of other goods and services are spiking in a game of inflation Whac-A-Mole.

And companies have figured out that they can not only pass on the higher costs, but under cover of the now blooming inflationary mindset, they can pass on a lot more than the additional costs, leading to huge fat profit margins.

Companies always charge the maximum price they can, constrained only by their desire to reach their sales goals. When price resistance among their customers sets in, companies weigh whether to back off those price increases to stimulate volume, or keep raising prices further until some sort of ceiling is hit. With online purchases, this equation is now being recalculated in real time and constantly.

What has changed compared to 2019 is that the buyers are now infected with the inflationary mindset and are now able and willing to pay whatever, instead of pushing back. That pushback puts a damper on price increases – and thereby on broader inflation. But that pushback has now been broken from consumers on up all the way up the supply chains. The whole pricing dynamics got knocked loose.

And these double-digit increases in producer prices show that even higher inflation is heading towards consumers, and will continue to do so until consumers start pushing back, either because they’re no longer able to, or because they’re no longer willing to pay whatever. That’s far from happening, and these trillions of dollars are still floating around out there at state and local governments, companies, and consumers, and they’re going to get spent, though that spending might shift to different categories, such as from goods to services.