When it comes to publicly traded used vehicle dealers, CarMax is the adult in the room. Online-only used-vehicle IPOs and SPACs Carvana, Vroom, and Shift Technologies are losing money hand-over-fist and might never make any money selling used cars because they weren’t designed to be profitable. Their shares have totally collapsed in a spectacular demonstration of how Wall Street is systematically cleaning out stock jockeys that ended up with this stuff directly or indirectly.

But CarMax makes money. And yet its earnings report today caused its already beaten down shares to plunge nearly 10%, to $93.33, where they’d first been in 2019. They’re down 40% from the November high. The earnings report pointed at the problem that the industry itself created, while customers, befuddled by an inflationary mindset, went along with it: Ridiculous prices. But enough customers are suddenly resisting. Before we get to CarMax, let’s have a look at the three used vehicle dealers whose shares have totally collapsed.

Vroom [VRM] started trading following its enormously hyped IPO in June 2020. Its shares have now collapsed by 97% from the high in September 2020 and closed today at $2.08, another new all-time low (data via YCharts): 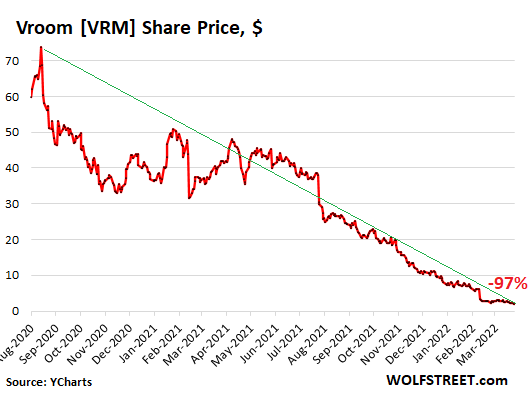 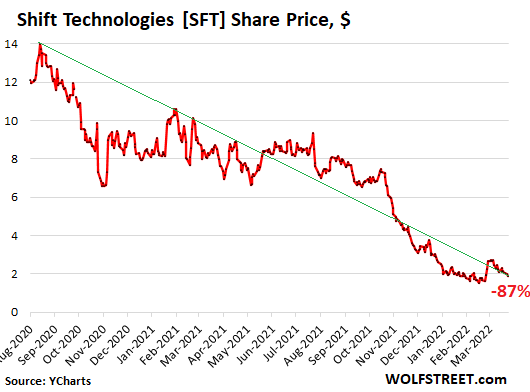 Carvana [CVNA], the original online-only used-vehicle dealer, went public via IPO in April 2017, at an IPO price of $15 a share. The hype, despite the big and increasing losses every single year for the past six years, was such that it catapulted the shares higher and higher. In August 2021, shares topped out at $376. And that was it. The great spirit of the hype suddenly vanished. Today, they closed at $100.78, down 73% from the high, and back to February 2020 levels: 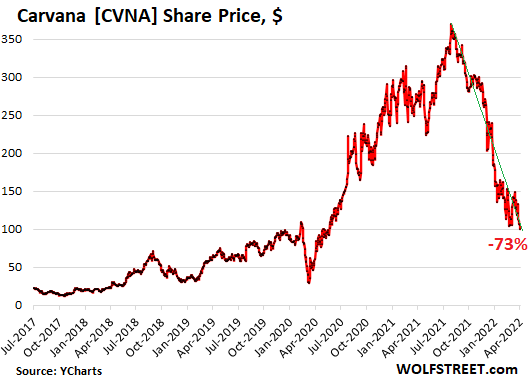 But CarMax is an industry veteran. They know what they’re doing. They’ve been making big profits for many years in the same industry where Vroom, Carvana, and Shift are losing an arm and a leg.

CarMax said today in its earnings report that its used-vehicle retail sales, in terms of the number of vehicles sold, fell by 5.2% year-over-year in quarter ended on February 28, and fell by 6.5% on a comparable store basis.

But its average retail selling price spiked by 39.7%, or by $8,300 per vehicle. In other words, its customers that did buy paid on average $8,300 more for a vehicle than they did a year ago. That’s a gigantic price increase.

Thanks to these ridiculous price increases, its used vehicle dollar-revenues spiked by 32.6%, and total revenues by 48.8%.

But this cannot be maintained. Enough consumers have had it. And their resistance is already making a dent – and that’s what CarMax alluded to today.

Across the industry, the total number vehicles sold in March by dealers to retail customers dropped 15% year-over-year, according to Cox Automotive estimates. This came despite a big increase year-over-year in tax refunds in March.

But wait.. this was in March which isn’t even included in the CarMax earnings report today for the quarter ended February 28. The unit-sales decline in the industry in March will get picked up by CarMax in its next earnings report.

“We believe a number of macro factors weighed on our fourth quarter unit sales performance, including declining consumer confidence, the Omicron-fueled surge in COVID cases, vehicle affordability, and the lapping of stimulus benefits paid in the prior year period,” the company said. Note the term “vehicle affordability.”

And the shares [KMX] got hammered down further, and are down 40% from their peak in November 2021: 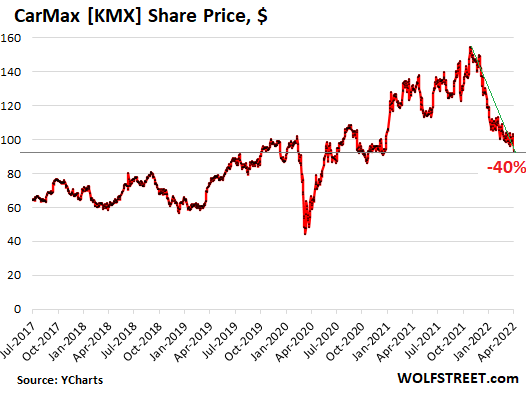 That term, “vehicle affordability” means that the industry went totally hog-wild jacking up prices, and that consumers played along for a while, paying whatever, befuddled as they had been by the inflationary mindset, and flush with the various stimulus and cash-out refi monies, left-over PPP loans, etc. that all made up part of the trillions of dollars that had been set in motion by the government and the Fed.

Now there aren’t enough of these types of befuddled buyers left, and there is price resistance, and used vehicle prices are coming down. This was picked up also by the used vehicle CPI today, which dropped 3.8% in March from February, after having ticked down 0.25% in the prior month. But the index was still up a ridiculous 35% year-over-year: 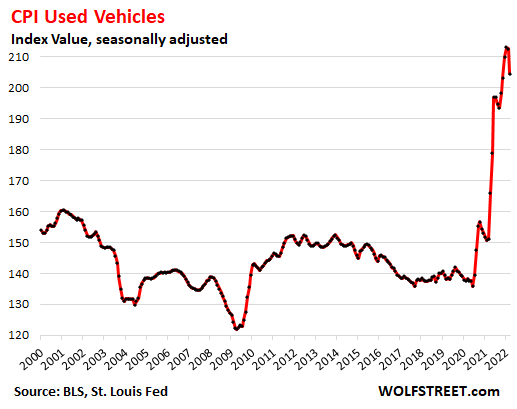 There is a problem lurking on these car lots now. As retail prices are shifting down because consumers have had it and they’re resisting those ridiculous prices, the inventory that was purchased at these ridiculous prices will squeeze per-unit gross profits. CarMax is profitable and has been around the block, and it won’t lead to an existential crisis.

But that cannot be said for Vroom, Carvana, and Shift because they already lost an arm and a leg every year, even during the best of times when the industry overall made the biggest profits ever. But now, they’re facing overpriced inventory, declining retail prices, surging operating costs, and price resistance among potential customers. In addition, just in the nick of time, the Fed is tightening financial conditions for the next few years, which will make it more difficult for money-losing companies to get funding.