Insiders front-run the announcement. Locust-swarms of Robinhood traders pile on top. Taxpayers brace themselves. Shaking my head while holding my nose.

Yesterday or today was probably the first time that many Robinhood traders had contact with something antediluvian called “Kodak,” and boy did they jump into it.

People who have been around this zoo for an additional two years remember that Kodak last was infamous for a crypto-insider-stock-grant scheme when it announced on January 9, 2018, that it would create its own crypto, called KodakCoin, which at the peak of the crypto-idiocy, caused its stock to quadruple in two days, from $3.10 to $12.40, before it re-collapsed. As you’d expect from an outfit like this, on January 8, the day before the announcement, seven independent directors had awarded themselves huge stock grants.

So, on Monday, Kodak’s shares [KODK] closed at $2.62, up 25%. On Tuesday, President Trump’s announcements started. By Wednesday morning, shares hit $60 for a microsecond, a 2,190% gain in less than two days, before giving up nearly half of it and closing at $33.20. This chart shows the daily action, including the effects of the KodakCoin-scheme: 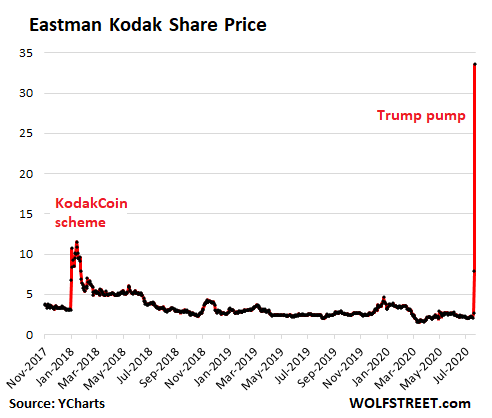 But this time it’s real fiat money, so to speak, not cryptos, and in a big way, and it smells, with Trump pulling strings personally, with Trump himself announcing on TV to the world that this outfit would get a $765-million loan from the US government, under the Defense Production Act, the first such loan the government issued.

At the White House briefing, Trump said, “Today my administration has taken a momentous step toward achieving American pharmaceutical independence — a very, very big, big step — a focus of our campaign to bring America’s critical supply chains and medical manufacturing back to the USA.  We’ve been working on this for a long time.”

And after a lot of blah-blah-blah, the President got to the nuts and bolts: “Kodak will now produce generic active pharmaceutical ingredients, which is a big deal. Using advanced manufacturing techniques, Kodak will also make the key starting materials that are the building blocks for many drugs in a manner that is both cost-competitive and environmentally safe. We’ll be competitive with almost all countries, and soon with all countries.” Etc. etc.

And Robinhood traders converged on it. Shares soared from $2.62 on Monday to $7.94 on Tuesday at the close. On Wednesday, they opened at something like $18 and under huge volume shot to $60 for a microsecond, a 2,190% gain in less than two days. Then the shares began to melt. This is today’s action: 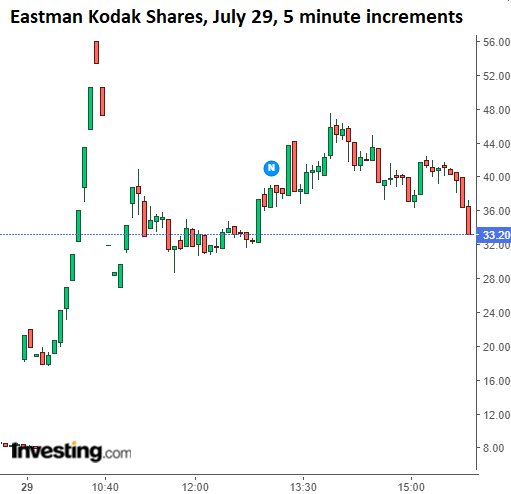 But it wasn’t quite fiat-money-handover time just yet. It was just an announcement of a signing of a “Letter of Interest.”

The DFC announced that it would sign a Letter of Interest “to provide a $765 million loan to Eastman Kodak Company (Kodak) to support the launch of Kodak Pharmaceuticals, a new arm of the company that will produce critical pharmaceutical components.”

And this is how the DFC’s announcement started out: “At the direction of President Donald J. Trump….”

OK, I got it. This time, it’s not “KodakCoin” but “Kodak Pharmaceuticals.” And this time, the POTUS himself engineered it. 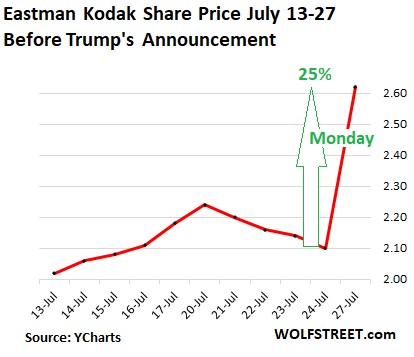 Hopefully these insiders – along with totally panicked short-sellers – unloaded their shares into the apps of Robinhood accounts at $40 or $50 or $60 – the lucky one.

There are so many amazing aspects to this story: The traders that hit that stock like a swarm of locusts, the brazen insider-trading the day before the President started pumping the stock, and not just pumping it verbally but by promising $765 million in taxpayer money to a company that has been limping along and declining since it emerged from its Chapter 11 bankruptcy in 2013. And this company is supposed to start a new division to make pharmaceutical products with zero experience in making pharmaceutical products.

This is what happens when the government borrows something like a trillion dollars every two months and throws it in every direction, with the President personally getting into the trenches and throwing his share too. All this just leaves me shaking my head while holding my nose, which is not that easy to do.