What’s good for Amazon is not good for the gander.

Amazon has a another huge bond deal in the works. Today, it disclosed that it would sell a pile of senior unsecured bonds, in seven parts, to add to its $50 billion in already outstanding bonds, in part to pay for the share buybacks. Moody’s said today that it rates these bonds A1, solidly investment grade, in line with its overall corporate rating for Amazon. In the Prospectus that Amazon filed with the SEC today, all amounts, maturities, interest, etc. are still left blank, to be filled in later.

But some details have emerged. Amazon would raise over $12 billion — amid huge demand from investors. As Amazon’s prior bond issues, one part of the seven parts is a 40-year bond. Its yield may be 1.55 percentage point above the Treasury yield, according to Bloomberg, citing a source. This might put the yield somewhere near 4.3%. Goldman Sachs Group, JPMorgan Chase, and Morgan Stanley are managing the bond sale.

Back on March 9, Amazon announced a massive bout of financial engineering to halt its sagging share price: It would split its stock 20-1 and incinerate $10 billion in cash to buy back its own shares.

By the eve of the announcement, Amazon’s shares [AMZN] had dropped 28% from the high of $3,773 in July 2021, to $2,720 on March 8, amid endless headlines that its stock was in a “bear market.” Then on March 9, Amazon comes up with the stock split and the $10 billion cash incineration program, and WHOOSH go the shares, surging by 24% in three weeks to $3,386 by March 29, just 10% below its closing high in July. That was a very effective application of financial engineering.

Since then, the effects of this masterful financial engineering have faded and the shares have given up much of those gains and by today have dropped back to $3,015 at the moment shortly before the close, including the 2.4% drop today, down 20% from the high (data via YCharts): 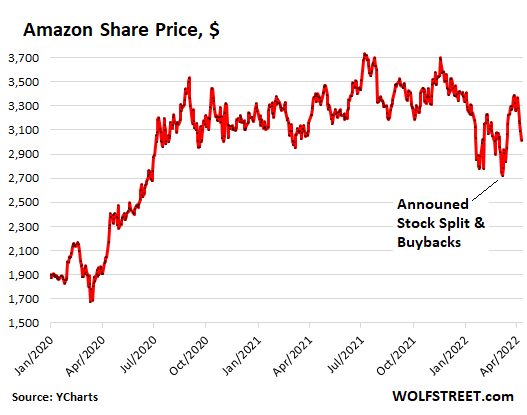 According to the Prospectus, at least some of the bonds are going to be callable, which can be an unpleasant surprise when interest rates drop and Amazon decides to replace this expensive debt with cheaper debt, and the bondholder just gets the face value back and loses the nice coupon payments and the capital gains. And Amazon warns about them:

“We have the right to redeem some or all of the notes prior to maturity. We may redeem the notes at times when prevailing interest rates may be relatively low. Accordingly, you may not be able to reinvest the redemption proceeds in a comparable security at an effective interest rate as high as that of the notes.

Amazon has a history of issuing callable 40-year bonds, and then calling them when it’s good for Amazon and bad for the bondholder, namely when yields have dropped and cheaper funding is available, which would normally push up the price of the bond, but Amazon pays them off at face value.

Little upside: For example, the $16 billion in bonds that Amazon sold in 2017 to fund its acquisition of Whole Foods also included $2.25 billion of callable 40-year bonds, with a juicy coupon of 4.25%, that Amazon then called in mid-2018 at face value. Folks who thought that they’d get the steady coupon payments of 4.25% for 40 years got instead their money back and had to kiss those nice coupons and capital gains goodbye.

Huge downside: When yields rise, as they’re right now, the bondholders get stuck with a bond whose price is plunging, and Amazon isn’t about to call them. In June 2020, with perfect timing, Amazon sold a pile of bonds at the record-low interest rates and yields prevailing at the time. It included $2 billion in 40-year bonds, with a coupon of 2.70%. Alas, interest rates have surged since then. And inflation has exploded. The three-year Treasury yield is now 2.75%, and CPI inflation is nearly 8%, and Amazon isn’t about to call its cheapest-money 2.7% 40-year bond, which matures in 2060. 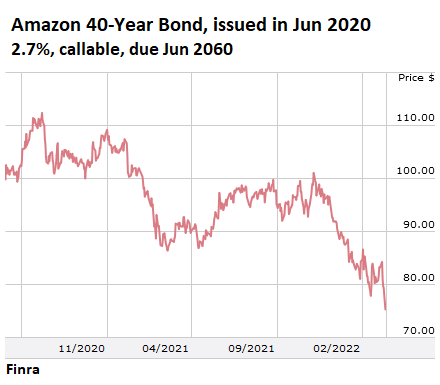 Amazon is a huge and very profitable company, with a net profit of $33 billion in 2021. It’s the dominant online retailer. It bought Whole Foods in 2017 to muscle its way into grocery retailing. Amazon Web Services (AWS) is an immensely profitable provider of data centers and cloud services. Amazon has moved into advertising in a big way to compete with Google. It creates entertainment content, and has expanded into entertainment with its $8.5 billion acquisition of MGM Studios in March. Amazon has gotten so big that it can do pretty much whatever it wants to.

And surely, investors will be clamoring for its bonds, including those 40-year bonds. If it turns out that they’re also callable, their prices will drop as yields rise, which is likely in this environment; and if yields fall, and a capital gain could be in the works for those bond holders, or just the enjoyment of decades of a decent yield, well, then Amazon will call them at face value and end the fun.

But there has been a lot of yield chasing out there especially among the riskiest corporate bonds, and so why not also plow into a callable 40-year bond.

137 comments for “Amazon Issues Another “Callable” 40-Year Bond: Buyers Beware. Have a Look at the Prior Deals”