Junk bond yields actually fell over the past month and are historically low.

The yields of US Treasuries have spiked in recent months to multi-year highs, and mortgage rates have spiked, and yields of investment-grade corporate bonds have spiked, and bond funds have served up losses to their investors, and investors in conservative long-term bond funds have taken the biggest hit – for example, the price of the iShares 20 Plus Year Treasury Bond ETF [TLT] has plunged 27% since July 2020 – and all kinds of mayhem has broken loose in the bond market.

Except in junk bonds, and especially in the riskiest sections of the junk bond market, where a maniacal chase for yield continues to rage as yield-chasers don’t think that the Fed’s tightening applies to junk bonds, when in fact it applies to junk bonds a lot more than investment grade corporate bonds or Treasury securities because it will tighten financial conditions – that’s the Fed’s expressed goal – which will make it more difficult for many of these junk-rated companies to issue new debt to service and pay off existing debts, which is what keeps these companies that make up the riskier end of the spectrum from defaulting on their existing debts.

So here we go… 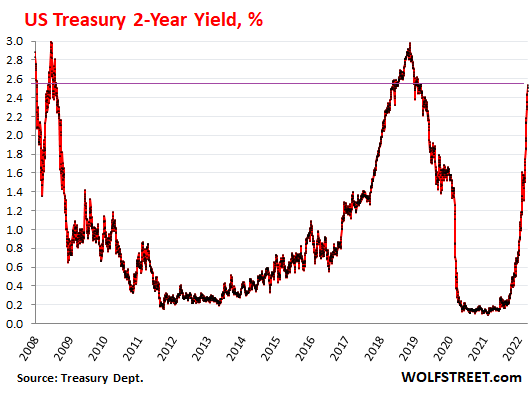 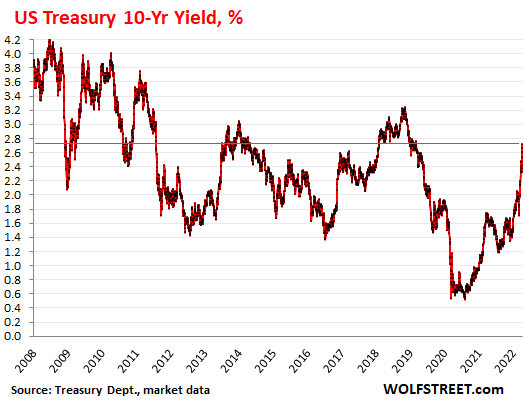 Back in 2018, the Fed raised rates four times and was shedding assets on its balance sheet, at a pace capped at $50 billion a month. Inflation was below or at the Fed’s target. In December 2018, Powell began to buckle under Trump’s incessant attacks and reversed course.

Now inflation is nearly three times the Fed’s target and has turned into a political bitch for the White House, and the Fed is under pressure to bring it back down, which it won’t succeed in doing for a long while. But instead, the Fed will chase it higher with too-slow rate hikes and too timid Quantitative Tightening, after having committed policy error after policy error for the past two years, and after having exacerbated these policy errors starting in January 2021, when the Fed began to blow off this surging inflation. So now, there won’t be a Powell pivot to lower rates. Those rates will keep going higher, too slowly, and everyone knows it.

High Grade AA-rated corporate bond yields have been rising too, but since mid-March more slowly than the equivalent Treasury yield, a sign of some yield chasing, with the average yield rising to 3.37%. 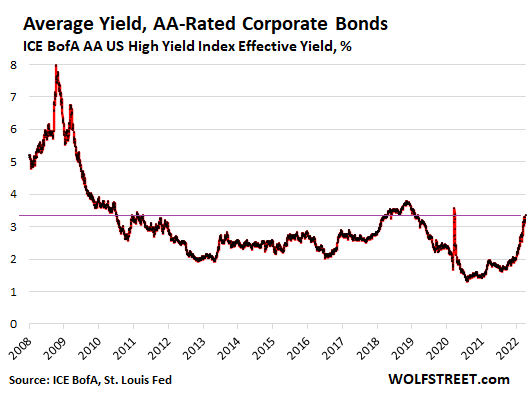 Mania at the riskiest end of the junk bond spectrum.

Single-B rated junk bonds, however, rose only modestly since September 2021, and fell since mid-March 2022, while Treasury yields were spiking. On March 15, they’d reached 6.72%. At the end of last week, they were down to 6.48%, which remains historically very low.

And this yield is still below the rate of CPI inflation! Investors are taking huge risks for still negative, but less negative, real yields. 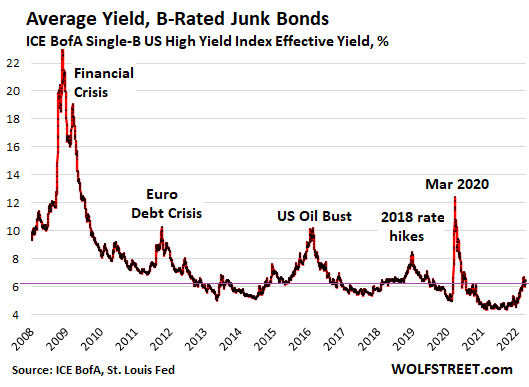 CCC-or-below-rated junk bonds comprise the highest risk category of companies, those whose cash flow isn’t nearly enough to cover debt payments, and with big losses – companies are borrowing on borrowed time, so to speak. This category of bonds ranges from “substantial risk” for CCC-rated bonds to “Default imminent with little prospect for recovery” for C-rated bonds. The next step down is D for default, according to my corporate bond credit ratings guide.

The average CCC-or-below-rated bond yield also fell from mid-March (10.36%) to 10.11% currently. Over this period, as Treasury yields spiked, the spread to Treasury yields narrowed by 81 basis points, a sign that this end of the market is in total la-la land.

This is also the category of bonds to which investors flee to get a yield that is above the 7.9% CPI inflation rate. And they’re taking huge risks to their capital, just to hedge against inflation.

The current average yield, at 10.11%, is near historic lows. Many of these bonds tend to default when the financial conditions tighten to the point where the companies run out of investors to provide new money to pay off existing investors. At that point, a debt restructuring, often in bankruptcy court, can be the consequence, with holders of these bonds taking big losses as these bonds may have been unsecured, or secured by collateral that has become nearly worthless. 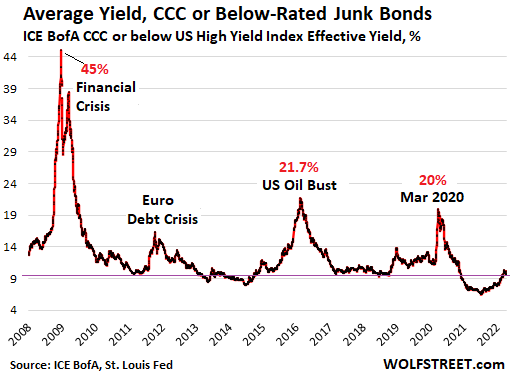 What this means is that junk bonds are having some catching up to do, and these companies that don’t have enough cash flow to service their debts are going to face a new reality of tightening financial conditions, which is what the Fed has set out to do by tightening monetary policies. But for now, that segment is in la-la land where investors are still maniacally chasing yields.

105 comments for “As Treasury Yields Spiked, Junk Bonds Did the Opposite: Still Maniacally Chasing Yield in Riskiest La-La Land”