The end of QE “is very likely to happen in the course of the third quarter with a high probability that it will be early in the quarter if numbers continue to be the way we have seen them,” President Christine Lagarde told CNBC in an interview today.

“But we have to be data dependent and we will be sequential,” she said.

With “data dependent” she means the ECB will watch with stunned open mouth how inflation is now raging further and deeper and more insidiously into the economy, tearing up the ECB’s philosophy that NIRP and QE don’t destroy the monetary system.

And with “data dependent” she also means that the tightening schedule will keep getting sped up – as they have been doing it all year – because the inflation data keeps getting worse.

With “sequential” she means that QE will end first before rates are being hiked. So if QE ends early in Q3, rates could be raised starting in Q3, rather than Q4.

And now it’s not just once before year-end. “How much, how many times, remains to be seen,” she said, leaving the number and size of the rate hikes up to our imagination.

This has now been the crescendo all year: Every time someone at the ECB says something, it’s a little more hawkish – if that’s the right term – than before, and everything is getting moved forward. The taper has already been sped up. Now the end of the taper is being further sped up. And the rate hikes are being sped up.

The ECB’s deposit rate is still negative (-0.5%), and some banks are charging their customers, even retail customers, for their deposits, thereby turning interest rates into ECB-inflicted punishment rates.

Now the bets are lining up that the ECB will abandon NIRP this year, and raise its policy rate above 0% before the end of the year, something that ECB Governing Council member Pierre Wunsch suggested this week.

While the raging inflation in the US is terrible, with CPI inflation at 8.5% in March, in numerous EU countries, it is much worse.

In many of the non-euro countries in Europe, central banks have for nearly a year jacked up interest rates to slow down the surge of inflation, including some shock-and-awe surprise rate hikes by the Czech National Bank, the National Bank of Poland, and the Central Bank of Iceland (here’s my February update on this). The ECB gas been the laggard.

But this inflation shock is not kidding around:

The ECB’s NIRP policy, and its policy of buying not only government bonds and housing bonds, but large amounts of corporate bonds — echoed by other central banks in Europe that had similar programs — has created the greatest corporate bond bubble of all times, with even the average euro junk bond yield falling to a ridiculously low 2.1% in November 2017. And still in September 2021, it was back at 2.25%, for an average junk bond!

And now, for these hapless bondholders, the cherry on this toxic cocktail is raging inflation that is pushing the real yield of these junk bonds, based on the yields that buyers locked in when they bought the bonds, deeply into the negative.

Many of these junk bonds, purchased in the years when the ECB’s policies whipped them into frenzy, will turn out to be breath-takingly painful instruments. Bad deals are made in good times.

Prices of these euro junk bonds are now tumbling as investors are trying to shed them before if gets even worse. And yields are surging.

The average junk-bond yield has more than doubled in six months, from 2.25% in September last year to 4.65% now. 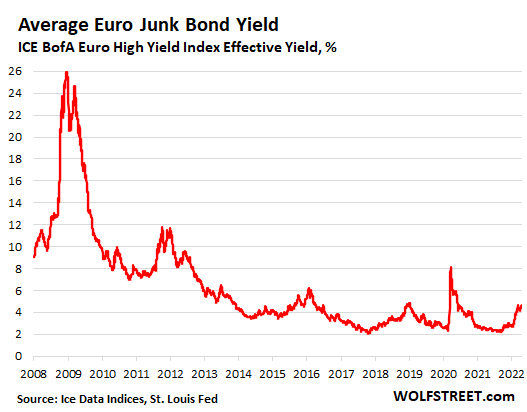 And that’s just the beginning, because the ECB is still buying a smattering of bonds, and its deposit rate is still negative. Those yields have a long way to go, and investors that had been chasing yield in NIRP zone where the central banks did everything they could to kill yield, well, they will find out once again that chasing yield is one of the most expensive hobbies out there.

These junk bond yields are set to double again, and they could then double again, which will jack up the cost of borrowing for junk-rated companies, and that will cause a lot of cleansing out of the zombies at investor expense.

133 comments for “Tightening Comes Even to Ridiculous ECB Sooner, Faster as Seven EU Countries Hit by 10%-16% Inflation, Four by over 9%”