Insiders dumping big portions of their stakes after historic share-price spikes is a sight to behold.

Of the 1.67 million shares he held in the morning of November 22 going into this wholesale dumping exercise, he sold 838,584 shares, and at the end of the day, his stake had shriveled to 816,101 shares. The proceeds from the share dump totaled $285.3 million.

The run-up in the share price has been huge. Since Nadella was appointed CEO of Microsoft in February 2014, following the retirement of Steve Ballmer, shares of Microsoft have risen by 800%, in a near perfect and dizzying exponential curve that defied gravity, with well over half that gain in the last 20 months, giving the company a market capitalization of $2.5 trillion.

This exponential curve came after the stock languished for over a decade 50% below the dotcom bubble peak.

I mean, a perfect time to sell for an insider who just might be worried that this beautiful exponential curve might not last, and that it might be better to hold $285 million in Treasury securities or whatever than this red-hot sky-bound stock. In fact, the dotcom bubble and bust might have taught a few folks an actual lesson: 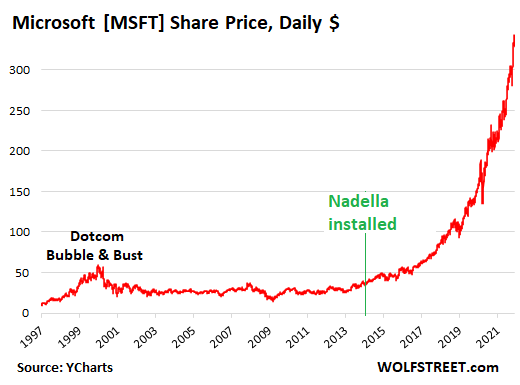 One reason that “analysts,” cited by the Wall Street Journal, proffered for Nadella’s 50% share dump – but this reason doesn’t make sense, as we’ll see in a moment – was Washington State’s imposition of a 7% tax on long-term capital gains starting next year.

But it doesn’t make sense because who cares about a 7% tax when you can make another 800% by holding on to the shares and letting them explode even higher?

It only makes sense to dump half your stake in one day if you, the insider, think that there won’t be any further gains going forward, and the new capital gains tax will be just another expense, without gain, or that the tax might even come on top of the unwinding of the exponential spike, kind of a repeat of the dotcom bust, and that it would be better to hold Treasury securities at least temporarily.

Nadella thereby, but on a much smaller scale, follows in the footsteps of Tesla CEO Elon Musk who shed a large number of shares of Tesla in recent weeks after the stock’s exponential run-up. I’m certainly cannot blame these insiders for selling big portions of their stakes after these mind-boggling price spikes.