It has been manna from the heavens, in terms of what the Fed’s policies have done for companies that feed on investors’ hunger for junk-rated debt and high-risk bets. Private-equity firms have announced $944 billion in buyouts in the US so far this year, by far the highest ever for any full year, and up by 86% from the prior record in 2015, according to Dealogic, cited by the Wall Street Journal: 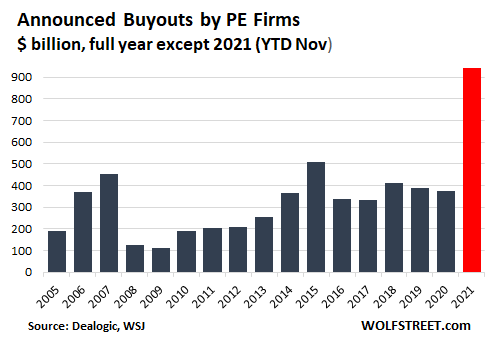 Among the biggest deal announcements over the past few weeks:

In 2021 so far, PE firms have raised $315 billion in capital to plow into acquisitions in North America, which increased their available pile of cash for this to a record $756 billion, according to data from Preqin, cited by the WSJ. And they are continuing to raise mega-funds.

When PE firms engage in a leveraged buyout, they use some equity capital but fund most of the acquisition by having the acquired company borrow the funds itself via issuance of leveraged loans or junk bonds – hence “leveraged buyout” (LBO). The PE firms thereby shuffle the risks off to investors in those debt instruments.

Following the Fed’s yield repression, there has been ravenous appetite for this type of risky debt that enabled PE firms to go out and splurge on these buyouts.

The issuance of junk bonds and leveraged loans soared to $1.02 trillion in 2021 through November 12, beating by far the full-year record established in 2017 ($780 billion), “as speculative-rated companies have amassed cheap funding from yield-hungry investors,” according to S&P Global Market Intelligence. 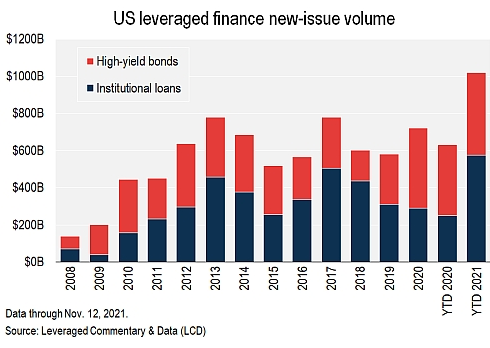 The amount of leveraged loans issued to fund buyouts soared to $305 billion in 2021 through November 12, easily beating the full-year record of 2018 ($275 billion), according to S&P Global. Of that $305 billion, a record $224 billion was borrowed by the acquired companies themselves to fund their own leveraged buyout.

The amount of junk bonds issued to fund buyouts through November 12 reached $103 billion, less than $1 billion below the full-year record of 2014: 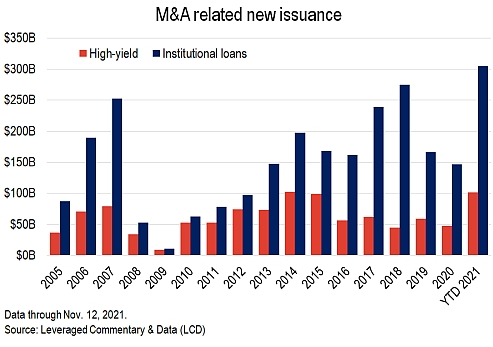 And thanks to the greatest chase for yield ever, instigated by the Fed’s monetary policies, the average yield-to-maturity of newly issued leveraged loans used for LBOs dropped below 5% for the first time ever this year, according to S&P Global.

History is full of companies that were acquired through an LBO and, burdened with too much debt, eventually filed for bankruptcy after the PE firms were able to take their profits via fees and special dividends that the acquired companies paid with borrowed funds, leaving investors in the debt hang out to dry.

Toys ‘R’ Us is among the more famous examples. PE firms KKR, Vornado Realty Trust, and Bain Capital acquired its publicly traded shares via a $6.6 billion LBO in 2005 and funded the acquisition largely by loading up the retailer with debt. With little skin in the game, the PE firms extracted $400 million in fees. In September 2017, Toys ‘R’ Us filed for bankruptcy and was dismembered in 2018. Investors in its bonds got crushed.

A whole slew of other retailers that had been acquired in LBOs by PE firms during the pre-Financial-Crisis LBO boom filed for bankruptcy since 2017, constituting the first stage of the brick-and-mortar retail meltdown, with many of them getting liquidated.

TXU, the Texas utility, is another example. It was acquired in 2007 by PE firms led by KKR, TPG Capital, and Goldman Sachs, during the pre-Financial-Crisis LBO boom, at the time the largest LBO ever. It filed for bankruptcy as the renamed Energy Future Holdings, in 2014.

In the run-up to the Financial Crisis, everything and anything was possible because investors that bought this junk-rated debt didn’t care anymore. They were enamored with these LBOs and just blindly chased yield. But this time, it’s different, as they always say.

Meanwhile, the average yield for B-rated junk bonds rose by around 90 basis points, from the June and September record lows of below 4.4% to 5.3%, the highest since November 2020, and above the pre-pandemic lows in January and February 2020. Despite the 90 basis point jump, it remains ridiculously low. And the average spread between B-rated junk bonds and Treasury securities widened by about 65 basis points, from 3.5 percentage points at the beginning of November to 4.15 percentage points as of Friday, the widest spread since February 2021, but it too remains ridiculously tight. 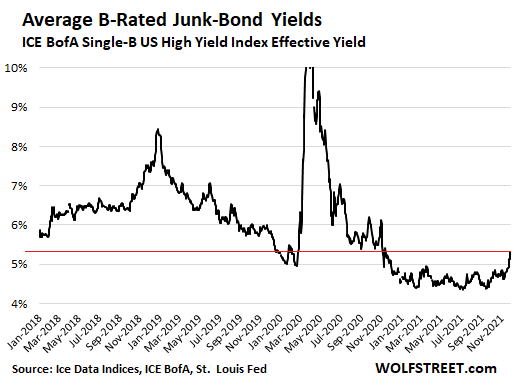 154 comments for “Junk Bonds, Leveraged Loans, Buyouts by PE Firms, All Blow Past Records in Massive Chase for Yield amid Fed’s Easy Money”