The end of a truly amazing era.

So now we’ve got another stock that went public less than a year ago and then collapsed unceremoniously by 82%, including today’s 29% plunge upon the news last night of a minuscule revenue increase, a hit to revenue guidance, and another big loss. This misbegotten Wall Street Hype & Hoopla product has now taken down just about every investor that ever touched it.

For about a year now, I’ve been screaming about IPO stocks and SPAC stocks that had been hyped to the nth degree by the Wall Street Hype & Hoopla machine, and their shares were then sold to the public at huge valuations and, after a quick “pop,” promptly collapsed, one after the other.

The last time I’ve seen anything like this was during the dotcom bust. But this here feels a lot worse because it’s just the beginning and the overall indices haven’t plunged yet, though they’re down some.

And this Hype & Hoopla product screwed over befuddled retail investors, who, blinded by greed and a belief in some new paradigm, eagerly ate up this hype and hoopla that they were fed, and they got what they had coming. Yup, been there, done that.

But this is pretty thick, even by Hype & Hoopla standards.

So the stock in the sickening horror-chart below is The Honest Company [HNST] since the IPO. The IPO price was $16 a share. Trading started on May 5th, 2021, and that day, the price “popped” 50% to its all-time higher of $23.88, which gave the company a valuation of $2.2 billion – for a diaper and shampoo company with $300 million in annual sales, decorated by big losses, a tiny, money-losing company in a field crowded by giants.

The 29% plunge this morning, to $4.32 at the moment, barely registers in the overall 82% collapse since the high on the first day last May (data via YCharts): 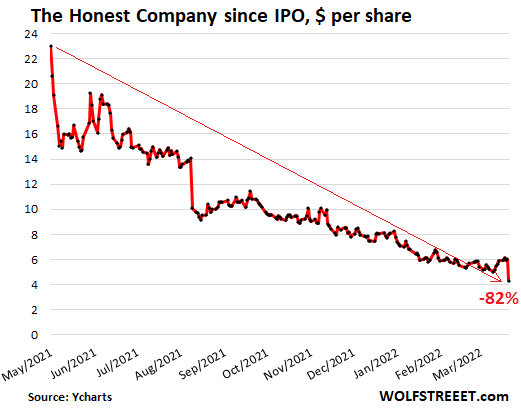 The end of a truly amazing era.

We have now seen chart after chart like this: A big price when they start trading, and maybe a “pop,” that the financial media oohs and aahs about, and a few months later there isn’t much left.

This has now been time after time the same thing, including a couple of days ago with the three BBQ grill IPO stocks. It’s not an accident. It was a systematic effort by Wall Street and its minions and the sundry insiders and pre-IPO investors to clean out hapless retail investors for as long as possible.

The fact that these stocks are now collapsing has caused these retail investors to sit up straight and pay attention, and suddenly the IPO market has essentially shut down.

How is the Wall Street Hype & Hoopla machine supposed to sell these ridiculously overpriced shares when investors are actually paying attention? Well, they can’t. And IPO volume fizzles. And this is now.

Over the past three months – December through February – the number of IPOs in the US plunged by 71% from a year earlier, to just 25 IPOs, according to Renaissance Capital. In March through the 21st, there have been only two IPOs. This gig is up.

The Honest Company reported last night that revenues, at $80.4 million, edged up only 3% year-over-year in Q4, not even keeping up with CPI inflation. And it reported a loss of $9 million for the quarter, bringing its annual loss to $38.7 million for the year, up 167% from 2020.

It reported a 68% collapse in sales of its “household and wellness” category, which includes face masks and sanitizing products. So here we go: This was another company, like the BBQ grill maker IPOs, that rode up the pandemic boom and at the very end of the boom, when everyone already knew it would end, it sold the shares to the public at a ridiculous valuation on the idea that the brief pandemic boom would be a permanent feature of the company.

The company also lowered its revenue guidance and said it would raise the prices of most of its products to deal with surging costs and inflation.

The company was founded in 2012 by movie and TV star Jessica Alba, and her Hollywood glam carried a lot of weight with customers and investors. It raised $730 million by 2018. Alba ended up on the cover of Forbes. The company got tangled up in a scandal over labeling of ingredients on some of its products, which was very embarrassing for a company running on a meme that its products were somehow “Honest.”

But OK, marketing is marketing, and a name is just a name, and I get that, and I wish the company good luck, and I hope it will make it. But the Wall Street Hype & Hoopla machine, after exacting its pound of flesh from retail investors, is finally screeching to a halt, and that’s a good thing.

154 comments for “Another Miracle-IPO Stock Collapsed by 82% since the IPO. Wall Street Hype & Hoopla Machine Screeches to a Halt”